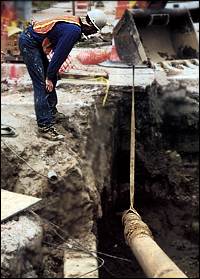 Pipe bursting proves to be a perfect match for Warren, Michigan watermain replacement and upsizing job.

The city of Warren, MI is like many cities throughout the United States and Canada. For the last several years, the city has experienced a range of problems with an outdated and undersized water transmission system installed between 1930 and 1950. The situation is not unique. In fact, some areas are even battling capacity issues with relatively new systems installed or upgraded in the late ‘60s and early ‘70s. The city of Warren was left with little choice, the mains needed to be replaced and upsized. The city did have a choice however, in the pipe replacement methods it utilized to accomplish the task. By combining trenchless pipe bursting with traditional open cut methods, the city saved time, money and disruption. The city of Warren is located just north of Detroit. It is Michigan’s third largest city, with a population of 144,000. Sections of the existing cast iron water transmission system were installed as early as the 1930s and consisted of 6-, 8-, and 12-inch (150-mm, 200-mm and 300-mm) mains with 1- and 2-inch (25-mm and 50-mm) services. According to Warren staff engineer ToddSchaedig, the existing system had been acting up for some time. Schaedig said, “Over the last several years, the city has experienced several water main breaks per year. Although PVC and ductile iron point repairs were made, it became obvious the system needed to be replaced.”

Schaedig was first exposed to pipe bursting during a trenchless technology seminar in 1997. At that time, the method had a firm foot hold in the sanitary and storm sewer markets and was beginning to emerge as a viable replacement method for potable water lines. Schaedig saw the potential of pipe bursting and felt that it should be considered for the upcoming water project. Troy Freed, of pipe bursting contractor SOS Service, Brighton, MI, said, “I met with Todd several times over the next few months to talk about pipe bursting. Our biggest concern with the Warren project was bursting the numerous point repairs. Having worked with pipe bursting equipment manufacturer TT Technologies, Aurora, IL before, I knew that if any pipe bursting tool could do the job, it was the pneumatic Grundocrack pipe bursting system from TT.” TT Technologies Pipe Bursting Specialist Larry Gross was called in for additional technical support.Gross said, “Troy has a good deal of pipe bursting experience. After looking at the job, we agreed that the point repairs could be burst with the proper tool configuration.” Schaedig was convinced pipe bursting could be a successful replacement method for this project. The city gave the go ahead to designate the job as a pipe bursting project. It would be the largest and the first of its kind in the State of Michigan.

The project called for pipe bursting over 6,800 lf (2072 m) of 6-inch (150-mm) cast iron watermain and upsizing to 8-inch (200-mm) potable water HDPE. In addition, over 1,280 lf (390 m) of 12-inch (300-mm) cast iron needed to be burst and replaced with 12-inch (300-mm) HDPE. Much of the bursting took place under heavily traveled areas including the seven lane State Highway 53, known as Van Dyke Avenue. The section of Van Dyke over the 6-inch (150-mm) watermain saw approximately 49,000 cars per day on average. The section over the 12-inch main saw over 70,000 cars per day. Existing mains also ran under sidewalks and adjacent to commercial buildings. In these areas pipe bursting would prove most valuable.In addition to bursting, several small areas were open cut, including the removal and replacement of (41) 8-inch diameter (200-mm) and (2) 12-inch (300-mm) diameter gate valves and wells. The vast majority of the project, however, was completed through pipe bursting.

The project was awarded to SOS Services last May and work began in early June. The SOS crew used a TT Technologies 8.5-inch (215- mm) diameter Grundocrack Hercules pneumatic pipe bursting system, equipped with a 10-inch (250-mm) rear expander, for the 6- inch (150-mm) mains and a 12-inch (300-mm) diameter Grundocrack Gigant with a 15-inch (380-mm) rear expander for the 12-inch (300-mm) mains. A 10-ton Grundowinch was used to guide the bursting tool through the host pipe. According to Gross, the Grundowinch played a key role. Gross said, “The Grundowinch provides constant tension at variable speeds. That was especially important for this project because of the point repairs. When the bursting tool reaches a repair it slows down as it works its way through. After the repair is burst, there is less resistance and the tool speeds up quickly. The Grundowinch compensates for this change in speed and prevents slack from developing in the line.”

Over 6,800 If of 6-inch cast iron watermain was replaced using the Grundocrack pipe brusting system with minimal surface disruption.

Also essential to the success of the job was the use of a guide head or “schnozz”. The guide head or “schnozz” is attached to the front of the pipe bursting tool and adds needed tool length. It allows the tool to get into the pipe and break it at its weakest point, the inside. Cast iron pipe tends to break several feet in front of a standard pipe bursting tool. This causes the potential for two major problems. First, the shards of cast iron pipe are sharp and can actually cut winch lines. Second, pipe fragments can build up making the host pipe impassable. This can cause the tool to change direction and veer off course. Besides adding tool length, the guide head helps protect the winch line. In many configurations, the winch line is connected to the front of the guide head instead of the front of the tool. This keeps the line ahead of the actually bursting and out of the way of shards of pipe. Gross said, “Cutting blades can be used in conjunction with a guide head. The blades are welded directly to the guide head. The blades focus the percussive action of the tool and greatly enhance overall bursting power, allowing the tool to successfully burst difficult host pipes, like cast iron as well as many point repairs like PVC.”

Too Close For Comfort

If there was ever a perfect application for a particular job, pipe bursting was for the city of Warren project. The watermain that was replaced was surrounded by potential hazards. A 9-way Ameritech conduit bank containing fiber optic cable ran parallel to the watermain, just to the west, under a sidewalk. To the east, a large 24-inch (610-mm) diameter water transmission line bordered the watermain. Moving the main further to the west, under the sidewalk, was ruled out. According to the city engineering staff, previous excavations showed many basements and footings extending into the right-of- way under the sidewalk. If a break should occur in the future, there would be a greater potential for basement and building flooding.Moving the main to the east, directly under Van Dyke, was also ruled out several reasons. First was expense. The open cut/pavement replacement expense would have been extraordinary, in addition to possible expense for any future work that needed to be done. Second, the amount of traffic disruption precluded this option. The Michigan Department of Transportation would not allow more than one lane of Van Dyke to be shut down for any extended period of time. That left two options: open cut and replace or pipe bursting. Pipe bursting’s low profile made it the method of choice. Bursting would not interfere with the Ameritech conduits or the 24-inch (610-mm) water transmission main and work could be confined to a single lane of traffic. The city would also see a dramatic reduction in amount of, and costs associated with, pavement replacement versus an open cut application. According to Schaedig, another benefit to utilizing pipe bursting was the new product pipe, high density polyethylene pipe (HDPE). He said, “The city’s clay soils conduct stray electrical currents. The old cast iron mains act as sacrificial anodes and corrode from the outside in. For the last six years, the solution has been to use ductile iron watermains with a polyethylene wrap. However, the city believed the wrap would cause difficulty in locating watermain breaks. A new watermain constructed of HDPE solved the installation problems and provided protection against the stray electrical currents.”

Burst lengths averaged one city block, approximately 270 feet (82 m). Depending on repairs encountered, bursting times averaged 20 minutes to one hour. Both the Hercules and Gigant bursting tools were able to overcome a multitude of point repairs, due in large part to the “schnozz” technology. Freed said, “Construction proceeded steadily. We initially anticipated the project to wrap up in May of 2000, but everything went so smoothly, in addition to a mild November, that we were able to finish months ahead of time.” Schaedig said, “Although work progressed at a rate comparable to open cut, disruption to the 100 or so businesses was minimal. Driveways were kept open, water users on Van Dyke were only out of water for a few minutes while being transferred on or off the temporary bypass and many side streets were open to traffic during construction.”

The Warren, Michigan pipe bursting project generated a tremendous amount of interest. It was the first and, to this date, the largest watermain pipe bursting job ever in the state. In October of ’99, during the final stages of the job, the city invited representatives from other cities and engineering firms to a demonstration of the method. Schaedig said, “The bursting and fusion demos went extremely well. 60 engineers and public officials from throughout southern Michigan attended the event. They all seemed genuinely interested in applying what they had seen in Warren, on projects of their own. I can safely say that there will be a lot more bursting going on in the state of Michigan in the future.”