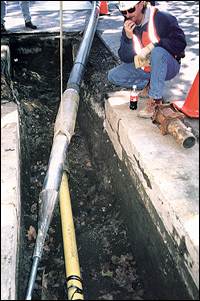 The pipe bursting tool is lowered into the launch pit. The development of guide head (schnozz) technology has made pipe bursting more effective in cast iron gas pipes.

Now the technology is beginning to become more prevalent in the gas market in North America. Large gas utilities and providers are pushing the acceptance of pipe bursting. PG&E is a prime example of a provider that has discovered the benefits pipe bursting brings to the gas industry. This is due in large part to the advances manufacturers of pipe bursting equipment have made in making pipe bursting more effective for small diameter cast iron gas mains.

Cast iron pipe tends to break several feet in front of a standard pipe bursting tool during the bursting process. This causes the potential for two major problems. First, because the shards of cast iron pipe are so sharp they can actually cut winch lines. Second, pipe fragments can build up, making the host pipe impassable. This can cause the tool to change direction and veer off course.

The guide head adds needed tool length and serves as a guide through the pipe. It also allows the tool to get into the pipe and break it at its weakest point, the inside. Moreover, it means that the diameter of the bursting tool can be bigger than the diameter of the host pipe. Therefore, under appropriate circumstances, more powerful tools can he used and longer runs accomplished.

In addition, the guide head protects the lead end of the tool from wear. Several different configurations are available. Sometimes guide heads are fabricated on site to meet the specific needs of a particular job.Cutting blades can also be used in conjunction with a guide head. The blades can be welded directly to the guide head and, again, different configurations are used in different situations. The blades focus the percussive action of the bursting tool into pressure points and can greatly enhance overall bursting power.

Tool and expander configurations also play a part in successful gas bursting. Using a small rear expander is common because many times gas lines being replaced through pipe bursting require a larger size casing pipe or sleeve to be installed first. These advances in pipe bursting technology have prompted PG&E to give pipe bursting a closer look for portions of their pipeline replacement program.

Cutting blades placed on the head of the bursting tool help focus the percussive action of the tool, enabling it to break through cast iron mechanical joints.

PG&E began its gas pipeline replacement program in 1985. The program covers the replacement and rehabilitation of over 2,500 miles of pipe, much of which is cast iron. Even halfway through the plan, PG&E is still keeping an eye on efficiency. At an estimated total project cost of $2.2 billion, it is necessary. That is why PG&E is willing to take the time to investigate new pipe rehabilitation and replacement techniques that could save them time and money. Pneumatic pipe bursting is the latest tool to find its way into the company’s tool box.

For their first bursting project in over 10 years, PG&E chose a 700-foot section of 4-inch cast iron in San Jose, CA. They enlisted the technical support of TT Technologies, a manufacturer of pipe bursting tools and equipment based in Aurora, IL. The project called for the 4-inch cast iron main to be replaced with 4-inch Medium Density Polyethylene (MDPE). A 6-inch HDPE sleeve would be installed during the burst, then the 4-inch MDPE gas main would be inserted into the 6-inch casing. PG&E Senior Construction Specialist Lenny Caldwell said, “We do a tremendous amount of directional drilling, a lot of dead insertion, live insertion, pipe splitting and pipelining.

“We view pipe bursting as another tool that works well for us in certain situations, specifically, size for size replacement of low pressure systems.”

Pipe bursting was well-suited for this particular situation for several reasons. First, the existing paving in the area was very thick: 15 inches. A trenchless solution was very desirable because it would avoid the high repaving costs associated with open cut. Second, the line would remain a low pressure distribution line requiring a 4-inch replacement. The new 4-inch line would be inserted into a casing. Pipe bursting provided an easy method for upsizing from 4-inch cast iron gas main to 6-inch HDPE casing.

TT Technologies Pipe Bursting Specialist Collins Orton said, “The 700-foot run was divided into three sections based on the number of services involved. PG&E wanted to restore full service to the customers by the end of each day. To accomplish this, we needed to maximize our time and work with smaller sections of pipe.”PG&E maintained temporary service to residents during each burst. Caldwell said, “In certain areas we will tank the individual homes with gas cylinders or manifold a tank together and feed several homes at once. Ultimately, temporary service is determined on a project by project basis.”

For the actual bursting, a 5.75-inch diameter PCZ 145 Grundocrack pneumatic pipe bursting tool from TT Technologies was chosen. The tool was equipped with a 6-inch rear expander with a 7-inch outer diameter and fitted with a guide head specifically designed for bursting cast iron. A 10-ton constant tension Grundowinch was used to guide the tool through the host pipe.

Orton said, “A guide head was essential to the success of this project. We encountered bell joint leak clamps on all bell and spigot joints, as well as double strap iron service saddles that could have hindered the bursting process if a guide head wasn’t use.”

After tweaking the tool configuration, the actual bursting went smoothly. The bursts varied from 25 to 50 minutes each. Even before the 6-inch casing was in place, the PG&E crew exposed each service connection. After the casing was installed, crews cut away sections of it at each service connection. The 4-inch carrier line was then inserted into the 6-inch casing by hand and connections were made.

Orton said, “Service tees were fusion welded directly to the 4-inch carrier line. The tee makes the actual connection to the line. It comes equipped with a built-in single-use cutting system. After the cut is made, the mechanism retains the coupon to keep the line free from obstruction.”

This service connection process took place after each burst and allowed PG&E to restore full service to each customer at the end of the day.

Since this bursting project, PG&E has done several others. According to Caldwell, plans call for applying the technology in situations where it is most beneficial. With over 1,000 miles of pipe remaining to be replaced, pipe bursting tools have found a home in the PG&E toolbox.