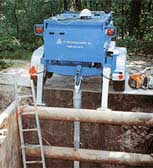 The trenchless process of pipe bursting has been gaining wide acceptance with municipalities and contractors throughout North America over the past decade.

Best known for rehabilitating municipal water and sewer lines, the rising popularity of pipe bursting is largely attributable to innovative contractors who have promoted the trenchless technology as a cost-efficient method. Another important selling point is the inherent positive social factors of little to no surface disruption.

As in Europe (where pipe bursting was developed), North America’s infrastructure is showing signs of age. Water and sewer lines often need rehabilitation as they get older. However, because of urban build-up, the traditional method of trenching to replace failed lines is no longer desirable, if not impossible to do. Therefore, contractors are frequently turning to trenchless technology such as pipe bursting as an alternative.

The pneumatic pipe bursting method’s primary application has been to replace clay sanitary sewer lines from 10 centimeters to nearly one metre in diameter. The method has also been used successfully for the replacement of water, storm sewer, gas, telephone and power casings, conduit, and duct.

Over 90 percent of bursting projects worldwide have been performed with pneumatic pipe bursting tools and equipment. This translates into nearly 10,000 kilometres of successful bursts and replacements.

About The Pneumatic Pipe Bursting Process

The bursting process starts with determining the length of &failed& pipe and exposing it at two ends (usually at manholes) to serve as entry and exit points. Then, the bursting tool with expander is positioned at the entry point. Attached to the head of the tool is a steel cable emanating from a winch located at the exit point. The winch is important because it provides constant tension, helping to guide the tool. The pneumatic tool is then launched directly into the failed pipe.

The combined effect of the percussive action of the pneumatic tool and constant tension from the winch enables the tool to effectively pound through the old pipe. The expander pushes the host pipe fragments and surrounding soil out of the way for the safe installation of the new pipe. The new PE pipe, attached to the back of the tool, follows it into the bore. Because the expander is selected with the outer diameter of the new pipe in mind, a tight fit is guaranteed. 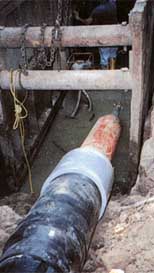 Televising of 300 metres of a 50 year old sanitary sewer line within a forest reserve near Chicago, Illinois showed a high level of infiltration. As a result, governmental agencies involved decided the line needed to be replaced.

&We had a sensitive area, very mature trees,& stated Teofilo Noriega, Village of Niles director of public services, referring to the forest reserve. Traditional methods of trench and replace were deemed unusable due to a forest service mandate that no trees could be destroyed in this easement. Noriega explained how city officials worked as a team to address to concerns of every government agency involved in order to arrive at an acceptable solution.

Initially, the trenchless method of pipe lining was considered. However, it was dismissed when officials became aware of the extent of tree root intrusion and sagging found within the pipe.

After learning about the pipe bursting process and subsequently discussing the merits of this trenchless process with contractors, municipal officials allowed bursting to be included into the bid specifications. &We’re not afraid to look at new technology,& offered Noriega.

Scott Jochim, Village of Niles superintendent of engineering, reviewed video tapes, trade magazine articles and documented case studies about pneumatic pipe bursting. Interested by what he saw, Jochim then contacted those municipalities who have had experience with the trenchless technology to get their candid reactions to it. &All responses were affirmative, so we felt comfortable giving it a shot,& said Jochim.

Prosser went through the Village of Niles specifications and worked with the LoVerde Construction staff to establish a plan of action. Runs were determined and tool requirements were discussed.

George LoVerde then compiled an estimate. Four government entities would be reviewing the bursting specifications. They included the Cook County Forest Reserve, Metropolitan Water Reclamation District of Chicago, Village of Niles Public Services, as well as the State of Illinois.

Based on LoVerde’s commitment to leave the trees in tact, along with an acceptable cost estimate, LoVerde Construction was awarded the bid. &Our team considered possible solutions, and the solution was pipe bursting,& said Noriega.

Approximately 366 metres of failing sewer pipe was burst and replaced in three runs. The first bursting run (76 metres) incorporated the upsizing of 380 millimetre clay pipe to 405 millimetre PE (SDR 17). The soil was incredibly dry, due to hundreds of trees that lined and grew above the sewer line.

Crews used a Grundocrack Gigant (254 millimetre diameter) with a front expander to perform the run. Even though a Grundomudd pump was providing bentonite lubrication to the tool and pipe, the burst proceeded more slowly than anticipated at a rate of about one foot per minute. This was also the case for the second burst (84 metres).

After considering the slow rate of the first two runs, the contractor decided to use a Grundocrack Koloss bursting tool (with rear expander) for the considerably longer third and final run. The Koloss offered a 40 percent larger diameter (356 millimetres), and nearly twice the power compared to the Gigant.

With the final leg of the burst stretching out 163 metres, there was some concern that drag would become a factor about midway through the burst due to the combination of upsizing and fill-in.

The contractor would have preferred dividing the run into two. But, that would have meant the destruction of some mature trees for additional entry and exit pits. With that in mind, crews prepared for one long burst.

163 Metres Burst In Only One Run

Crews pumped bentonite at the maximum capacity for the final run, and it helped. Moving at a rate of 500 millimetres per minute, the 163 metres of host pipe was burst and replaced in less than six hours.

The additional lubrication combined with a more powerful bursting tool added up to a successful installation. &With pipe bursting, you pull in one continuous pipe. That means the opportunity for infiltration is nonexistent,& said Noriega.

He also stated how pleased the Village of Niles staff was with the speed of installation. This offered positive social benefits because residents did not have to be out of sewer service.

Most important, according to Noriega, was, &We saved trees, we saved money.

Contractors from Monterey to Montreal have shared their pipe bursting success stories and secrets with each other in order to further the development of this trenchless technology. As a result, these innovative contractors have brought pipe bursting to new heights. In fact, pipe bursting contractors in North America hold the records for largest diameter bursts and longest single run bursts.

Not only does this bursting technology limit surface disruption that can result in negative social and environmental impacts, but it also saves millions of dollars for municipalities and helps maintain quality infrastructure for end-users.

Contractor bids to replace over 16,000 feet of failed sewer line with minimal...
Scroll to top