Maintaining and upgrading sanitary sewer systems where new meets old is a difficult proposition and problems can arise. More and more contractors are utilizing trenchless technology in these situations, but even trenchless presents its own unique set of challenges. Contractors often need to employ not only efficient, but creative solutions to these difficult situations. EJM Pipe Services Inc. of Lino Lakes, MN did just that, using one trenchless tool to help another when they employed a giant pipe rammer to rescue their tunnel boring machine.

Maple Grove, MN, a suburb of Minneapolis, is pushing its boundaries westward. The addition of large commercial and retail centers in the area created the need to increase sanitary sewer capacity. In response a $9.3 million, 17 mile, sanitary sewer interceptor project was approved to help alleviate the sewer capacity issue.

EJM Pipe Services was eventually sub-contracted to install several large, grade critical concrete sewer sections. The first 865-ft section of 60-inch OD, 42-inch ID concrete pipe would be placed under on I-94 and Hennipen County Rd. 30. A second 175-ft section would travel under a high voltage transmission line and tower.

The Grundoram Taurus sits configured for large diameter ramming. The 72-inch and 30-inch ram cones reduce the operating diameter, allowing the tool to be “connected” with the casing.

According to Mark Montgomery, EJM Supervisor, they decided to use a tunnel boring machine. Montgomery said, “The soil conditions were conducive to a jack and bore type operation. We did not anticipate any problems with the soil, but that’s usually when things go wrong.”

The TBM has a powerful hydraulic system that turns the tool’s inner drum. This particular TBM was equipped with a closed face cutter head attachment for use the sandy conditions. As the TBM rotates, spoil falls into the inner drum and is carried to a conveyor system by a small auger.

A jacking cylinder is used to push in the new 8-ft sections of high-pressure concrete pipe, which in turn help push the TBM forward. Montgomery said, “The TBM is equipped with a laser targeting device to keep it on track. It’s a very accurate system. And it needs to be, especially with a grade critical bore for a gravity fed sewer system like this one.”

The 865-ft section under I-94 went extremely well. Progress was made quickly and the entire bore was completed on schedule. Montgomery said, “We were very encouraged by the bore. We averaged 40 feet per day. We figured the much smaller second section would be a breeze.”

The second bore started well, as expected. The EJM crew launched the TBM from a well shored pit some 60 feet below the surface. The first 14 sections of pipe went in without incident, but then the TBM began to encounter some very large, unexpected, boulders. The machine continued on until the 112-ft mark where it came to a stop. The TBM was trapped.

How To Rescue A Trapped TBM

After the casing was in place, the EJM crew used the jacking cylinder to push the TBM into the casing where it was ultimately retrieved.

Montgomery heard about the pipe ram rescue technique from Mike Schwager, a Pipe Ramming Specialist from pipe rammer manufacturer TT Technologies, Aurora, IL. Schwager said, “The idea behind a ram rescue is simple. Drive a casing from the opposite side of bore that’s big enough to swallow the trapped TBM. It provides a economical solution to a potentially costly situation.”

Hoping to find a solution to his dilemma, Montgomery contacted Schwager. Schwager said, “After Mark explained the situation I knew it was going take a very large casing and a very large pipe rammer. We needed at least a 72-inch casing to allow enough room for the TBM.” Montgomery arranged for the casing and Schwager delivered the world’s largest pipe rammer, a Grundoram Taurus from TT Technologies.

>With a piston that weighs approximately 6,000 lbs., pounding out 180 strokes per minute, the 24-inch diameter Grundoram Taurus delivers more than 2,000 tons of dynamic thrust. Schwager said, “Driving a 72-inch steel casing is never easy, even with a tool like the Taurus. The hardware that connects the tool to the casing (ram cone) weighs 10,000 pounds alone. It’s very impressive.”

After a day or so of prep, ramming was set to begin. The steel casing was fitted with a 72-inch ram cone in order to reduce the operating diameter to 30-inches. The 24-inch diameter Taurus was fitted with a 30-inch inch ram cone. The tool and casing were then matched and connected. The EJM crew would attempt to ram in 5 sections of steel pipe for a total length of 77 feet.

Montgomery said, “One of my biggest concerns was being able to match the grade of the bore coming from the top down and meeting the TBM. We called in the engineering staff to reverse line and grade measurements. At the point where you begin ramming you certainly hope that the transfer of line and grade is accurate.”

Schwager said, “The actual ramming time was great, averaging between 15 and 20 minutes per 20-ft section. Set up between sections, however, took a little longer, but that’s to be expected when dealing with large diameter pipe.” Over 5 days, three 20-foot casings, one 10-foot and one 7-foot casing were rammed in, just a few feet short of the trapped TBM.

Dewatering was a major chore from the start of the job. Water was continually flowing from the sand. Schwager said, “After the ram was finished, there was so much water pouring into the casing that the crew decided to try and stabilize the soil plug with straw and cribbing and wrap things up for the weekend.”

Montgomery said, “There is really no way to estimate the amount of dewatering we did on this job. Dewatering was a continuous effort, 24 hours a day throughout the duration of the job.”

After the weekend, the remaining sand was removed from the 72-inch pipe all the way to the leading edge of the cutting shoe using an auger bore system. Well points were arranged around the perimeter of the opening between the TBM and the casing. Everything was allowed to dewater overnight before the actual rescue attempt would be made. 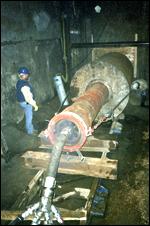 In order to rescue the trapped TBM, the Taurus rammed 77 feet of 72-inch casing in. Ramming times were very good, averaging 15 to 20 minutes per 20-foot section.

Early the next morning, the EJM crew powered up the TBM. Using only the jacking cylinders, the crew was able move the TBM forward. Slowly the TBM inched closer to the casing and closer to safety. Sections of concrete pipe were added to push the TBM into the casing. Eventually, to everyone’s relief, the TBM pushed its way into the pipe. More concrete pipe sections were jacked in place until the TBM moved far enough into the casing to be safely removed.

After the TBM was retrieved from the casing, the EJM crew placed the final two sections of concrete pipe in the casing. Montgomery said, “I was certainly happy when I saw the TBM make its way into the casing. Ultimately I would have preferred not having to use the pipe ram rescue in the first place, but this technique helped lessen the blow of a very spendy situation.”