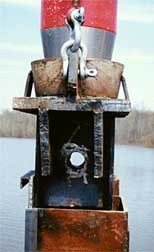 Last spring, BRS, Inc. of Richfield, NC, was contracted by Rowan County, NC, to install a water line connecting a new baseball field, used by a Philadelphia Phillies farm team, to the city of Kannapolis’ water supply. This required the installation of 3000 ft of 8-in. water main. Most of the job would be on land, but 320 ft of main needed to span a lake.

To cross the lake, the main needed to be installed next to a bridge which links the town to the field. Seven pairs of H-beams were to be installed to support the main. Traditionally, this would be accomplished by using a pie driver. The problem was that the pile driver setup required a crane, which was too heavy to be used on this bridge. Although a crane could reach from the water’s edge, it was deemed too cumbersome to maneuver.

BRS was familiar with trenchless pipe ramming tools, having used them to install pipe beneath roadways. Bradford Berringer, president of BRS, first became familiar with vertical ramming tool applications from trade magazine articles, sales literature, and video. Commenting on the possibility of using the ramming tool for the vertical installations, he stated, “We had no doubts that it would work.”

Berringer contacted Eddie Ward, TT Technologies’ Southeastern sales manager to secure some tool recommendations for his specific beam installations. “We’ve done it in the past! declared Ward. TT Technologies is a manufacturer of trenchless tools and accessories based in Aurora, Illinois.

Assisting Ward in the equipment selection was Bill Holyfield from A.E. Finley, a regional distributor of TT tools and accessories. They decided that a Grundoram Gigant hammer would be the most appropriate tool to use for driving the beams. It offered the necessary power, was light enough to be positioned by a boom truck on the bridge, and wouldnÕt require any modifications.

Berringer agreed with the selection. He then ordered a tapered locking ram cone which corresponded to the tool’s diameter, with the intention of devising an adapter to fit the ramming tool to the H-beams. This adapter needed to firmly hold the tool nose as well as fasten securely to the top of the H-beam.

Arrangements were made to BRS to rent a Gigant tool from A.E. Finley. Ductile iron pipe was ordered and support equipment was arranged with an installation timeline tentatively established.

The lake crossing commenced when a boom truck was positioned in just one lane of the narrow bridge, allowing regulated traffic to flow by it. The truck was easily repositioned from one point to the next, allowing the boom to swing the tool from one beam to another. A special beam holder extended from the side of the bridge and was used to uniformly hold the pair of beams in place for proper installation.

A BRS crew member made his way out onto the arm of the holder to coordinate the alignment of the ramming tool to the beam. The adapter was positioned on the beam, with the tool lowered into the saddle by the boom operator. By design, the assembly was held together by inserting a lock plate.

Once the tool was started, each beam installation was completed in approximately two minutes. Specifications dictated that each beam should be driven at least 10 ft deep, or to refusal. Crossmembers were then installed on each pair to cradle the 8-in. ductile iron water main.

“The job was let one day, we were awarded the contract the next, and were on the job two days after that. I’ve never been involved in a job that went from bid to work so quickly,” said Berringer. The project was rushed to facilitate the opening of the Piedmont Phillies’ season at the brand new ball park. BRS was given only 30 days to complete the entire job, including the land installations as well as the river crossing.

“We beat the deadline by 10 days,” declared Berringer. The work originally was to be completed before the second game of the season, but is was done before the first game.

BRS was able to install all 14 H-beams in just one day by using the pneumatic ramming tool. Berringer claimed that the rammer configuration was so much lighter and easier to use, it dramatically reduced tool setup time. He estimated his time savings at an incredible 90 percent, compared to using a crane. By factoring in the substantial time savings, Berringer knew that no other contractor could come close to matching his winning bid.

And when a struggling pitcher was removed from the mound that first game and sent to the showers, at least he had plenty of water.