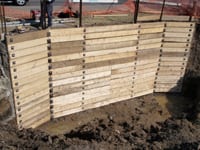 The city of Edmonton, Alberta, Canada has expanded it trenchless repertoire to include pneumatic pipe ramming. With numerous infrastructure projects in the works, the city is continually evaluating efficient tools, techniques and methods that can be employed by its sizable in-house construction program. Pipe ramming was an ideal choice for several storm sewer culvert installation projects including the recent installation of an 84-inch diameter casing under Whitemud Drive.

According to Ray Davies, City of Edmonton general supervisor of open-cut construction, several options were evaluated for the Whitemud Drive project. He said, “The objective of the project was to upgrade the capacity of the culvert to reduce potential flooding. The original concept, to construct a bridge, was very costly. Installing an additional culvert became the preferred option. Several trenchless installation methods were rejected due to shallow cover, so ultimately pipe ramming was selected to install the casing next to the existing creek flow casing.”

According to Davies, the city performs a large amount of tunneling work to help with storm water conveyance as well as storage. It is just one of the many components of a comprehensive in-house program. He said, “The tunneling group started in the 1960s and is very well known for its tunneling. That has always been done in-house. There has always been an open-cut group as well. Most of our work is rehab, spot repair work and then responding to emergencies. We also do the water and sewer service installations on city properties. It’s my understanding that we are kind of unique in the sense that we have such an extremely large work force dedicated to in-house construction.”

Flooding has been an issue in the city of Edmonton in the past. Major rain events in 2004 caused significant flooding and prompted the city to enact a 10-year storm water mitigation program that includes updating undersized storm water culverts.

The existing small metal culvert under Whitemud Drive diverts a small creek under the four-lane highway. According to Davies, the culvert, however, was undersized and prone to flooding. In order to add the capacity needed, the city decided to install a second culvert next to the existing to handle excess runoff during times of flooding.

Davies became acquainted with the pipe ramming method through associations with various trenchless organizations, including the NASTT. The Whitemud Drive pipe ram was the city’s second pipe ramming project and, according to Davies, it won’t be their last. He said, “We like the process very much and plan to do a lot more of it. In fact we purchased the hammer. The first project was a 54-inch diameter storm sewer casing rammed 100 feet.” 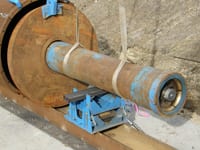 During the pipe ramming process, a pneumatic hammer is attached to the rear of the casing or pipe. The ramming tool, which consists of a piston within a casing, drives the pipe or casing through the ground with repeated percussive blows. A cutting shoe is often welded to the front of the lead casing to help reduce friction and cut through the soil. Bentonite or polymer lubrication can also be used to help reduce friction during ramming operations. Ramming tools, in general, are capable of installing 4- through 147-inch diameter pipe and steel casings.

Ramming can be used for horizontal, vertical and even angled applications. It is often used under roads, like the Whitemud Drive project, and rail lines because it displaces the soil without creating voids or slumps.

According to TT Technologies pipe ramming specialist Rick Melvin that is a key benefit of pipe ramming. He said, “Some installation methods can jeopardize the integrity of roads or rail lines because they remove soil from underneath to allow for the new pipe installation. Pipe ramming’s ability to install various sized casings without putting the topside structures in danger makes it a very attractive option. Also, pipe ramming works in difficult soil conditions. Boulders and rocks, as large as the casing itself, can be swallowed up as the casing moves through the soil and can be removed after the installation is complete.”

An entire length of pipe can be installed at once or, for longer runs, one section at a time can be installed. In that case, the ramming tool is removed after each section is in place and a new section is welded on to the end of the newly installed section. The ramming tool is connected to the new section and ramming continues. Several methods can be used to remove spoil from the casing including compressed air, water, an auguring system or other types of earthmoving equipment.

Before the job could begin, several environmental issues needed to be addressed. Davies said, “We had lined everything up and then we had our first delay, beavers. We needed to remove the den and the beavers in order to proceed. After completing that task, we needed to remove a tree section in order to make room for the installation. We had all the environmental studies done. And the last thing you do before you remove the trees is a nest check to make sure you’re not disturbing any wildlife. Well, the biologist found a nest of a northern flying squirrel, which is a protected species. So, despite being ready to go, I called Rick Melvin at the last minute and said, ‘We are on hold until this squirrel vacates the premises.'”

Periodic checks were made by the biologist and eventually the all clear was given and the Edmonton crews could safely clear the area and begin pit construction. 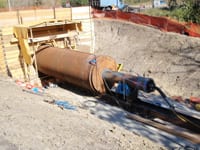 Pit construction for the Whitemud Drive ramming project was well planned and executed. According to Davies, the objective was to maximize the ramming effort, while ensuring the integrity of the road. He said, “We had room that we could do side slopes, but we wanted to get as close to the roadway as we could and ram as long of sections of pipe as possible because we were limited with a golf course to the south. So we installed soldier piles and built a beam and timber wall right up against Whitemud Drive, so we could get as close as possible and make sure there would be no subsidence by the road. Then we poured a 10-foot by 50-foot concrete pad, six inches thick with rebar. On top of that we put 1-inch thick steel plates and on top of that we put the H-beam and that’s what the pipe rode on.”

City of Edmonton crews moved the first section of 40-foot pipe into place. Once the casing was placed in position, crews fabricated and attached a cutting shoe on the lead edge of the pipe. The connection was then made between the 84-inch casing and the 24-inch pipe rammer. Melvin explained, “The connection between the tool and the casing is made through a tapered ram cone and 84-inch cotter segments. This configuration ensures that the maximum driving force is transferred to the pipe. In the past, ramming a casing of this diameter would have required a fabricated ramming adapter, but as the demand for larger and large diameter ramming equipment has increased, we [TT Technologies] now offer standard ramming gear for casing diameters as large as 96 inches. This saves time and money.”

Once the rammer was attached and the bentonite system connected, ramming was underway. The first 40-foot segment was installed in approximately one hour. The ramming tool was disconnected from the casing and the next 40-foot section of casing was moved into position. Welding the two casing sections together took 18 hours. The rammer was the attached to the end of the second casing. Ramming time for the second section took an hour and 45 minutes. The process was then repeated with another 40-foot section of casing and finally a 20-foot section until the entire 140-foot length was installed. Crews cleaned out the soil during the welding process with a small skid-steer. 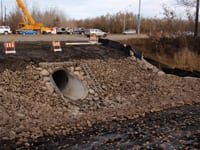 Before the casing could be put into service, several additional environmental concerns and regulations needed to be addressed. An environmental consultant was brought in to make sure that all the concerns were

addressed properly and accurately. Davies said, “There are a lot of environmental controls that need to be adhered to. Even though it is a small body of water, it’s still a body of water and we have to make sure we’re not disturbing the fish or adding too much sediment. We have an environmental consultant that took control of that for us. There are various federal and provincial regulations that we need to follow when working near a body of water. The consultant made sure all the permitting was done properly and checked in throughout the project to make sure all the regulations where being followed.”

With the casing in place, crews cleaned out the inside completely and coated it with environmentally-friendly, rubber-based product. Small baffles were also welded to the bottom of the casing and gravel was added. According to Davies the objective was to make the casing as natural as a waterway as possible. An extensive amount of riprap was placed around the ends of the casing as well to help protect against erosion during times of high flow.

With the success of the Whitemud Dive project, Davies said the city has plans for additional pipe ramming projects in the immediate future.