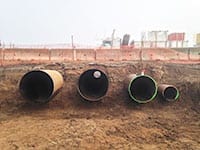 In the world of oil production, Canada is a major player. Sitting on one of the richest deposits of oil laden oil sands and with new techniques to extract oil from those formations, oil production facilities are being developed throughout the oil sands region of the country. One of the largest facilities under development is Surmont Phase 2, a joint venture between ConocoPhillips and Total E&P Canada. ConocoPhillips is the operator of the project and Bantrel Management Services is the construction manager.

A total of five casing installations were completed for the Surmont project, a 36-inch culvert for drainage and a series of casing sleeves, including two 52-inch casings, one 42-inch casing and one 24-inch casing, side-by-side under the highway.

In all, Surmont, located just south of Fort McMurray, Alberta, represents one of the largest SAGD or Steam Assisted Gravity Drain production facilities in the world. SAGD is a method developed to extract the oil rich oil sands from the ground. In over-simplified terms, a SAGD system consists of two horizontal wells. The method utilizes steam, injected through one of the wells in order to heat deep, heavy oil and make it fluid. The fluid oil is then captured and brought to the surface through the other well.

As part of current construction, infrastructure is being installed for the next phase of the facility. Neptune Coring, a leading trenchless contractor based in Edmonton, Alberta, has an important role in the Surmont project. Working as a trenchless subcontractor for Voice Construction, Edmonton, Alberta, Neptune recently completed a difficult trenchless project, installing casings for carrier lines and drainage culverts under Highway 881.

With limited cover under the road Neptune Coring General Manager Ben Campbell needed to develop a solution that would not impact the highway, yet allow for the installation of several large casings for one side to the other.

The innovative solution combined two trenchless methods. Campbell said, “We determined that the way to get the accuracy we wanted, was to use a combination of two trenchless techniques, guided boring, or pilot tube, and pipe ramming. The pilot tube is extremely accurate, within an inch. Once in place, we could follow the path created by the pilot tube through a series of pipe rams. The result was extremely precise. And that’s what we needed here.” 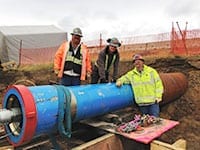 Ramming tools, in general, are capable of installing 4- through 144-inch diameter pipe and steel casings. At 24 inches in diameter, the Grundoram Taurus, which Neptune Coring used, is one of the world’s largest pipe rammers.

During the pipe ramming process, a pneumatic hammer is attached to the rear of the casing or pipe. The ramming tool drives the pipe or casing through the ground with repeated percussive blows. A cutting shoe is often welded to the front of the lead casing to help reduce friction and cut through the soil. Bentonite or polymer lubrication can also be used to help reduce friction during ramming operations. Ramming tools, in general, are capable of installing 4- through 147-inch diameter pipe and steel casings.

Ramming can be used for horizontal, vertical and even angled applications. It is often used under roads, like the Surmount project, and rail lines because it displaces the soil without creating voids or slumps.

According to TT Technologies pipe ramming specialist Rick Melvin that is a key benefit of pipe ramming. He said, “Some installation methods can jeopardize the integrity of roads or rail lines because they remove soil from underneath to allow for the new pipe installation. Pipe ramming’s ability to install various sized casings without putting the topside structures in danger makes it a very attractive option, as was the case with Neptune on the rams at Surmont. Pipe ramming works in difficult soil conditions. Boulders and rocks, as large as the casing itself, can be swallowed up as the casing moves through the soil and can be removed after the installation is complete.” 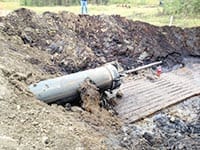 Campbell said, “This is why we decided on ramming because we didn’t have to worry about controlling the face of the excavation. You’re effectively swallowing that material up and only displacing the wall thickness of the casing. There’s no subsidence. And that was the objective, we didn’t want to impact the highway.”

During pipe ramming operations, an entire length of pipe can be installed at once or, for longer runs, one section at a time can be installed. In that case, the ramming tool is removed after each section is in place and a new section is welded on to the end of the newly installed section. The ramming tool is connected to the new section and ramming continues. Several methods can be used to remove spoil from the casing including compressed air, water, an auguring system or other types of earthmoving equipment.

Guided boring is commonly referred to as a pilot tube method. The method is versatile and can be paired with other trenchless technologies. Campbell explained, “The major components of this methodology are a line and grade control system and a hydraulic jacking frame. The line and grade control system, essentially guidance, uses a camera mounted theodolite and a pilot tube target that use LED’s which is then displayed to a monitor. The jacking frame generates pushing force and rotational torque to push and steer the pilot tube segments complete with a steering head through the ground. The pilot tube segments have an inner diameter large enough to view the illuminated target. Once installed, your tolerances are really within about 25mm or 1 inch.”

At that point the new pipe or casing usually pushed into place with the jacking cylinder, following the line established by the pilot tube. For this project, pipe ramming was used to install the various casings. 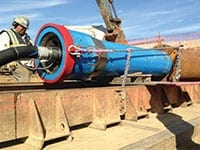 Neptune Coring used a combination of two trenchless techniques, guided boring, or pilot tube, and pipe ramming. The pilot tube is extremely accurate and once in place, the pipe ramming follows the path created by the pilot tube.

Neptune crews spent three 21-day shifts to complete project. Campbell said, “We basically went up there and pushed all the pilot tubes for all the installations in first with our guided boring machine. Then we started with the deepest section and worked our way up to the shallowest. The soil under the road was a hard clay material. We did run into some organics and one obstruction, a 24-inch diameter rock that we had to hydro-vac and remove from one bore path.

“The GBM requires displaceable soil conditions to operate. You need to be able to push that pilot tube through the ground unlike a directional drill for example. So, as part of the risk assessment, Voice Construction had a ground penetrating radar contractor come out and do an entire survey of the soil below the road to identify any potential obstacles or anomalies. And we identified several potential areas and took the necessary precautions. And thankfully we only ran into that one obstruction that was easily taken care of.”

For the ramming, Neptune crews used a 24-inch diameter rammer, the track from 60-inch auger boring machine as a platform for ramming along with casing saddles and an air cradle from TT Technologies to support the pipe rammer. Two 1600 CFM air compressors were used to power the ramming tool. Casings were rammed in 40-foot sections. The welding requirements were quite stringent. All of the welds needed to be x-rayed. The casings were treated like process piping, even though they were only sleeves.

Final casings were approximately 200 feet in length total, but according to Campbell the 36-inch culvert was installed at a bore distance of 150 feet long, 44 meters. The other four casings for the process pipes were installed at a bore distance of approximately 120 feet. A concrete apron was poured over the portion of the casing sleeves for process pipes that extended out on either side of the highway. Once installed, Neptune crews cleaned spoil from the casings using an auger boring machine.

Campbell said, “The project was a great success. But it wouldn’t have been possible without a high level of collaboration between all the partners, ConocoPhillips, Bantrel, and Voice Construction. There is such a solid working relationship between everyone and that’s what makes projects like these possible.”

Melvin said, “The Neptune crews are highly skilled and great to work with. When you can incorporate multiple trenchless disciplines into a single project, you know you’re dealing with a highly competent group of people and that’s Neptune Coring.”