Brunei is a significant player in the world oil scene. Published reports have it producing in the neighborhood of 180,000 barrels of crude oil per day. Revenues from the sale of oil and natural gas account of over a third of the country’s Gross Domestic Product (GDP). Brunei ’s location, close to the shipping lanes of the South China Sea, adds to it strategic importance in the world energy market. The driving force behind Brunei’s oil industry is Brunei Shell Petroleum (BSP). While other oil producers have been allowed in the country, BSP is still the largest and most active.

Oil production in Brunei peaked in the late 1970s at approximately 240,000 bbl/d, it has since been cut back in order to extend the life of the oil fields. In an effort to further Brunei’s oil producing capabilities, BSP is exploring other regions of the country for oil, specifically underwater. The Champion oil field is Brunei’s best producing offshore oil field. The new Champion West oil field is said by experts at BSP to be one of the largest, untapped oil and natural gas resources in Brunei. It’is estimated that the Champion West field will be Brunei’s mainstay, producing oil and natural gas, for the next 20 years and beyond.

As part of Champion West development, a new drilling platform, CWDP-1, was constructed at the S-42 construction yard on the Belait River. The platform topsides, which weigh 1000 tonnes needed to be skidded onto a barge in the adjacent river for load-out. However, structural engineering calculations indicated that the ground and sheet piling at the riverside were not strong enough to support the foundation load from the skid beams during load-out.

BSP developed a plan for the strengthening of the skid beams by supporting them with piles. The design required the contractor to drill six through-holes at each of the 1.5 m wide skid beams for installing 50mm tie rods. After installing the twelve tie rods and grouting into the holes for the two beams, piling work was ready to begin. To make the situation more difficult, the head room between the bottom of the platform and the ground was only 8 meters.

In order to strengthen the piling, four 609mm diameter pipes needed to be installed vertically to a depth of 31.5m. Also it was important to avoid any disturbance or change in physical property of the skid beam and the existing sheet piles. After much consideration, BSP decided to use pipe ramming equipment from the TT Group to install the pipes. According to pipe ramming specialist, Mike Schwager, TT Technologies, Aurora, Ill. USA, the rammers chosen for the project were well suited for this type of work. He said, “For the Brunei project BSP was dealing with a limited amount of head space to drive into the ground vertically. They chose to use a mini-ramming machine at the start and finished with a larger ramming tool.”

A 270mm diameter Grundoram Mini-Gigant and a 460mm diameter Grundoram Goliath were chosen for the project. With the assistance from a TT Group engineer from the United Kingdom, contractor Yura Oil Tools SDN BHD together with Trenchless Technology (FE) PTE LTD and Ban Tiong Soon Contractors PTE LTD, were able to get the project moving and start ramming operations.

According to Schwager, several options are available for ramming various lengths of pipe. He said, “An entire length of pipe can be installed at once or, for longer runs, one section at a time can be installed. In that case the ramming tool is removed after each section is in place and a new section is welded on to the end of the newly installed section. The ramming tool is connected to the new section and ramming continues. Depending on the size of the installation, spoil from inside the casing can be removed with compressed air, water, an auguring system or other types of earthmoving equipment.”

Ramming tools, in general, are capable of installing 101mm through 3,100mm diameter pipe and steel casings. Ramming requires minimal working depths and is proven effective for horizontal, vertical, and angled applications. Ramming is also ideal for installations under roads and rail lines because it displaces the soil without creating voids or slumps. 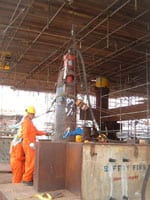 Because of limited head room and working space, crews utilized a Mini-Gigant pipe rammer to vertically ram pipe piles. At 1230mm in length, the mini pipe rammer is substantially smaller than standard size rammers, but still offers plenty of power at 2000 Nm of impact energy

In order to install the four 609mm diameter, 25mm wall steel pipe piles and still operated within the limited headroom, a Mini-Gigant was used to push in first 5 m section of pipe. The Mini-Gigant, while only 1230mm in length, still delivers 2,000 Nm of impact energy at 430 strokes per minute. Once the pipe was 5m in the ground, leaving 500mm exposed, a 2m section casing was welded together.

Crews then used the larger, more powerful Goliath to drive the piles deeper. After positioning the rammer on top of the casing, the ramming process continued. The casing was installed without incident. In total, it took 5 hours to install one casing of 31.5m in 2m per section. Everyone involved with the project was very pleased with the outcome.

Ultimately BSP’’s plan worked and the drill platform, CWDP-1, was successfully out-loaded. A recent press release from Shell Petroleum confirms the success of the Champion West drilling platform. In the release Dr Grahaeme Henderson, Managing Director of BSP, said, “This is an excellent achievement, as first oil was planned for February 2006. We are two months ahead of schedule and have delivered first oil without compromising our safety and environmental performance.”

Dr Henderson continued, “”I am pleased to announce that this well from Champion West has delivered a record flow rate for BSP. The reservoir is one of the largest undeveloped resources in Brunei, and will deliver new material oil and gas production for the next 20 years and beyond for the BSP shareholders of the Government of Brunei Darussalam and Shell.”

Early signs have confirmed that this well is a record production well for BSP flowing oil at an initial rate of 16,700 b/d (2,650 m3/d). Champion West is also producing gas and by 2010, almost a quarter of BSP’’s gas production will come from this field.

Dr Henderson said, “We are particularly proud that this platform, comprising the subsurface jacket, together with the topside deck and facilities, was designed and constructed in Brune , in BSP’s fabrication yard in Kuala Belait. This reinforces BSP’s commitment to develop Bruneian contractors and benefit the local community”.

The platform is also one of the world’s most technically advanced offshore facilities and uses downhole pressure and temperature sensors pre-installed in a fiber-optic cable, five kilometers in length.

Remote controls, using high bandwidth connections to the shoreline, are also a feature allowing engineers in BSP’s Head Office to continuously monitor the performance of the offshore wells and facilities improving both production and reserves recovery.

Compact Drill Rig Maintenance: Back to the Basics