After the second product pipe became immobilized during pullback, the Laney crew used a pneumatic Grundoram Taurus pipe rammer to help free the stuck bores and assist with pullback.

Laney Directional Drilling, Inc., Humble, TX has been involved in some if the most celebrated directional drilling projects in the industry. That reputation was enhanced with their recent role in the Gulfstream Pipeline project. Working to meet an aggressive timeline, the Laney crews were put to the test when they encountered extremely difficult directional drilling conditions during the installation of two major sections of the pipeline off the coast of Alabama.

To solve the problems that threatened the completion of the project, Laney Operations Manager Robert D. Hamil called on years of experience and drilling knowledge. The solution to combine the power of their self-manufactured LDD Series directional drill rigs with the percussive action world’s largest pipe rammer, the Grundoram Taurus from TT Technologies, Aurora, IL, provided amazing results.

According to published figures, the Florida Public Service Commission estimates that the State will see a 25% growth in demand for energy over the next five years. Part of the answer to meet this demand is natural gas. Being surrounded on three sides by water makes Florida difficult to access by land.

The Gulfstream pipeline project is aimed at alleviating Florida’s projected energy crunch. The 753-mile pipeline begins near Mobile, AL and reaches Florida in Manatee County, traveling a majority of the way under the Gulf of Mexico. It is one of the most ambitious pipeline construction projects to originate in the United States in years and is Florida’s first new natural gas pipelines in 40 years.

Laney Directional Drilling, Inc. was sub-contracted by Stolt Offshore, Inc., Middlesex, UK for several directional bores in various locations along the pipeline route. Some of the most difficult bores took place where the pipeline transitioned from offshore to onshore, under a shipping channel in the Gulf of Mexico off the coast of Bayou LaBatre, AL.

The Bayou LaBatre section called for the completion of two 4,700-ft parallel bores for the final phase of the Gulfstream project. The 36-inch diameter epoxy coated steel product pipe has a 1.25-inch wall thickness. The pipes needed to travel under a shipping channel in the Gulf to a location onshore. One line would serve as the main line, the other as the supply line. For the massive project, two LDD drill rigs with close to one million pounds of pullback each were used.

The Laney crew set up on shore to drill the pilot bore out to the pre-determined spot in the Gulf for the installation of the first pipe, the main line. The second bore would install the supply line. Over the course of several weeks the Laney crew set up, performed the necessary survey work, and completed the pilot bore and a series of backreams in preparation for pulling back the mammoth pipe.

Hamil said, “After we completed the almost 9-inch diameter pilot bore we started backreaming. We utilized a 24-inch backreamer, then a 36-inch, 48-inch and finally a 64-inch reamer which we pulled through twice. Usually backreaming 12 inches larger than the product pipe is standard, but with the product pipe weighing 464 pounds per foot, we knew this was going to be a difficult pullback. So, we went above and beyond, up to 28 inches. Then we pulled 48-inch diameter swabs through the hole to make sure that everything was ready for pullback.”

These were the challenges the Laney crew faced as they began pulling back the 4,700 feet of 36-inch diameter steel pipe. The pipe lay underwater and was hoisted to the surface to be connected for pullback and then lowered back down. Pullback started slowly, but continued until approximately a third of the way through. The Laney drill rig began to reach the upper end of its pulling capabilities while the installation was slowing to a stand still. The decision was made to stop the pullback and try and recover the pipe.

Hamil said, “At that point we figured that we would still be able to remove the pipe and start again. Stolt had a large 300-ton cross winch that they anchored offshore. They attached 3-inch diameter cable to the back of the pipe. The winch was able to remove the pipe, but we knew that there would eventually come a point of no return.”

The crew reached that point during the second attempt when the pullback was halted near the 4,000-ft installed mark. It was decision time. Hamil said, “At that point, critical path schedules were coming into the picture. After meeting with Gulfstream officials, it was concluded that the supply line was more important to keeping the project on schedule than the main line. So, the decision was made to begin the next bore.”

While the Laney crew started moving equipment into position for the second bore, Laney Directional Drilling President, Mark Laney contacted TT Technologies Pipe Ramming Specialists Fred Burlbaw and Rick Melvin about getting a pneumatic pipe rammer on site to assist with the project.

Hamil said, “We were aware of the pipe ramming techniques designed to assist during drilling operations. We had seen it in action at a jobsite recently and had been contemplating adding a pneumatic pipe rammer to our equipment arsenal for some time. This project expedited our plans.”

Several pipe ramming techniques have been developed over the few years to assist directional drill rigs in difficult situations. The techniques have been used to successfully remove stuck drill stems, assist directional drill rigs during difficult pullbacks, free immobilized product pipes and even salvage failed bores by removing stuck pipe from the ground.

Melvin said, “By utilizing the percussive action of the Grundoram pipe rammer we can really help drilling operations. These techniques can help avert costly situations where product pipes or drill stems get stuck. We’re actually seeing drilling contractors bring pneumatic pipe rammers to job sites as a kind of insurance policy. It’s been very positive for the industry.”

The 36-inch steel product pipe was carefully lifted out of the Gulf of Mexico and fitted with a special adapter. The Grundoram was then fitted to the adapter to complete the assembly for pullback assist.

When the Taurus pipe rammer arrived at the site, the second pilot bore and series of backreams were complete and pullback was ready to begin. Burlbaw said, “We decided to ready the rammer to assist during the second pullback. That way we would be able, if needed, to assist with pullback immediately if problems occurred. Laney had fabricated a special ramming adapter to fit on the back of the product pipe so we were essentially ready to go.”

Pullback of the second pipe proceeded without incident until the Laney crew was within 800 feet of completion when pullback stopped again. In addition to facing the same conditions on this bore as the first, the crew had to contend with a 1,500-ft section of 3-inch cable that was being dragged behind the pipe. The cable was attached the pipe in case the pullback stalled. According to Hamil the cable acted like an anchor and dug into the sand adding more resistance.

The rammer was taken to the awaiting work-barge in the Gulf by another barge equipped with a large crane, the pipe adapter and large air compressors. Adding to an already difficult project were the tides. All work had to be done in conjunction with the right tide conditions. Melvin said, “We were working from barges in the Gulf, but the area that we were working was still fairly shallow, only 9 feet deep at a mile off shore and it was filled with sand bars. At low tide the boats and barges can’t navigate through that area. So everything we did was based on the timing and the tides.”

Once at the work-barge, a crane was used to lift then remove the 1,500-ft section of cable. The end of the product pipe was also carefully lifted with the crane and rested on the surface work-barge. The pipe was fitted with the specially fabricated adapter and the 24-inch diameter Grundoram Taurus put into position, completing the assembly.

Despite sitting for three weeks, everyone was optimistic about getting the first pipe all the way in the ground. The crews repositioned the drill rig and moved the barges out to the end of the first pipe string. Again the end of the pipe was carefully lifted out of the water and the Grundoram, pipe adapter and pipe were fitted together in the same way as before.

The crew started the drill rig and pulled back at approximately 50 percent. Then the hammer was started and the crew let it run for a few minutes. When they believed that the energy from the ramming had moved through the pipe string, more pulling force was applied and the pipe began to move.

Hamil said, “This pipe had been sitting for quite some time. We wanted to let the hammer work on it. We pulled through a couple sections of drill stem and let the rig pull on its own. We pulled a couple hundred more feet and the pipe started to become tight again. We reconnected the hammer, put some more energy down through it and we were back in motion again.”

This time there were no more stops. The Laney crew was able to complete the remaining few hundred feet and successfully install the pipe. Burlbaw said, “Everyone associated with the project was ecstatic. The Laney crew had been working pretty much 24 hours a day, seven days a week for three months. They all were excited to get the pipe in the ground.”

Hamil said, “Getting the pipes in the ground made everyone happy. I think everyone learned something on this project. Combining the rammer with the directional drill proved extremely effective. We won’t hesitate to use it again.” 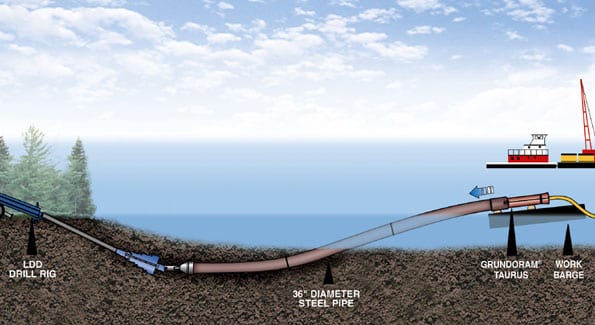 US Pipeline Right on Target with Trenchless Technology