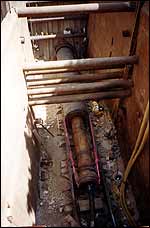 The Procision boring crew used a 24-inch diameter Grundoram Taurus and an 18-inch diameter Goliath to install several casings in this “telescopic” bore.

Procision Boring of Elk Grove, Ill. recently completed a difficult 36-inch steel casing installation in Channahon, Ill., just south of Joliet. The project was part of a large-scale sanitary sewer upgrade for the city of Channahon. The bore path traveled a lengthy 432 feet under two frontage roads, two on/off ramps and I-55 at its intersection with US HWY 6.

According to Pipe Ramming Specialist Mike Schwager of NUCA Member TT Technologies, the soil conditions in that area are extremely challenging. Schwager said, “The Joliet area is known as one of the most difficult areas to complete any type of boring work. The soils range from clay to gravel with boulders as larger as 24 inches, in some cases even larger.”

With several challenges ahead of them, Procision Boring co-owners Donny Schmit and Wally Koelle, along with Foreman Denny Hunziker, contemplated a telescopic bore and the possibility of pipe ramming the 432-foot, 36-inch steel casing.

Koelle said, “Because of the extreme soil conditions, we decided to attempt a telescopic bore. This involves ramming or augering a larger than specified casing to a predetermined distance. The spoil is then removed and the ramming of the actual casing takes place inside the larger one. For long runs like this one, the telescopic bore gives the you a head start in difficult conditions.”

Hunziker was able to auger bore a 42-inch casing 180 feet before running into trouble. Jacking pressure had risen to the maximum, but could no longer move the casing. The bore was slightly to the right of the intended line and slightly above the intended grade.

The Procision crew picked up a 24-inch diameter Grundoram Taurus from TT Technologies, and Schwager arrived the next day. After prep work, the crew rammed the casing another 60 feet to the halfway point. The spoil was cleaned out with the auger and the Procision crew began preparations for ramming the 36-inch casing.

At this point, steps were taken to help ensure an acceptable grade on the 36-inch ram. Schmit explained, “We decided to add an oversized cutting shoe to the front of the 36-inch pipe in an attempt to gain back the line and grade deviation. The oversized shoe would guide the pipe downward.”

The 24-inch Taurus was returned and an 18-inch Grundoram Goliath was brought in to finish the job. The Procision crew spent several days welding the 36-inch casing sections together and placing the pipe in the 220-foot long, 42-inch casing with the jacking cylinder. Once in place, ramming began.

As the bore went farther and farther, ramming times increased slightly. The 280- to 300-foot section took approximately 40 minutes to complete. Typical ramming times continued to range from 30 to 45 minutes for the remaining sections of pipe.

Schmit was impressed by the performance of the rammer. He said, “Cost control is always an issue. With the ramming, our costs came way down. The only alternative was to hand mine, but with hand mining you need more personnel and get less than 10 feet a day. Once prep work was completed, we could hammer in a piece in 30 to 40 minutes.”

Hunziker said, “It went well. We were in some pretty difficult ground. I was surprised on how easy the rammer went through this type of soil. I look forward to more ramming in the future.”