Plumbing contractors around the United States are finding that trench less technology can help them improve their service offerings while improving their bottom line. Roto-Rooter Services is a prime example. Roto-Rooter Service Company is the largest plumbing company is North America. The Engineering Services division was created in Atlanta in September of 2002 to provide trenchless replacement solutions to residential, commercial, industrial and municipal customers.

A recent project in Snellville, GA. highlights the extent and effort that Roto-Rooter has placed on expanding its repertoire from plumbing services to expert trench less contractor. Dave Glazer, Director of Engineering Services Atlanta, has been spearheading the trench less effort at Roto-Rooter. He said, “The project in Snellville required two trench less methods, horizontal boring and directional drilling. It shows how far we’ve [Roto-Rooter] come in the last few years. Now we have the ability to take on difficult projects and develop sensible, trench less solutions for them.”

A 2 1/2-inch Grundomat 65-P was used to make the short connections to each individual building. Shots with the piercing tool ranged between 50 and 60 feet.

Roto-Rooter was founded in 1935. Today the company boasts 540 offices nationwide offering residential and light commercial plumbing services. In 2002, the Engineering Services division was created to increase awareness and promote the use of trench less technology throughout the company. Since its inception, the group’s focus has been expanding the company’s core offerings to include pipeline replacement and rehabilitation services. Dave Glazer has been instrumental in that effort.

With over 32 years in the water and wastewater industry Glazer has worn many hats. He has worked on the municipal side and contractor side, as well as engineering and consultant side. He’s been involved in the construction of everything from tank washing systems to wastewater treatment facilities. Glazer is also no stranger to trench less technology. He has been working with various types of trench less equipment for over a decade, gaining his first exposure through manhole replacement techniques. This industry veteran was chosen to head up Roto-Rooter Atlanta’s Engineering Services division.

Glazer said, “We’re aiming to do some of the specialty trench less projects that other people just aren’t able to do. We’re not trying to compete with other contractors; we want to work with them. We want to be able to take the projects that need to be done, but other companies either can’t do or can’t afford to come in and do.”

Tools Of The Trade

The new 1-inch copper water services replaced aging 1-inch polybutylene pipes. Disruption was kept to a minimum through the use of trenchless technology.

One of the trench less tools Engineering Services utilizes is horizontal directional drilling. While the HDD market has seen a slowdown, directional drilling continues to be a viable and useful technology in many sectors. The water, gas and electric industries continue to utilize the technology for “last mile” installations and “street to the house” utility installations.

According to TT Technologies Product Specialist Eddie Ward, the development of smaller drills and the resurgence of piercing tool usage marks two important trends in the industry. He said, “With the lack of longer range, medium diameter drill work, the industry has moved toward shorter, smaller diameter installations, in tight working conditions. The technology in today’s smaller drills has increased their capability and made them easier to use. This fact alone allows entities like Roto-Rooter and other groups to utilize this type of technology.

“On the piercing tool side, I believe the rediscovery so to speak is driven be cost and efficiency. Contractors are remembering or realizing that these tools represent tremendous value. They are extremely versatile and capable, as well as affordable.”

Capability is also a factor with the new compact directional drills. With some “mini” drills offering as much as 9,200 lbs. of thrust and pullback, the machines are able to accomplish a wide range of installation tasks. According to Ward the drill offers operational efficiency in terms of its vice cycling system as well. He said, “A computerized Smart Vice system simplifies the drilling process by automating the drill’s vice cycling operations. The operator has single push button control of the function. That helps improve efficiency and speeds up drill times. The vice is also self-centering, reducing wear and tear. The operator can return to manual control with a flip of a switch.”

Ward continued, “These compact drills work well in residential areas which makes them attractive to companies that have that residential focus. They can be transported on a trailer pulled by a pick up truck and require minimal crews to operate. The 4X’s special steel track with bonded rubber pads offers excellent traction and durability while minimizing potential damage to concrete and turf which is important in residential settings.”

The Snellville project necessitated the replacement of over 1,200 feet of 1-inch blue polybutylene water services with 1-inch copper. According to Glazer the facility had been experiencing trouble for quite sometime. He said, “The work was being done at a medical center. Because it’s a facility that treats patients, it cannot be without water at anytime. The blue polybutylene lines had suffered several breaks and leaks recently. With repair costs quickly adding up, the property management group finally decided to have the lines replaced.”

The entire project was done under a parking lot. Three services to three separate buildings needed to be installed. Each service was divided into two sections, a long section and a short section. Each long section ran from the water meter to a designated point in the parking lot where a pit was dug. The corresponding short section elbowed 90 degrees at that point and ran to the specific building.

Glazer said the project offered some extensive challenges. He said, “We had several utilities to contend with. We had a major fire line that basically ran down the middle of the project. We also had storm drains to contend with underneath, as well as some electrical conduit from the light poles in the parking lot. We made certain to map things out very carefully. And the whole project came off without a hitch. That doesn’t happen every time, but it did here.”

The long sections ranged from 75 feet to 250 feet and ran down the center of the parking lot. Glazer chose to directional drill those sections. However, instead of drilling out and pulling back each pipe segment individually, the crew was able to utilize a single bore that traveled through each pit. During pullback a new section of copper pipe was added when the drill reached each consecutive pit. With the three pipes in place, Glazer’s crew set to the task of boring to the buildings.

The short sections ranged from 50 to 60 feet and ran perpendicular to the lines that were installed by the Grundodrill. Glazer chose to install the short sections using the piercing tool. Crews used a 2 1/2-inch Grundomat 65-P to bore from the consecutive pits in the center of the parking to the corresponding building.

The project took approximately one week to complete. All of the boring work was completed in a single day. The existing blue poly lines were abandoned and the new copper put in service. Glazer anticipates more trench less work in the future and the continued growth of Engineering Services. 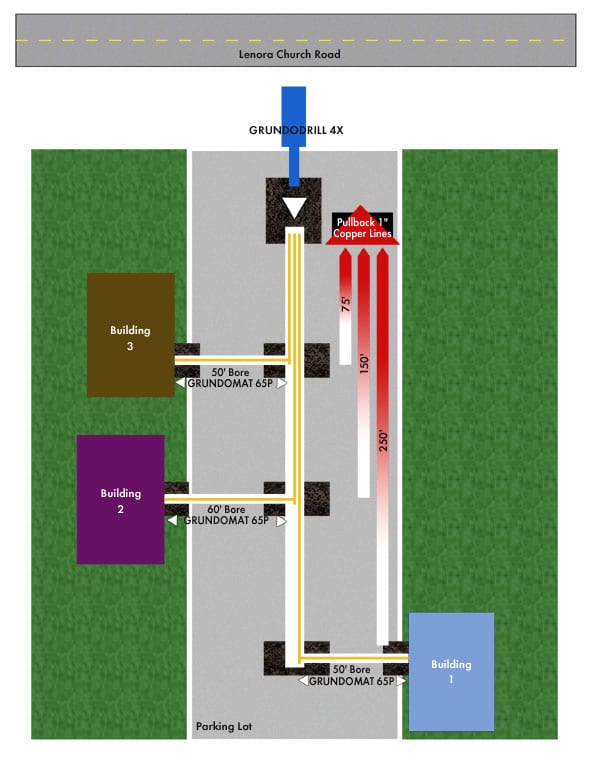 The Roto-Rooter crews were able to utilize a single bore with the 4x to install all three services. The bore ran went through each pit. During pullback the crew added the next section of pipe when pullback reached each consecutive pit. The connections to the buildings were then made with a piercing tool.