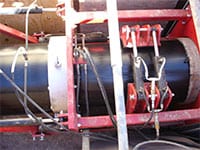 The Swagelining™ technique has been around for over 30 years. Developed in the late 1970s by British Gas and United Utilities in order to address the problem of failing pipeline systems, the technique showed great promise in the North American market early on. As utilization has continued throughout the world, AJM Pipelines (Jacksonville, Fla.) President Andy Mayer is re-energizing the technology in North America.

He said, “Swagelining Limited, a Scottish based company, oversees the technology on a worldwide stage. In 2010, AJM Pipelines was granted the sole rights to utilize the technology in America. The company is the alliance partner for Swagelining for all water, wastewater, gas, mining and water injection pipeline applications.”

During the Swagelining process, the PE pipe is pulled through a reduction die to temporarily reduce its diameter. This allows the pipe to be pulled through the original pipeline.

“After a period of dormancy in the US, pipeline rehabilitation by means of Swagelining™ appears to be poised for a resurgence. This unique rehabilitation technology has been used globally in a wide range of applications transporting products such as potable water, sewage, brine, gas, hydrocarbons and mining slurries since its introduction almost 30 years ago after development by British Gas. The polyethylene lining technique can be used for rehabilitation of ageing pipes in order to extend life of the asset, or new pipelines onshore and subsea as alternatives to a corrosion allowance or use of a CRA pipe material.”

TT Technologies product specialist Frank Fresneda said utilizing the Grundoburst hydraulic unit for a Swagelining application is a solid choice. He said, “While the Grundoburst is primarily thought of as a static bursting system, really it is a pulling device; and a good one at that. It’s not a great leap to go from pulling a static pipe bursting head and HDPE product pipe to pulling a Swageline configuration. Plus, the Quicklock style bursting rods are a benefit to both applications.”

AJM Pipelines is the alliance partner to construct Swagelining™ projects in North America. Working with Swagelining Limited, who oversees the technology on a global scale – the partnership brings a pro-active agenda to meeting client pipeline needs. Their mission is to ensure Swagelining™ technology extends the service life of new and existing pipeline systems. The partnership focuses on liner system design which includes polymer material specification, insertion technology of Swagelining, venting systems and specialized connectors which is developed for each project and application.

Using bespoke software developed from the results of extensive physical testing during Swagelining™ trials over several years and 1,000 miles of global projects, polymer liners are designed to be tight fitting in the host pipe without the need for forced expansion (reversion) after insertion.

The city of Amarillo needed to rehabilitate 2,100 feet of existing 30-inch cast iron water transmission main originally installed in 1927. While the host pipe was in sound condition, several leaks have occurred at the lead joints on the pipeline causing significant cost and disruption to repair, as well as inconvenience to residents and businesses. The pipeline was located in tight easement, under homes and beneath busy roads. In addition, the system could only be shut down for a limited period of time. During dry weather conditions, flow capacity needed to be maintained because the pipeline is a critical artery of the system that feeds another major area in town.

AJM Pipelines is the alliance partner to construct Swagelining™ projects in North America. The Swagelining TM technique has been around for over 30 years.

The Swagelining system uses PE pipe which has an outside diameter (OD) slightly larger than the inside diameter (ID) of the host pipe. After sections of PE pipe are butt-fused together to form a continuous pipe slightly longer than the pipe to be renewed, the PE pipe is pulled through a reduction die to temporarily reduce its diameter. This allows the pipe to be pulled through the original pipeline. After the pipe has been pulled completely through the host pipe, the pulling load is removed. This allows the PE pipe to return towards its original diameter until it presses tightly against the inside wall of the host pipe. The tight-fitting PE liner results in a flow capacity close to the original pipeline design.

Fresneda said, “Some of the same things that make the Grundoburst an extremely effective static bursting machine also contribute to its effectiveness in the Swagelining technique. Quicklock bursting rods, for example, make the connection between the hydraulic pulling unit and the new product pipe. The rods are linked together not screwed together like traditional drill stems or other static systems. This speeds the installation process as well as the breakdown procedure. The rods keep constant tension on the product pipe and are quickly removed one at a time at the exit pit as Swagelining is in operation. It worked very well for this application.

“Also, there are several models available with different pulling force capabilities. For this project a 1250G was used. The unit offers over 285,000 pounds of pulling force. That was more than enough for the Amarillo project.” 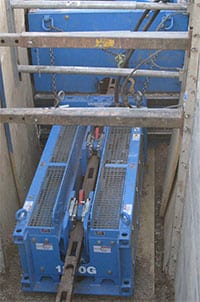 The project was divided into two pulls of approximately 1,000 feet each. But before the actual Swagelining process could begin, several steps were needed to insure a smooth installation. First crews videoed the host pipe to assess the interior condition, identify bends/major obstructions, and to identify if any old connections exist on the line the city didn’t know about. Next, the pipe was cleaned to remove major obstructions and the majority of tuberculation. Cleaning consisted of pulling metal scrappers through the pipe followed by a rubber pull-through. Finally a proving pig was sent through the line in order to ensure a free bore path of the host pipe.

While crews fused the sections of HDPE, the Grundoburst 1250G pulling unit was set in the receiving pit. Next, the HDPE string was placed on rollers and the Swagelining equipment was set in the insertion pit.

The actual Swagelining installation of each 1,000-foot pull took less than one day. Both pulls were completed without incident and averaged around 3.5 hours. After the installation, the main was filled with water and pressure tested. AWWA chlorination standards were then performed and final restoration of launch/receive pits was completed.

Mayer said, “The equipment pulled with ease as only about 70 tons of pull back was required for each installation. The Grundoburst unit provided constant tension, which means the rods were locked in place at all times, which was important if we had needed to stop a pull for any reason. The equipment ran smooth the entire time.”