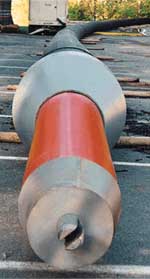 A $2 million price tag to trench and replace a crushed storm drain on their campus was out of the question, according to facility officials at the University of Virginia, Charlottesville. The sewer replacement needed to be economical while providing minimal surface disruption. A stretch of 650 ft of emergency storm drain was crumbling from too much weight. The original storm drain was installed in the late 1930s, in what was then a ravine. As the university grew over the decades, more and more fill was deposited into this gully. The 50-year-old pipe was now buried as deep as 41 ft, beneath tons of dirt and rock.

The situation came to a head when the university could not secure an occupancy permit from the state of Virginia Division of Water Resources for a new $20 million chemistry building and adjacent science building until the crumbling storm drain was repaired.

With nearly $40 million in real estate potentially sitting idle, the university needed the replacement to be done quickly and economically. Peter Drenan, senior project manager for facility management at U of VA, Charlottesville, started researching alternative methods to trench and replace. Drenan wanted to find a pipe replacement or rehabilitation method that incorporated positive social factors and was economical.

Drenan first looked into pipe jacking and found the process to be too costly. It also would have demanded digging four to six pits. These would have meant the removal of mature trees and historic structures. The method also requires the installation of a double wall pipe, which was in excess of what the replacement entailed.

Other methods discussed were microtunneling and sliplining. Microtunneling was determined also to be too expensive, and sliplining, although affordable, could not meet all of Drenan’s criteria. He stated that because the old pipe had become disjointed, pipe lining could do nothing to align it. What’s more, the lining would not enhance the strength of the crumbling clay pipe. He then remembered reading about pipe bursting in Trenchless Technology and decided to contact manufacturers for information.

Drenan then contacted several of these contractors, including Atlantic Coast Contractors, Inc. (ACC) of Charlotte, NC. ACC is a general contractor that has a background in new installation and rehabilitation of utilities, including water, sewer, gas, and storm drains lines. Upon the university’s request, ACC went to work preparing a bid that specified pipe bursting.

The bid from ACC, using the pipe bursting method, came in at a fraction of the original $2 million trench and replace cost estimate. This trenchless process also provided for the alignment of the line without disrupting mature trees and historic structures. ACC was awarded the Emergency Storm Drain Replacement at Scott Stadium East Parking Lot contract on March 3, 1995.

The job was to burst existing clay pipe, as large as 24-in. OD, and upsize to 28-in. SDR-11 Plexco HDPE pipe. This would require using a 30-in. expander to create enough room for the pipe, which has a 34-in. OD. A burst of this nature had not previously been attempted.

Concerns existed that this particular pipe bursting application was still theoretical, especially when upsizing that large a pipe within a deep, crumbling line. After viewing internal footage of the drain, ACC president John Butler said, &The video also showed where two boulders had penetrated the pipe.&

With these and other obstacles looming, the combined effect of the pneumatic tool and the constant tension provided by the winch would prove to be more than sufficient. This is what Schwager, TTÕs on-site manufacturer’s rep, was banking on.

ACC crews arrived in mid-April to begin preparing the entry and exit pits. This proved to be the most time consuming aspect of the entire project. Plans were made to ensure the success of the burst. Another task was to prepare a back-up plan. In the chance that the burst was not successful, Butler had made provisions for trenching and emergency bypass pumping.

&We all agreed to do it right,& said Drenan, adding, &We wanted to minimize the change of failure.& This included the service of equipment, using new hoses, and taking the time necessary to make certain that every component was prepared to the fullest extent.

The failing storm drain ran between two parking lots which were separated by the filled-in ravine. The entry area was adjacent to a hillside stairway, from which passers-by could get a bird’s-eye view of the tool as it waited for installation. Behind it rested the PE pipe, snaking it’s way around the side of the parking lot into a wooded area.

The job was divided into two bursts. The first burst was slated to be 400 ft with the second at 240 ft. The tool selected by ACC was the TT Technologies Goliath pneumatic pipe bursting tool. ACC was experienced and licensed in the art of pipe bursting, owning a Grundocrack Gigant machine for over two years. This job, however, required the rental of the more powerful tool.

The 18-in. diameter Goliath tool was fitted with a 30-in. rear expander to facilitate the pipe upsizing. Fitted to the rear of the expander was the PE pipe. A short segment of PE is threaded into the expander, with the full length of pipe then fused to that segment.

Near the point of entry stood a bentonite mixing machine, a very important system for the successful completion of bursts of this magnitude because it lubricates the exterior of the tool and PE pipe. This reduces the majority of the friction that occurs during installation.

At the exit end, a 20-ton Grundowinch was positioned to provide constant tension to the tool. A steel cable was attached to the pulling eye at the head of the Goliath, pulling and guiding the assembly all the way to the exit pit once the job was started.

The first burst was scheduled to take place on Monday, April 24, but had to be delayed because of the threat of heavy rains. Drenan required that the 48-hour forecast be dry in order to proceed with the burst. The burst was finally started first thing the following day.

This 400-ft run was shot at an average depth of 25 ft. At first it was slow going, proceeding at a rate of about 4 to 6 inches per minute–not an encouraging sign to the contractor. If the tool were to stop, it could result in extensive efforts to recover it and complete the remaining pipe installation.

Not long after the start of the burst, the tool’s progress began to accelerate to a rate of several feet per minute. It was expected that the burst would proceed somewhat slowly, simply because of the dead weight of the 400 ft of pipe. Schwager estimated the total weight of the tool, expander, and pipe at 49,000 lbs!

The initial drag was attributed to the long length of pipe curving through the parking lot at the beginning of the installation. The further the pipe was pulled in, the more it straightened, eliminating the effect. Butler also credited the increased use of bentonite for hastening the installation.

This meant that the 400-ft burst was completed in less than 5 1/2 hours. The second burst was also completed rapidly, taking just under three hours for the final 240 ft of the job. The combined bursting time for the entire project was about eight hours. The total project ended up substantially ahead of schedule and on budget.

The tool worked to our expectations and the job was a tremendous success,& declared Greg Williams, ACC project manager.

ACC makes it a priority to be involved in the continuing education of new technologies in order to keep up in today’s market. With the successful installation of the university’s storm drain to its credit, ACC looks forward to even more projects where pipe bursting can be presented as an economical alternative.

What was once a theory, is now practice. In fact, it’s academic.

Pipe Bursting Integral To Base Rehab Project
Scroll to top