Anyone who has ever traveled to Santa Fe, New Mexico, has been impressed by its beauty. This upscale community is bursting at its seams with new residents and thousands of tourists annually.

All sorts of folks make their home in Santa Fe … artists, shopkeepers, innkeepers, musicians, mechanics, municipal workers, and more. It is common knowledge that residents selected Santa Fe because of the incredible landscape, pleasant climate, and the stunning southwestern beauty of the city. But, regarding the road leading to the town’s airport, the Santa Fe Wastewater Department knew that the community’s beauty was only skin deep.

A failing interceptor sanitary sewer line ran for thousands of feet beneath the community’s Airport Road, which also intersected a busy state highway. The 20-year-old line was showing excessive exfiltration. Using inspection cameras, it was immediately apparent that the 24-inch diameter steel reinforced concrete pipe was still in good condition, but most of the joints had separated allowing the exfiltration.

TT Technologies Goliath Grundocrack tool laying next to one of Triad’s trucks.

Plus, the failing line was constantly running near or at capacity because of sizable population increases. Surges of rainwater were also too much for the outdated interceptor sewer to handle after occasional cloudbursts.

Bill Landin of the city’s wastewater staff knew he had a difficult situation on his hands. To trench and replace the lines that ran beneath Airport Road and the state highway would require closing the roads. The resulting detour would take traffic as much as 20 miles out of the way. Also, the New Mexico State Highway Department made it clear that trenching through their highway was unacceptable.

Because the interceptor line was already flowing at capacity, wastewater officials also deemed it crucial to increase the diameter of the line. This eliminated thepossibility of using pipe lining to seal the leaking concrete sewer pipe.

Because the city desired a limited amount of disruption, the trenchless method of pipe bursting was included in the bid. Landin was already familiar with bursting from previous work experience. To determine job specifics, he consulted with Jack Sullivan of Sullivan Design Group. Sullivan routinely provides construction inspection and observation for the city. Remarked Sullivan, “The No. 1 issue was bypass pumping.”

The sewer line was the community’s primary interceptor, carrying the majority of sewage from town to the treatment site. Officials wanted to make certain that all fail-safes were in place for the bypass. 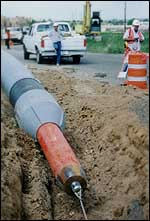 Goliath Grundocrack tool being pulled into the entrance pit.

As an experienced trenchless construction company, Triad Builders of New Mexico, Inc. of Albuquerque submitted a bid, prepared under the supervision of Vice President Terry Gorsuch, to combine pipe bursting with open cut. The company also had a creative bypass plan. Triad was awarded the bid based in part because of its ability to provide pneumatic pipe bursting. “With bursting, we could offer less disruption to the public,” said Tom Kryfko, Triad project manager.

Kryfko had become familiar with pipe bursting after networking with bursting contractors and witnessing product demonstrations at trade shows in the early 1990s. Gorsuch, a veteran of several years in the trenchless field, was aware that the company’s rammer could be converted into a pipe bursting tool with the proper expander. However, Gorsuch determined that their Koloss rammer, with a diameter of 14 inches, was undersized for the Santa Fe Airport Road bursting project.

To arrange for the proper bursting equipment, Gorsuch contacted Pipe Bursting Specialist Mike Schwager at TT Technologies. After considering the composition and diameter of the reinforced concrete pipe, the degree of upsizing, and soil conditions, Triad management decided to purchase a Goliath Pipe Bursting Tool to perform the Santa Fe job.

Wastewater officials had determined to upsize all failing 24-inch outside diameter pipe to 32-inch outside diameter, including the some 3,000 feet of pipe designated for bursting. By doing so, flow capacity would increase by at least 80%. However, soil conditions in Santa Fe were not ideally suited for upsizing for the bursting process.

Unlike glacial till or loam soils, the cobble and sand mixture would compact only minimally. A degree of soil compaction is required when a bursting tool’s expander attempts to create a larger

The replacement pipe was 32-inch outside diameter SDR 21 and SDR 26 HDPE pipe, depending on pipe depth. PE pipe’s flexural qualities and on-site fusion properties allow it to be pulled in behind a bursting tool for one-step installations for each length burst.

Triad determined that 7,500 feet of the failed sewer lines would be more economically installed via trench and replace. However, 3,200 feet, which ran beneath busy Airport Road and some adjacent landscaping, was divided into 10 separate bursts averaging 320 feet each, with the longest run established at 450 feet.

Triad crews, under the direction of Superintendent Ron Ramsey and Bursting Foreman Mike Carter, arrived in Santa Fe in late June (1997) to perform the sewer-line replacements. After implementing an incredibly effective gravity feed sewer bypass (which eliminated the need for up to eight pumps), crews were ready to burst. TT Technologies’ Mike Schwager, Rick Melvin, and Larry Gross served as technical advisers for the bursting portion of the replacements. “We were concerned with the first few bursting runs because the lines ran only a few feet below the pavement,” Gross said.

The first three bursts followed lines that were as shallow as 5 feet beneath the pavement. Utilizing an expander to accommodate the new 32 inch pipe led to some mounding of the asphalt road surface during these specific bursts.

Although the mounding was undesirable, it was also inevitable. There simply was not enough “loft” between the failed line and pavement to properly accommodate the desired upsizing of pipe, especially considering the non-compacting nature of the soil (cobble, boulders, and sand).

Crews worked from manhole to manhole, moving systematically down the center lane of the highway. The tool was launched at an excavated manhole, and exited at the next. Thus, each exit area then served as the next launch site. It is important to note that throughout the entire bursting process, two lanes of traffic remained open for the convenience of motorists.

Unlike clay sewer pipe, which offers little resistance to bursting, the issue of reinforced concrete pipe needed to be uniquely addressed. A custom 4-inch diameter shock valve was required to supply added pneumatic force to the bursting tool. The shock valve allows air pressure to build in the line to a desired level, and then be released at a preset pressure to start the large bursting tool’s piston into motion. Crews experienced some minor slowdowns when they found their initial air compressor to be inadequate because of Santa Fe’s high altitude and high ambient summer temperatures. An additional compressor was quickly accessed, and bursting proceeded. Although the bursts were challenging for the crew and bursting equipment, at no time did the 20-ton winch reach capacity.

There were few laterals for Triad crews to contend with, allowing the bursting to move along at a more efficient rate. Two gas lines closely paralleled a pair of bursting runs. Crews carefully approached these installations but quickly became aware that the bursting process would not disrupt these sensitive utility lines.

TT’s on-site advisers agreed that the Santa Fe bursts would be a challenge. Said Schwager, “Considering the length of runs and the dramatic pipe diameter upsizing combined with the difficult soil conditions, the Triad crew did an outstanding job.”

Although there were some concerns and delays, Triad crews were able to complete the bursting portion of the sewer replacement in just eight weeks. “On some runs, they were bursting at a rate of 1 foot per minute,” TT’s Melvin said.

With their first bursting project completed, the Triad staff had positive things to say about the job and the equipment. Said Kryfko, “We’re very pleased with bursting.”

Triad has purchased additional equipment from TT Technologies that can quickly convert their pneumatic pipe rammer into a bursting tool. They feel they now have the tools to accommodate the trenchless needs of both municipalities and fellow contractors throughout the 17 western states. Concluded Kryfko, “There’s quite a market out there for bursting.”