During pneumatic pipe bursting, the tool is guided through a fracturable host pipe by a constant tension winch.

Seismic activity is a part of life in California. Since the great earthquake and fire in 1906, Californians have been conscious of the ever-present possibility of a devastating seismic event. They have also been preparing for such an occurrence by improving and implementing earthquake-resistant technology. That effort continues today with the reinforcement of roads, bridges, buildings and other infrastructure. One of the most needed services during any disaster is the delivery of potable water. One water district in Northern California recently utilized trenchless technology, specifically pneumatic pipe bursting, to help complete a seismic upgrade and retrofit one of its key watermains.The Marin Municipal Water District (MMWD) serves 170,000 residents in Marin County, California, from the Golden Gate Bridge north 20 miles. The area is very seismically active, experiencing a number of credible seismic events every year. Even with the San Andreas Fault laying to west and the Hayward Fault to the east, the district is committed to maintaining service to its customers after a maximum credible seismic event. A 15-year seismic upgrade/retrofit plan is currently in place. The Hawthorne Hills Tank System upgrade is part of that plan.

MMWD Project Engineer Kevin McDonnell said, “The Hawthorne Hills Tank System is part of the backbone transmission system for the MMWD. A recent Integrated System Reliability Study identified the system as particularly vulnerable to significant damage from an earthquake. Improvements needed to be made to the tank and fittings. In addition, the existing 12-in cast iron main, installed in 1928, was determined to be at risk as well. This warranted immediate attention because a break in the line could release more than a million gallons of water.”McDonnell identified three options for replacing the 2,200 feet of cast iron main line. The first was conventional trench and replace, the second was re-routing the line and the third was pneumatic pipe bursting. McDonnell said, “We considered open cutting and replacing the pipe with new pipe in the same right-of-way, but the existing right-of-way is only 10 feet wide. There are several encroachments including retaining walls, driveways and decks. All of these factors made conventional construction very expensive.We also considered re-routing the pipe but found the same problems. The work would be very expensive and require twice the length of pipe. In addition, the design would not satisfy the goal of keeping a looped system.” The district invited Pipe Bursting Specialist Collins Orton from trenchless equipment manufacturer TT Technologies (Aurora, IL.) to evaluate the project’s potential for pipe bursting.

During pneumatic pipe bursting, the pipe bursting tool is guided through a fracturable host pipe by a constant tension winch. As the tool travels through the pipe its percussive action effectively breaks apart the old pipe and displaces the fragments into the surrounding soil. Depending on the specific situation, the tool is equipped with an expander that displaces the host pipe fragments and makes room for the new pipe. As the tool makes its way through the host pipe, it simultaneously pulls in the new pipe, usually HDPE.With the use of expanders, one tool can be used to burst several different size host pipes and replace them with new HDPE of the same size or larger. Pipe bursting is the only trenchless method of rehabilitation and replacement that allows for the upsizing of the existing pipe.Orton said, “The existing pipe was installed on a steep mountainside in a very shallow trench. In some places, the top of the pipe was visible. Many homes, driveways and other encroachments along the right-of-way made a trenchless method of replacement the preferable option. Pipe bursting was well suited to replace the 12-in cast iron pipe and the new High Density Polyethylene pipe would meet the MMWD’s seismic retrofit requirements.”Pipe bursting was not only a preferable method of replacement based on its installation capabilities but also because of the cost factor. According to McDonnell conventional construction of the 2,200-ft run would cost an estimate $200 per foot. Re-routing the project would cost approximately $150 per foot, however, that option would require and additional 2,000 feet of new pipe. Pipe bursting would not only utilize the path of the existing line, it would eliminate major restoration costs and could be completed for about $150 per foot, approximately $110,000 less than the closest comparably priced option.The project was bid to the public as a pipe bursting job. Engineering contractors Maggiora & Ghilotti, Inc., San Rafael, CA, were chosen to replace approximately 1,600 feet of the 2,200-ft project through pipe bursting. A majority of the bursting would be completed in the narrow and encroached right-of-ways of the Hawthorne Hills Tank System. The remaining 600 feet would be replaced by open cutting in areas more suitable to that method.

The Maggiora & Ghilotti crew had its work cut out for them. They were contracted to relocate services, prepare new valve clusters, fuse and pressure test the new 12-in SDR 11 HDPE, cut and plug the old cast iron pipe, connect the new valve clusters, video the existing line and pipe burst. After bursting was complete, the crew needed to pressure test the HDPE again as well as chlorinate it and run a bacterial test before the new line could be put into service.McDonnell said, “Preparation for bursting went well; services were moved, valve clusters cut in and the HDPE fused and tested. Access pits for the bursting tool and HDPE were perfect and the video confirmed the location of pipe elbows in the existing line. They were removed before bursting began.”

With the use of expanders, one tool can be used to burst several different size host pipes and replace them with a new HDPE pipe of the same size or larger.

The Maggiora & Ghilotti crew used a 10-in diameter Grundocrack Gigant pneumatic pipe bursting tool from TT Technologies. The Gigant was equipped with a 16-in rear expander and a snap-on bladed guide head (schnozz).According to Orton, the guide head is essential to the success of the bursting operation. He said, “The guide head or ‘schnozz’ is attached to the front of the pipe bursting tool and adds needed tool length. It allows the tool to get into the pipe and break it at its weakest point, the inside. Cast iron pipe tends to break several feet in front of a standard pipe bursting tool. This causes the potential for two major problems. First, the shards of cast iron pipe are sharp and can actually cut winch lines. Second, pipe fragments can build up making the host pipe impassable. This can cause the tool to change direction and veer off course. The guide head helps prevent these problems.” Cutting blades can be welded directly to the guide head. The blades focus the percussive action of the tool and greatly enhance overall bursting power, allowing the tool to successfully burst difficult host pipes, like cast iron as well as many point repairs like PVC.A 10-ton dual capstan, constant tension Grundowinch was used to guide the tool through the host pipe. 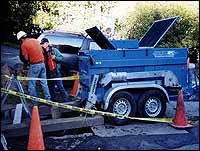 The pipe bursting took place over three separate runs. The first run covered 900 feet from the intersection of Carlson Ave. and Carlson Court through the right-of-way to the lower tank area. The second burst ran from the Rosemount Ave. Cul de Sac through the right-of-way to Oakwood St. 500 feet away. The third and final 200-ft burst ran from the lower tank area to the upper tank area (See diagram).While the bursting went well, several challenges were encountered along the way. McDonnell said, “The first obvious issue was ground cover. We knew from the start that the ground cover did not meet manufacturer’s recommendations. However, since the installation was in an unimproved right-of-way, some disturbance was acceptable.”The bursting crew also encountered an unidentified steel dresser coupling. After completing a small excavation the crew made two cuts along the top of the coupling with a dry saw. As soon as Gigant started moving again, the coupling sprung open and bursting went on. The runs were completed in a total of six hours.

This was the first major bursting project for the MMWD and according to McDonnell the job provided some keen insights into pipe bursting projects. He said, “One very important lesson we learned was that the public very much supports alternative methods of construction. Many neighbors talked to us and some sustained some property disruption during the bursting operation. However, all recognized that the disruption would have been far worse had we tried a conventional open cut method. All the neighbors appreciated our efforts to minimize the project’s impact.”McDonnell also said working closely with the HDPE suppliers and pipe bursting manufacturer produced great results during the project; and the importance of the contractor could not be overstated. McDonnell said, “A good contractor makes the engineer look good. We were very fortunate to work with Maggiora & Ghilotti, a highly skilled contractor who took the project very seriously and dedicated their best team to the job.”Despite the minimal ground cover and obstacles encountered McDonnell said that pipe bursting was “absolutely” the best method of construction in this case. He said, “Pipe bursting created the least disturbance for residents in the area and provided the least cost solution for the MMWD. We would recommend using pipe bursting on a similar project in the future.”

The New Guided Piercing Tool Steering the Gas Industry in the Right Directi...

Ready for Ramming: Murphy Bros. on the Alliance Pipeline
Scroll to top