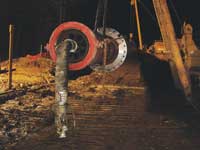 With some of the largest, including the largest, and difficult directional drilling projects already in its portfolio, Southeast Directional Drilling (SEDD), Tempe, AZ., continues to complete spectacular gas and oil pipeline projects in some of the most difficult locations in the world. But that doesn’t mean it all comes easy. SEDD relies on years of experience as well as innovative thinking when it comes to tackling these difficult horizontal directional drilling (HDD) projects.

According to TT Technologies pipe ramming specialist Rick Melvin, these techniques have become very valuable to directional drilling companies. He said, “Like any other construction application, directional drilling can run into difficult situations. In certain situations using the percussive power of pipe ramming tools can help overcome problems with pullback, stuck drill stems, stuck pipe and difficult soil conditions. These techniques can mean the difference between project success and a very costly failure.”

Southeast Directional Drilling was founded in 2002 by several members of Ozzie’s Directional Drilling, Scottsdale, AZ. Ugrich said, “In 2000, Ozzie’s was purchased by an investment group out of New York. In the spring of 2002, the investment group wanted to get rid of the directional drilling division. The president of Ozzie’s, Mark Osadchuk approached a group of us to see if we were interested in purchasing the division. We were able to do so and were able to acquire two big rigs from Ozzie’s. That’s how it went. We started out with two rigs and we just bought number seven yesterday.”

Ugrich estimates that ninety five percent of SEDD’s work is oil and gas industry related. Much of that is considered large diameter. Ugrich said that during much of the previous year their projects consisted of installing 42-inch diameter pipe. The same will be true for the next several years as well. Installation lengths range between 1,600 feet up to 5,000 feet plus. Ugrich said, “We’ll be drilling the Mississippi River this year and that will be 5,100 feet of 42-inch pipe. Last year we did two shots that were over 3,000 feet each.” SEDD also holds a world record for the installation of three 56-inch diameter pipes in Trinidad. 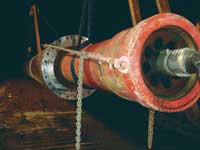 Crew size at SEDD fluctuates depending on the season. At peak times during the summer SEDD employs between 70 and 80 people. But safety is a year-round topic and Ugrich tries to keep it in the forefront of everyone’s mind. SEDD recently implemented a new safety incentive program. Ugrich explained, “We’ve always done gift cards. If a crew goes through a week without an incident or accident, each crewmember is awarded a twenty-dollar gift card to a major retail store. It just gives them a little incentive to watch out for their buddies, because if one person has an incident or accident, the whole crew loses that card for the week.

Now we’re adding another program where we’re going to hold two drawings, one in July and one in December where we’re going to award a couple of very nice shotguns. Even if it costs us $3,000 dollars for those two drawings, it’s worth it if they all watch out for each other.” In order to be eligible for the drawings, a crewmember must have remained accident free the six months leading up to the drawing and must meet other employment criteria.

In addition to incentive programs, all SEDD crew members receive mandated DOT training courses, as well as internal safety instruction. Crewmembers also go through a JHA job hazard analysis each morning and combine that with a toolbox safety meeting. Ugrich said, “We’ve worked up forty five toolbox safety meetings that adapt to everything we do as a directional drilling company. After a crew goes through all forty five, they roll back to number one as a refresher. And with the JHA job hazard analysis, they’ll go through the specific activities for that day. Let’s say you’re finishing the pilot bore and ready to backream, the JHA for that day will focus on backreaming.”

Once a year, SEDD’s drill rigs come in for maintenance. Ugrich explained an added value of their maintenance program. He said, “Each rig comes into the shop for a full overhaul, hydraulic pumps, motors, the whole nine yards. And the good thing is, that crew comes in with it. So when the hydraulic motors and pumps are being taken apart, it’s the crew doing the work. They know the preventive maintenance procedures and how to fix the machine.”

The concept behind using a pipe rammer to remove a stuck product pipe (bore salvage) or remove stuck drill stems (drill stem recovery) is simple yet highly effective. During a bore salvage the pipe rammer is attached to the end of the partially installed product pipe. The pipe rammer needs to be attached to the pipe so that it pulls the pipe from the ground. This can be accomplished through a fabricated sleeve. A winch or some type of pulling device is used to assist the rammer during operation. In many cases, the percussive power of the pipe rammer is enough to free the stuck pipe and allow it to be removed from the ground.

Melvin said, “In these situations typically the contractor has run out of options and is looking to salvage the project. Drill stems are expensive. Product pipe is expensive as well. The last thing anyone wants to do is leave either in the ground. Plus, by removing drill stems or product pipe, the contractor has the opportunity to correct the problem and bore again.” 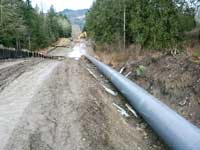 The pullback assist method works directly on getting the product pipe installed. Drilling underwater or in loose flowing soil a condition known as hydrolock can occur. Melvin said, “Hydrolock is a situation were the external pressure being put on the product pipe from ground water pressure, drilling fluid pressure and/or soil conditions exceeds the drill rig’s pullback capability or the product pipe’s tensile strength. The percussive action of a pipe rammer in this situation can help free the immobilized pipe.”

The pullback assist technique has been successfully used on steel pipe, as well as high-density polyethylene (HDPE). The technique can be used as a safety measure in anticipation of hydrolock problems or after the pipe has become immobilized. According to Melvin, time is a key factor with any of these methods. He said, “Reaction time is always important. Not hesitating to mobilize needed equipment and expertise in these situations can really make the difference between success and failure. Success rates improve dramatically depending upon how quickly problems are responded to. In fact, a number of drilling contractors are bringing ramming equipment to directional drilling sites as a form of insurance in case problems develop.”

On the Job: Riffle, Colorado

The directional drilling project in Riffle, CO., was completed for EnCana Gas, Calgary, AB, Canada. According to Ugrich, SEDD was sub contracted to install a 24-inch diameter steel gas main under a set of railroad tracks, under Interstate 70, under the Colorado River and then up a 500-foot bluff. The elevation difference between the entry side and pipe side was about 550 feet at a total length of 4,500 feet. This drill also had a 13-degree point of intersect (P.I.) at about 2,000 feet out from entry.

Ugrich said, “As we came up through the bluff it was solid cobbles and boulder and the rest of the drill was sandstone and limestone. We completed the pilot with a 6 ¾-inch Black Max motor with a 9 7/8-inch tri cone bit, once the pilot was complete, we reamed it out with SEDD manufactured reamers in sequence of a 24-inch and 30-inch, followed by a 36-inch reamer for the final pass.

One of the many problems with this crossing was the dry hole in the higher elevations. With this complication we wore out a lot of tooling due to no lubrication with drilling mud. After the mud pass we hooked up and started pulling from the high elevation down to the rig side. We only made it in about 300 feet and we lost our rotary due to the cobbles and boulders.”

According to Ugrich, the SEDD crews then attached the 24-inch diameter Grundoram Taurus pipe rammer to the end of the pipe string and started the assist. The minute they started tapping, they gained rotary back and started pulling again. Crews used the rammer intermittently throughout the rest of the pull until it was installed successfully.

Once the swab pass was complete we attempted to pull the pipe three times before we were successful. On the first attempt we twisted off in front of the reamer, but were able to pull the pipe out with winches. The second time we broke off, however, we had to fabricate a extractor barrel and perform a bore salvage with the hammer.”

Before attempting the third pipe pullback, the SEDD crew dug back from the exit pit about 180 feet until they reached approximately 40 feet deep in order to large boulders and debris from the bore path. About half way into the pullback, at the 2,000-foot mark, pulling tensions spiked and crews mobilized to attach the pipe rammer to the back of the pipe string. Operating the pipe rammer at half its power, the percussive action was able to reduce the friction at the lead end of the pipe and keep the pullback moving and successfully complete the installation.

Ugrich said, “The TT hammer gives us a big sense of security when we’re pulling these large diameters. We own a 24-inch hammer and if we’re pulling large diameter pipe, that hammer is on site. It’s nice to know that if you get into a high pull-range, the hammer is there to help reduce the friction.”