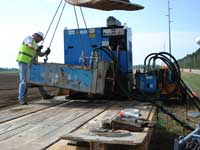 Static pipe bursting continues to establish itself as a preferred method of pipe rehabilitation and replacement in the United States and North America. Literally hundreds of thousands of feet of pipe has been replaced throughout the US in just the last few years utilizing this trenchless method. Allen Steele Company, Lake Delton, WI is a good example of an established contractor expanding its service offerings to include static pipe bursting. Recently, the contractor took on one of the largest pipe bursting projects ever completed in the middle of the country’s heartland, Wisconsin.

The project in Wisconsin was performed for the Ho-Chunk Nation and the Rainbow Casino. The casino is located in the town of Port Edwards about 5 miles southwest of the city of Nekoosa. According to Scott Chilson, Project Engineer, MSA Professional Services, Baraboo, WI, project planning and preliminary design began in 2003. The project included replacing approximately 24,000 lineal feet of 4-inch HDPE sewer force main with 8-inch HDPE. The design was completed during 2005-2006 and the project was bid in early summer of 2006.

Chilson said, “The project was bid by invitation only and the Allen Steele Company was the successful bidder. The firm has been performing HDD construction services for several years. However, this was the first pipe bursting project they have performed. MSA and Ho-Chunk contacted Bill Brennan, TT Technologies, for assistance using the trenchless static pipe bursting method.”

The Allen Steele Company was founded in 1957. Since that time, Allen Steele and his company have earned an excellent reputation with owners and engineers as a premier underground and site utility contractor. The company specializes in excavating, site grade, municipal and commercial sewer and water, as well as underground cable installation services.

MSA Professional Services was founded in 1962. The company boasts a wide range of engineering, architectural and planning services for the municipal and government, transportation, real estate and development, and environmental sectors. Headquartered in Baraboo, Wisconsin, the company has twelve satellite offices in four states and has garnered a solid reputation for quality and vision.

Together MSA Professional Services and the Allen Steele Company completed one of the largest static bursting projects in the Upper Midwest. 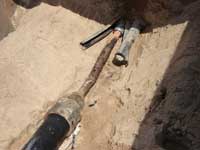 The static bursting process is simple, yet effective. Specially designed bladed rollers are pulled through an existing line by a hydraulically powered bursting unit. As the bladed rollers are pulled through, they split the host pipe. An expander attached to the rollers forces the fragmented pipe into the surrounding soil while simultaneously pulling in the new pipe, typically HDPE.

Patented Quicklock bursting rods are linked together not screwed together like traditional drill stems or other static systems. This system speeds the installation process as well as the breakdown procedure. The rods can be quickly removed one at a time at the exit pit as bursting is in operation. And while HDPE is commonly used, new techniques and technologies are allowing contractors a choice when it comes to product pipe. Other pipe materials that can be installed through static bursting include ductile iron, PVC, specially designed clay and even steel.”

According to Brennan recently there has been great success in utilizing other product pipe materials with the static bursting process. He said, “In many cases HDPE is the right choice for product pipe. However, in some situations it’s ductile iron, in another it’s PVC. Over the last several years, techniques have been developed to allow the use of a variety of product pipe options, like ductile iron and PVC, with static bursting. It provides contractors, engineers and municipalities a great deal of choice and flexibility when it comes to the Grundoburst static bursting method and further demonstrates the maturity of the process in the US market.” 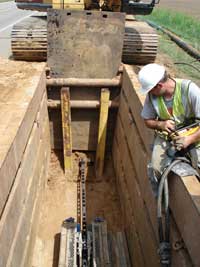 To speed the bursting process crews would divide a 1,000-foot section of pipe into two bursting runs. By placing the Grundoburst unit in the middle of the two runs, crews were able to burst one section of pipe and feed the Quicklock rods into the next bursting run sim

ultaneously. So as one run was completed, crews simply rotated the bursting 180 degrees to burst from the other direction.

According to MSA, the Rainbow Casino and nearby businesses and residences had been served by an aging sanitary pump station and force main. The pump station and force main conveyed the wastewater to the Nekoosa Wastewater Treatment Plant. The city accepts the flows from the casino and other users. Growing concerns with the reliability and capacity of the existing pump station along with pending future expansion and development prompted the Ho-Chunk to consider action.

Chilson said, “MSA Professional Services evaluated the existing system and offered a recommendation. The outcome of the evaluation was to replace the pump station with a new facility and to increase the size and capacity of the existing force main. A site for the new pump station was readily available. However, the privately owned force main was located in the public right-of-way controlled by Wood County, the town of Port Edwards, and the city of Nekoosa.

During the preliminary design, MSA and Ho-Chunk contacted the county, town, and city to discuss the feasibility of the installation of another larger force main. The governing agencies granted the Ho-Chunk permission to install and operate in the public right-of-way. However, they expressed a desire that the construction be conducted in the method that would minimize surface disturbance.”

Based on that request, static pipe bursting became the method of choice for the project. According to Steele, the previous main installation project left a poor impression on the residents of the area. He said, “When the original 4-inch force main was installed, the contractor did not restore the roads, driveways and turf to the local resident’s satisfaction. MSA Professional Services considered the options of open cutting, directional boring and pipe bursting. Open cut was ruled out because of the public relations situation. MSA Professional Services and TT Technologies worked together to come up with the best approach to this project.” The final project design included approximately 20,000 lineal feet of static bursting and another 4,000 feet of HDD installation.

Because of the significant upsize and sandy soil conditions, Bentonite lubrication was used. The Allen Steele crew utilized a Grundomudd DS 500 Bentonite mixing and delivery system, also from TT Technologies. During bursting runs a Bentonite slurry was pumped through a hose that ran inside of the new 8-inch HDPE. A hole was drilled near the lead end of the pipe and a Bentonite manifold was attached. This allowed the Bentonite slurry to be pumped during bursting operations. 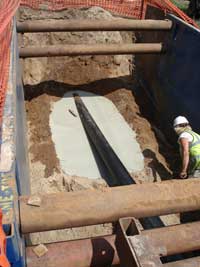 Bentonite lubrication was used because of the significant upsize and the sandy soil conditions in the area. A special Bentonite manifold was installed on the lead end of the pipe to delivery the lubricant.

According to Steele, for a typical run, the crew would choose a 1,000-ft section of pipe and divide it in half, placing the exit pit in the middle of the run and dig launch pits at either end of the 1,000-ft section. He said, “We used a 5-foot spreader bar on a 25-foot box for the exit pit, where the hydraulic bursting unit was placed. For the launch pits we were able to get by with an even smaller, 8- by 20-ft box. The existing 4-inch main ran between 6 and 7 feet deep in most areas.”

This approach helped speed up the bursting process and improve efficiency. First crews would feed the Quicklock bursting rods through the first 500-foot section of pipe from the exit pit to the launch pit. After the rods arrived at the launch pit, the splitting head, expander and fused HDPE were attached and pullback begins.

At this point, instead of removing the bursting rods one at a time at the exit pit during the pullback, they pass through the hydraulic bursting unit, connected, and are fed into the next 500-ft section of pipe. So as one run is completed, the rods are placed in the next section of pipe. All the crew needs to do is lift and turn the bursting unit 180 degrees and prepare for the next run.

Allen said, “The fusing of the pipe took place well prior to the actual bursting. Installing the trench box and maintaining the safety for the crew was probably the most time consuming aspect of the project. The actual pulling operation took between two and three hours per 500 feet. Plus, we were able to pull 500 plus [feet] per pull and we were able to make two pulls from each pit, which really helped speed things up. The crews had one week in particular, working nine-hour days, where they were doing 1,000 to 1,100 feet per day. During that one week period of time the boys put in over 6,000 feet of new pipe.”

Chilson said the project was challenging in numerous ways. He said, “The project was big in length at just under five miles. It also included a large upsize, increasing the force main two diametric sizes. We had to contend with a short construction schedule, plus coordinate and gain the trust of a new construction method by all the project stakeholders. The project itself was basically the construction of a private utility within a public right-of-way that crossed three separate jurisdictions. Physically, the main crossed a trout stream, two high-pressure crude oil pipelines, two county highways and a highly traveled county road. There was even a fiber optic communication line located above the existing force main. This project had a little bit of everything.”

According to Steele for a first bursting project this one left a positive impression on his crews. He said, “By the end of the project, the crews enjoyed it [the bursting process]. They got the system down pat. In the beginning they resisted. The crews were accustomed to open cut techniques. They’re very good at it. But now, we can see the benefits of static pipe bursting. We’ve done a 180 on it. In the right place, it’s the right way to go.”

Chilson said, “From the engineer’s perspective, the large number of stakeholders plus the numerous physical challenges related to this project style added to the long list of unknowns and risks. In the end though, the project was completed on schedule without any unforeseen situations. The project team, including the Allen Steele Company, TT Technologies, and MSA Professional Services, made this happen. The success of the project was due to a true team effort. The project would not have been possible without the trust the Ho-Chunk Nation extended to MSA in allowing the use of this progressive construction method and approach.”

With A Little Help From My Friends: Sunland Construction Completes Large Diameter...