Spiniello Companies, Fairfield, NJ, was recently awarded a project to help McGuire Air Force Base New Jersey overcome problems with its potable water system. But while the Air Force is steeped in tradition, it is also a proponent of new technology. Traditional open cut construction was not an option on this project. The much stealthier trenchless pipe bursting method was specified.

Spiniello Chief Engineer Joe Dioslaki said, “We actually bid the project without a design or plans, site unseen. But the reason it was done that way was because time was of the essence. They needed these repairs done right away. So we approached it as a design/build in a sense. They needed a contractor to come in, layout the bypass system and build the project as it was being planned. And that’s what we did.” 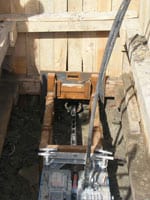 The trenchless pipe bursting method was specified for the project at McGuire Air Force Base. Because the process is trenchless, disruption is kept to a minimum. Everyone involved with the project was pleased with the results.

The history of McGuire Air Force base goes back to World War One and the beginnings of Fort Dix. According to a brief history of the base available through the McGuire Air Force Base public affairs office, Camp Dix, as it was called back then, was a key mobilization training base during WWI and remained viable after the war. It featured a single airstrip cut into the surrounding pastureland. That changed during the years leading up to World War II when the base saw additional concrete airstrips and a re-designation as Fort Dix Army Airfield.

By the end of the WWII air operations ended at the base, but it was soon reopened in 1948 at the onset of the Cold War and rededicated as McGuire Air Force. Since that time, McGuire Air Force Base and Team McGuire, as they are known, have participated to some degree in almost every major military action since 1948.

But while the base has grown in operations and importance over the years, its water systems have slowly deteriorated. After a series of main breaks it was decided the system needed to be replaced. With a majority of the system being asbestos cement pipe it was hoped that open cutting and removing the pipe could be avoided. The project was ultimately specified as pipe bursting only and Spiniello Companies was brought in to tackle the project.

The existing asbestos cement water system at McGuire Air Force base was deteriorating. Several main breaks had prompted the replacement on much of the system.

Spiniello Companies also has a rich background. The company was established in 1922 and soon became recognized as a leader in utility and heavy construction in New Jersey and several other states. Today, Spiniello Companies has over 50 years of experience in pipeline rehabilitation and over 80 years of experience in heavy construction. Throughout its history the company has welcomed new technology and benefited tremendously from this attitude.

Spiniello completed its first cement mortar lining in 1946 and since then they have rehabilitated over 14 million feet of pipe through that method. The company is also well known for its cured-in-place and sliplining skills. The project at McGuire gave the highly skilled contractor the opportunity to expand its experience with pipe bursting.

In addition to fracturable pipes, the static Grundoburst is able to burst ductile iron and steel pipe and repairs. Until recently this was a major limitation of pipe bursting equipment. The systems bladed roller cutting blades are key to this clean pipe slitting process.

During the static bursting process, the Grundoburst’s specially designed bladed rollers are pulled through an existing line by a hydraulically powered bursting unit. As the bladed rollers are pulled through, they split the host pipe. An expander attached to the rollers forces the fragmented pipe into the surrounding soil while simultaneously pulling in the new pipe, typically High Density Polyethylene (HDPE).

Cocogliato said, “The bladed roller configuration is an essential part of the Grundoburst’s success. The specially designed bladed rollers actually split the host pipe instead of ripping or tearing it. This is a clean process and prevents potential damage to the product pipe.

“Patented Quicklock bursting rods are linked together not screwed together like traditional drill stems or other static systems. This system speeds the installation process as well as the breakdown procedure. The rods can be quickly removed one at a time at the exit pit as bursting is in operation. And while HDPE is commonly used, new techniques and technologies are allowing contractors a choice when it comes to product pipe. Other pipe materials that can be installed through static bursting include ductile iron, PVC, specially designed clay and even steel.”

The project at McGuire Air Force Base required Spiniello crews to burst and replace over 8,250 linear feet of 3-inch through 12-inch asbestos cement water main. In order to facilitate the bursting of the water mains, the Spiniello crew established an intricate bypass system. The yearlong project began in the winter and Dioslaki said maintaining the bypass was no small task. He said, “We had installed a temporary, above ground bypass with a restrained joint PVC pressure pipe system. The bypass served all of the buildings on the network that we were bursting. It was challenging because we had to keep that bypass running through an extremely cold winter and make sure it didn’t freeze. We made sure to keep the water moving and incorporated several flush points. Other areas we insulated with hay.”

Typical launch and exit pits were 20 feet long and 6 feet wide. Excavation was kept down to an absolute minimum. Dioslaki said, “This is an Air Force base, you can’t have excavated materials and pipe lying around. It’s not conducive with the activities at an Air Force base. It has to be clean. And that’s what pipe bursting was able to do. Keep disruption down.”

Most of the bursting done for the project was size-to-size replacement. For one of the final sections, the Spiniello crew burst and replaced 8-inch asbestos cement pipe with 12-inch HDPE. According to Dioslaki many runs were challenging. Crews encountered numerous steel couplings and repair clamps throughout bursting operations. Runs averaged 200 feet in length with the longest being 400 feet. Bursting times averaged two hours per run.

Once the bursting rods were installed through the host pipe, the Spiniello crewmembers attached the bladed cutting wheels, bursting head, expander and new HDPE.

The entire configuration was then pulled back by the hydraulically powered Grundoburst through the host pipe. The bladed rollers split the host pipe. The bursting head and expander displaced the fragmented host pipe into the surrounding soil while the new HDPE is pulled in simultaneously.

On a typical run, the Spiniello crew began by digging a launch pit at one end of the line being replaced, and an exit pit at the other end. The bursting unit was positioned in the exit pit and connected to a hydraulic power pack. Then crews began inserting the locking bursting rods through the existing asbestos cement main and into the launch pit.

Once at the launch pit, the Spiniello crew attached the bladed cutting wheels, bursting head, expander and new HDPE. The entire configuration was then pulled back through the host pipe by the hydraulic bursting unit. The existing asbestos cement main was effectively burst and the new HDPE was installed without incident.

Once bursting was complete, the Spiniello crews went to work chlorinating and pressure testing the new lines and preparing them for service.

According to Dioslaki the crews adapted quickly to the static bursting technique. He said, “Right now they think it’s great, but in the beginning they were a little apprehensive. It’s a new technology for them. A lot of the work our crews do is rehabilitation of the existing main and I think some of the older-time folks thought it was going to compete with the cement mortar lining; which they love. But when they started doing the static bursting they realized that this has its own market. And it was really another tool in the tool box.”

Dioslaki also pointed out the crews found that the methods have a lot in common. He said, “You have to do all of the same preparation work, the excavation, temporary bypass, replacing valves, replacing hydrants and so on. When you go to do the lining, you’re pulling cleaning tools through the existing pipe. When your bursting, you’re pulling an expander, cutting blades and the new pipe. There are a lot of similarities and the crews are very efficient at this type of work. It’s what they are good at so it was a very smooth transition.”