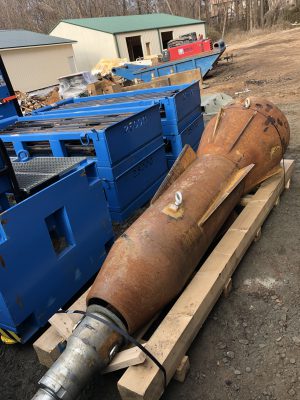 Static pipe bursting continues to be a popular trenchless choice throughout the United States and Canada. The method has become a mainstay for trenchless contractors and municipalities alike. The method’s versatility when it comes to utilizing a variety of product pipes along with its ability to upsize existing lines has made it a preferred trenchless method. On a recent project in South Carolina, USA, static pipe bursting proved to be the right choice in a difficult setting.

TT Technologies Pipe Bursting Specialist Brian Hunter said, “With limited access and extremely wet conditions due to the main’s proximity to a golf course irrigation pond dam, open cut was not a very attractive solution. So, we worked with Roper Brothers on the possibility of an upsize from 24-inch pipe to 30-in. pipe through static pipe bursting. We had several discussions about the length of the pulls, pipe material, and ground conditions.

“We determined that a large static pipe bursting machine would have the power to upsize the existing pipe. The project owner Easley Combined Utilities (ECU) Easley, SC, had finally reached a point where they could no longer hold off on upsizing this line. But, they had experience with successful, smaller diameter pipe bursting projects in the past and agreed to the change in specification.”

After considering the potential length of the pipe bursting runs, the pipe materials involved, ground conditions, etc., a Grundoburst 2500G static pipe bursting system from TT Technologies would have the power to cut and expand the RCP and to pull in the 30-inch diameter HDPE.

Bursting Above the Cut

The static pipe bursting method has seen continual growth and acceptance in the North America market over the last several decades. Hunter attributes that growth to several key capabilities that it has, along with another pipe bursting methods. He said, “Pneumatic pipe bursting really paved the way for pipe bursting in the US and Canada. High production tools for replacing miles and miles of infrastructure were key. When static pipe bursting was introduced, it changed things. Here was a method that was extremely capable in terms of the pipe it could be used on. Pneumatic was limited to fracturable pipe, but static isn’t. Cutting heads and blades allowed it to be used on difficult host materials like ductile iron and even steel in certain cases. 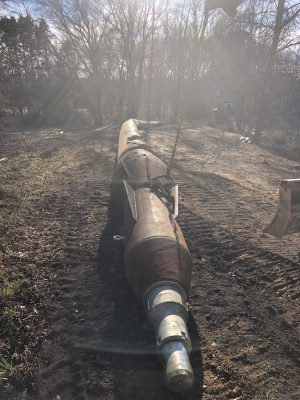 The bursting head configuration and pipe string is moved into position for a section of pipe bursting.

“In addition to that, static pipe bursting opened the door to using a large variety of new product pipe as well. Contractors were now able to meet pipe specifications that included pipes beyond just fusible. They could utilize sectional or segmented pipe, both restrained and non-restrained joint pipe. For this project however, HDPE was specified and was a good choice considering the conditions.”

Upsizing the original pipe diameter was a major consideration for the project. Some extremely large upsizes in the 120-125% range or 4 to 5 nominal sizes have been successfully completed through bursting. The 25-50% upsize is much more common, but is still challenging. This project fell in the 2 to 3 nominal size range.

Hunter said, “Each job has unique characteristics and situations that have to be taken into consideration before a burst is attempted. This particular project falls in the 25% to 50% upsize. However, the jobsite conditions and the potential difficulty with bursting the existing reinforced concrete pipe, made this project more difficult than a project with optimum conditions. The existing pipe diameter was significant to start and the pipe materials of concrete with wire reinforcement posed a challenge.”

Water and Other Hazards

The gravity sewer was in a very wet area adjacent to the golf course irrigation pond with a large section actually running through the pond dam area. The tight working conditions, along with the pond made staging equipment a top priority. The contractor also faced access issues that made delivering and staging equipment even more difficult. Access was limited to one road in and out, approximately 30 feet in width, that the golf course used for maintenance access. Equipment and material deliveries had to be strategically planned in order to make sure no vehicle or machinery blocked the way or inhibited travel.

Hunter said, “Staging and pre-planning were crucial to the success of the project. It was important to have all necessary equipment and material placed in position prior to excavating the pits, since there was no other way to get to the other side once the pits were excavated. Golf course maintenance operations were halted for a time during the project.” 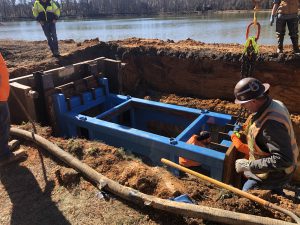 The 1700-foot project was divided into three different pipe bursting pulls of 535 feet, 537 feet and 287 feet, along with a few small areas of open cut. Once the crew established launch and exit pits, the HDPE product pipe was fused and staged ahead of time.

After the existing pipe was rodded with the bursting rods the specially designed busting head, splitter and expanding was connected, along with the pipe string. The bursting head configuration and pipe string were then moved into position for the first bursting run. The process was repeated for each pull. Bursting runs were started and completed in the same day.  During the course of the project, the static bursting machine never used more than 60% of its potential pulling power. The project lasted for a period of three weeks and further included tie-ins, manhole replacement, and power line realignment.

Roper Brothers was able to overcome the difficult working conditions at the golf course including lowering the pond level to minimize ground water, tight access, noise level of equipment in a country club and residential environment, bursting RCP with wire reinforcement and upsizing the original line.

Hunter said, “Pipe bursting as an alternative to open cut for this project really made a big difference in terms of the time it took replace the old pipe, the amount of disturbance to the golf course and neighborhood, and cost to the owner. Roper Brothers has a vast amount of experience dealing with tricky and niche type projects and were able to bring that experience to the project and provide an extremely effective solution.” 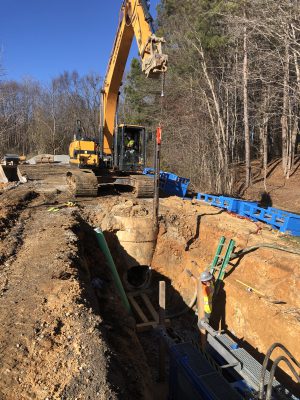 The 1,700-ft project was divided into three runs and included manhole replacement and tie-ins.