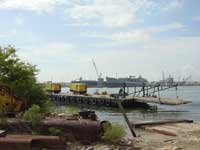 Pipe ramming continues to demonstrate its versatility, especially when it is used in concert with a directional drilling application. James Daigle, Division Manager with Sunland Construction, Inc. Eunice, LA, knows the value that pipe ramming adds when working on difficult, large diameter HDD projects. Recently, Daigle and his crews were able to complete a difficult large diameter HDD river crossing with the help of pipe ramming HDD assist techniques in Charleston, SC.

Daigle said, “Charleston Water System saw the need for additional water supply because of population growth and increasing demand. We were involved in two of the HDD portions of the project, one under Coulter Creek and the other under the Cooper River. We were subcontracted for the project by the prime contractor Skibeck Pipeline Company, Inc., Randolph, New York.”

The Clouter Creek and Cooper River bores both called for the installation of a 40-inch diameter steel water main 0.700-inch wall thickness. The Clouter Creek bore measured 2,739 feet, while the Cooper River bore was almost twice the distance at 5,481 feet. Both bores were part of a larger water main installation project for the Charleston Water System (CWS), Charleston, SC.

Anticipating the potential for challenging conditions, Daigle contacted pipe ramming specialist Brian Hunter, TT Technologies, Aurora, Ill and scheduled the delivery of a pneumatic pipe ramming tool. Hunter said, “We have worked on several highly challenging directional drilling projects with James (Daigle) and the Sunland Construction crews. Having a pipe ramming tool on site during a difficult pullback can really improve chances for success when things don’t go as planned. In this particular situation James was prepared and called ahead to have the rammer ready in case it was needed.” 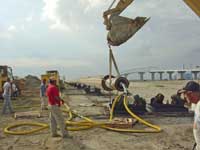 According to the its Web site, the Charleston Water System has been providing potable water to the residents of the Charleston area since 1917. Before the water utility was formed, residents got their water through wells and cisterns. But poor sanitation and contamination forced city leaders to organize and find safer, more reliable sources of water.

Today the Charleston Water System provides potable to over 101,000 residential accounts, servicing over 350,000 people. That service also includes wholesale service to the US Department of Defense and several surrounding communities. In early 2006, the CWS Board approved a $155.5 million capital improvement program to meet rising demands on its water and wastewater infrastructure. A portion of that program includes the 40-inch diameter water main that Daigle and Sunland Construction were subcontracted to install. 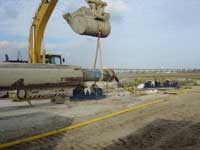 Sunland Construction was incorporated in 1974 in Louisiana. Since then, the company has become one of the largest pipeline contractors in the United States with an average workforce of 600 people and a peak workforce topping 1,600 employees. The directional drilling division of Sunland was created in 1991 and is now considered a premier directional drilling provider. The CWS project would put their skills to the test.

Directional drilling operations under water face distinct challenges. Difficult soil conditions under river bottoms, lakes and even an ocean combined with the weight of the pipe and the hydrostatic pressure of the water itself can create problems during drilling applications. Directional changes within the bore itself can compound those problems. Reaching a point during product pullback where the pulling forces required to pull in the pipe exceed maximum capability (a condition often referred to as hydrolock) is one potential problem. 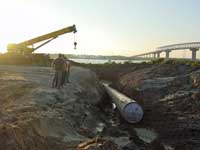 Within ten minutes of utilizing the pipe rammer, the immobilized pipe began moving and pullback was successfully completed. Sunland preordered the pipe rammer as an “insurance policy” for this difficult bore.

Daigle said, “The Clouter Creek bore was ultimately completed without issues. But we had two problems on the Cooper River bore. The first was the soil conditions. We had marl in that area. Marl is a really heavy clay type soil, a very dense material and we drilled through several thousand feet of that. We also had to contend with several deviations in elevation and alignment during the bore that added to the difficulty level.” For the project, Sunland used a self-manufactured 700,000 lb capacity drill rig.

Daigle continued, “We set up on shore, on Virginia Avenue and drilled out, under an existing refinery, beyond the refinery, under the river, and then exited out on the Corp of Engineers landfill. It’s basically an area that is used to accumulate the spoils, silts, and soil that is taken out of the river when it’s dredged. The river is dredged periodically for shipping traffic in order to maintain the proper water depth.

The product pipe was actually built by Skibeck on the spoil pile area. After the pilot bore was complete, we began the backreaming process. We made five reamer passes. We reamed a 20-inch, a 32-inch, a 36-inch, a 42-inch and finally a 54-inch. At that point, we attached the 5,500 feet of 40-inch steel and began pullback.”

The pullback began at seven o’clock in the morning on a Tuesday. By midnight, the pipe became lodged and pullback stopped 700 feet short of a successful bore. The crew shut down operations for the night. However, because Daigle had pre-ordered the Grundoram Taurus, it was scheduled to be on site the next morning at eight o’clock. An HDD Assist operation was planned.

According to TT Technologies National Sales Manager Brian Mattson, several pipe ramming techniques have been developed by TT Technologies and its partner contractors over the last few years to assist directional drill rigs in difficult situations. The techniques have been used to successfully remove stuck drill stems, assist directional drill rigs during difficult pullbacks, free immobilized product pipes and even salvage failed bores by removing stuck pipe from the ground.

Mattson said, “By utilizing the percussive action of the Grundoram pipe rammer we can really help drilling operations. These techniques can help avert costly situations where product pipes or drill stems get stuck. We’re actually seeing drilling contractors bring pneumatic pipe rammers to job sites as a kind of insurance policy. It’s been very positive for the industry.”

After the pipe ramming tool arrived on site, it was loaded on a barge with two 1600 cfm air compressors and towed to the spoil pile area. According to Hunter the HDD pullback assist procedure is fairly simple to understand. He said, “The whole idea behind a pullback assist is to utilize the percussive action of the rammer to free the stuck pipe. The rammer is attached to the back of the pipe string. The dynamic energy of the rammer is transferred down the pipe string to the lead end of the pipe. In many cases the dynamic energy generated by the rammer is enough to free the stuck pipe and get it moving again. Sometimes it takes just a matter of minutes.”

The 24-inch diameter rammer was connected to the end of the 40-inch diameter pipe string through a series of segmented ram cones. Once the connection was complete the rammer was started and the HDD assist was underway. Daigle said, “It was probably about 10 minutes after tapping on the pipe with the rammer that it became dislodged and we were able to pullback the remaining 700 feet without trouble.”

According to Hunter, everyone associated with the project was pleased with the results. He said, “The timing of everything really worked out. The Sunland Construction crews are excellent to work with. And ultimately they got their project completed on time. Having the rammer ready to go certainly helped out.”

Daigle said, “Having the rammer available for an HDD assist on risky projects is basically an insurance policy. At least that’s the way I view it. That’s why I pre-ordered it for this one. I didn’t mind spending the extra dollars to have it on site. Having it on site meant that we avoided having to wait through several days of shipping and set up. I was actually able to accomplish what I needed to accomplish on time, rather than having the entire job shut down for three days waiting for the tool to arrive. It was well worth it.”