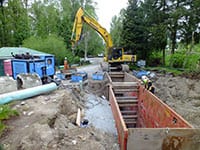 The ability to upsize or increase the diameter of the host pipe is one of the most significant capabilities of trenchless pipe bursting.  For the Maple Ridge project, static pipe bursting was used to replace an undersized gravity sanitary sewer.  The city’s south slope interceptor sanitary sewer runs along the riverfront area of Kanaka Creek Regional Park. With new residential developments and growth in the area, the sanitary sewer required major upsizing in order to keep pace.  Because the sanitary sewer runs through an environmentally sensitive area, open cut replacement was not feasible.

The city of Maple Ridge is considered part of the Metro Vancouver area.  Located 30 miles east of Vancouver, the city has a population of approximately 83,000.  In order to bring the city’s sanitary sewer inceptor in line with existing and projected growth, the project would require upsizing the existing 15-inch PVC pipe.  One section would require a 3 nominal pipe size increase or a 33% upsize and the other 9 nominal pipe sizes or 127%.

During the preliminary design phase, the city contacted several pipe bursting firms and solicited feedback on the feasibility of this major upsize through pipe bursting. The response was clear.  The project could be completed successfully, but only by an experienced pipe bursting contractor with the means and resources to undertake a project and a contingency plan, just in case.  PW Trenchless was the ideal choice the project.

According to PW Trenchless Construction President David O’Sullivan, they are very familiar with the conditions in Maple Ridge.  He said, “In 2014 we did a smaller upsize from 15 inches to 20 inches about a block away from this new project and that gave the city some confidence to further explore the potential for larger pipe upsize. This, however, was a more significant upsize, with four sections of 15 to 28 inches and three sections of 15 to 34 inches.”

According to Pipe Bursting Specialist Mike Schwager from TT Technologies, an upsize of this nature requires careful consideration.  He said, “Upsizing to these levels requires a lot of planning.  You need to look closely at soil conditions, peripheral utilities, as well as surface conditions and obstacles.  There are many things that go into making a project like this successful, but PW Trenchless has a lot of experience with challenging pipe bursts, especially in this area.  This job was really a progression as PW Trenchless had completed several successful upsizes with several different sized bursting units in the years leading up to this project.  This one, however, would necessitate much larger static bursting equipment than the preceding projects.” 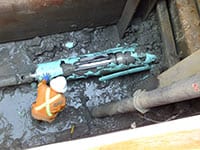 The bursting of the existing PVC sewer was done for capacity reasons in the fast growing area near Vancouver. A special expander configuration was used to facilitate the significant upsizes.

Schwager said, “The static pipe bursting market is really thriving right now.  A lot of that has to do with the rental market and being able get the equipment in the hands of contractors at a pace and rate that makes sense for the types of projects they have and from a timing standpoint.  The same is true with self-performing municipalities.  With an approachable learning curve and the availability for rental options, those municipalities are able to build very effective in-house programs with static bursting equipment.

“In terms of the PW Trenchless project for the city of Maple Ridge, static pipe bursting is also the right equipment selection for the types of soil conditions that are encountered in that part of the world.”

A survey of the ground conditions revealed that the first 15 feet contained well graded, fill-sand and some gravel with occasional cobbles, but was primarily dry.  From 15 to 20 feet there was medium to coarse fill-sand with some rounded gravel and occasional cobbles.  The condition was a little wetter.  The existing pipe depth ranged between 9 and 20 feet deep and with minimal grade (0.02 to 0.1%).

The western end of the project was close to Kanaka Creek.  A large amount of rain that spring had raised the water level significantly where the creek meets the Fraser River.  Because that was less than 330 feet away from the lowest manhole on the project, all means possible were utilized to protect the waterway.  It was decided that the upper portion of the project would be completed first and bursting runs closer to creek would be scheduled for later in the summer, in anticipation of lower water levels.

The bursting was divided into seven runs averaging 350 feet each, a total of 2,456 feet.  The design required the replacement of the existing 15-inch PVC pipe with 3 sections of 34-inch DR 17 HDPE and 4 sections of 28-inch DR 17 HDPE. Maintaining the grade of the pipe was critical and with such a major upsize ground heaving was also a concern.

The existing manholes were 41 inches in diameter and because of the large upsize, they had to be replaced with four 47 inches and three 53 inches manholes. The launch and exit pits were excavated at the manhole locations to help facilitate removal and replacement of the existing manholes after pipe bursting was completed. 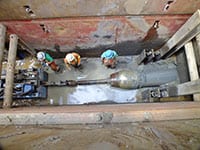 Launch and exit pits were between 10 and 15 feet deep and up to 60 feet long.  Crews exposed the sanitary service connections in order to be ready for re-connection to the new pipe.  All other adjacent services (water, gas) were also exposed before pipe bursting.  Prior to each pull the HDPE pipe was fused onsite and equipped with to a special bursting head assembly.

O’Sullivan explained, “We used a three expander bursting head assembly for this project.  It’s a unique approach.  The three expanders increased incrementally in diameter. This triple expander configuration provided a staged movement of the soil, allowing it time to relax before the next expansion came along.”

In addition, the PW Trenchless crews used lubrication to reduce the ground friction. PW Trenchless pumped a mixture of Bentonite and polymer through one pre-fused pipe.

During pipe bursting there was some heaving in the exposed service pits, however, there was no heaving on the ground surface, just some cracks along two sections of 34-inch pipe. Crews installed new inspection chambers for the re-connected services and all of the newly installed manholes in Kanaka Creek Park were sealed for odor control. The pit locations were restored and seeded.

O’Sullivan said, “The project was completed successfully with no disturbance to existing utilities. The CCTV post pipe bursting confirmed a successful installation.  Bursting times ranged between 3 to 4 hours per run, while removing the different cones took 6 to 8 hours of operation.  Set up and break down was completed over several days.”

Schwager said, “This was a well executed project.  David and his team really did a nice job and the city developed a really solid plan.  Great example of cooperation between all parties.”