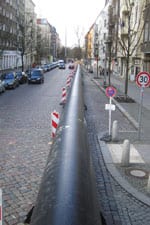 The host pipe ran under a street in a residential area. Numerous restaurants and shops are located in the neighborhood, so an open trench method would have been extremely disruptive. In order to avoid the disruption and wide range closures, the Berlin Waterworks intend to pull in a PE-liner in two sections into the old pipe without any annular space using the cold swage line application. This process is in accordance with the local water regulations.

The Pfeiffer Company often uses the cold swage line-method for projects like this. During this process a PE-Inliner is pulled into the old pipe within the diameter of the existing host pipe without the use of any heat and in a reduced size. This way the pipes from ND 100 up to ND 1200 (4 to 50 in.) with installation lengths of up to 1000 m (3300 ft.) can be restored utilizing this method.

The Pfeiffer Company has a good deal of experience with static pipe bursting, specifically with the Grundoburst static pipe bursting system from trenchless equipment manufacturer TT Technologies, Aurora, Ill, USA (a subsidiary of Tracto-Technik, Lennestadt, Germany). According to TT Technologies product specialist Collins Orton, while the Grundoburst unit is designed for static pipe bursting, it is also very effective for other trenchless applications. He said, “Static bursting systems can be used for these types of applications. In essence, the processes are very similar. In a swage line or even a slipline situation, however, there is no need to burst the host pipe. But each method does require the pulling in of a new product pipe and that’s where the similarities lie. And that’s why static bursting units can be used in all three scenarios.” 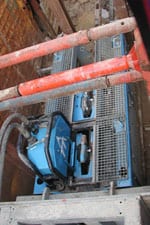 The Pfeiffer Company utilized a Grundoburst 2500G static bursting
unit to complete the swage line. The Grundoburst unit provided the power needed for the project and took up less space than a comparable winch system.

At the jobsite in Berlin the Pfeiffer Company used the largest static pipe bursting unit available, the Grundoburst 2500G from TT Technologies.

During a typical static bursting process, a hydraulically powered bursting unit pulls specially designed bladed rollers are pulled through an existing line. As the bladed rollers are pulled through, they split the host pipe. An expander attached to the rollers forces the fragmented pipe into the surround soil while simultaneously pulling in the new pipe. For the swage line project in Berlin, the hydraulic bursting unit would be used to pull the swaged pipe into place. A very large bursting unit would be needed.

Orton said, “In this particular case the contractor chose to use the bursting unit instead of a winch because of the space limitations of the project. The Grundoburst 2500G provides up to 2550 kN (650,000 lbs) of pullback, enough to meet the requirements of the cold swage line method and still take up less space than a comparable winch system. Looking at it logistically, it is easier to move the bursting machine than a comparable winch.”

The construction work in Berlin was divided into two sections. Crews dug a launch pit near the middle of the run, creating a run of 322 meters (1050 ft.) in on direction and a run of 216 meters (700 ft.) in the other. After a high-pressure cleaning process of the existing pipe, where all loose particles are removed, a camera inspection was performed. Build up within the pipe was removed mechanically with a scratching tool. For swage-lining a metallic smooth surface is not necessary, but any possible obstacles within the old pipe should be removed.

According to Orton, as crews fused together the necessary lengths of HDPE, the inner and the outer welding beads were removed from the pipe. He said, “The exterior and interior weld beads are removed to allow the PE pipe to pass through the reduction die without getting stuck. Removal of the exterior bead is done with a special skiving knife that removes the bead in a matter of seconds. The internal bead is removed with a tool similar to the bead trimmer commonly found in the US. This tool reaches back into the pipe just after the fusion weld is cooled and deploys a cutter and spacing gauge that then are rotated from the end of the pipe. The rotation carves the bead off. This procedure takes a few minutes per joint.” 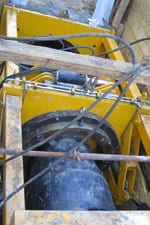 The existing ND 1000 (39-in.) steel line with ND 1030 (40.5-inch) HDPE 100. During the swage line process, the HDPE product pipe is pulled through a reducing dye to enable it to fit inside of the host pipe. Once inside, the HDPE attempts to return to its original size forming a tight fit within the host pipe.

A pulling head was welded to the front the first section of pipe to be installed. Crews positioned the Grundoburst in the launch pit and rodded the first section of pipe with the Quicklock bursting rods. Once at the launch pit, the connection was made between the Quicklock rods and the product pipe. Once established, crews began the swage lining process. The static bursting unit pulled the HDPE through the reduction tool and the swage lining die, in order to reduce the pipe’s diameter. Crews monitored the pulling force constantly to make sure it stayed within the permissible limits for the PE-pipe. To keep the friction losses as low as possible, environmental friendly anti-seize fluids are applied. The pipe then continued on into the host pipe until fully installed.

Once the first section was in place, the bursting unit was rotated 180 degrees and crews set to work on the next section, utilizing the same launch pit.

Orton said, “A strong steady pulling force is exerted to pull the entire length of pipe to be replaced through a reducing die setup. The die is tapered and will accept the O.D. of the new PE pipe, it then continues through a funnel shaped die that continues to reduce the diameter of the PE pipe to a predetermined diameter, approximately 10 percent smaller than the I.D. of the host pipe. The process can be interrupted at any time, for example to butt-weld pre-fabricated pipe lengths together. The deformation and installation speed with this dimension is between 50 and 100 m (170 to 330 ft.) per hour, therefore pipe lengths from 300 to 600 m (1000 to 2000 ft.) lengths can be pulled in, without any problem, in one day’s work.”

After both pipe sections were successfully pulled in, pre-welded sockets with flanges were welded to each end of each pipe length to complete the installation. After assembly of the end flange a pressure check was carried out, as well as a final camera inspection.

The new PE-liner has the quality of a new pipe after the installation and can carry all loads from the ground and traffic, as well as the internal pressure without effects by the old pipe. Due to the very good hydraulic characteristics of the HDPE-pipe further flow reduction is not expected.

With A Little Help From My Friends: Sunland Construction Completes Large Diameter...
Scroll to top