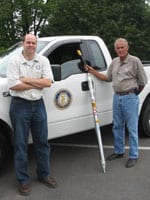 A plaque with the phrase “Make It Happen” sits on everyone’s desk at Team Construction, LLC, Nashville, Tenn. That phrase sums up an inherent quality and attitude that is helping the utility contractor quickly become one of the most respected and relied upon construction companies in the region, especially in the gas industry.

One of the key pieces of equipment in the company’s arsenal is the piercing tool. According to Team Construction President Donnie Mingus, the tool is an important part of daily operations. He said, “We use pneumatic piercing tools for a wide range of applications. For our gas service line installations we’re using them all the time. Piercing tools are what the crews get because I believe in the tools. From an efficiency and cost effectiveness standpoint, they’re the way to go.”

According to Stacy Lynn, piercing tool specialist from trenchless equipment manufacturer TT Technologies, Aurora, IL, Team Construction really gets the most out of their piercing tools. He said, “Crews at Team are utilizing their Grundomat piercing tools to the utmost. Those tools are in the field day in and day out performing bore after bore. The piercing tool has unquestionably helped make them one of the most respected utility contractors in the area.”

The Team Construction crew used a 5 3/4-inch Grundomat P-145 with a ramming adapter to pipe ram a 50-foot steel casing under a state highway. The casing was then removed and a new 6-inch steel gas main was pushed into place. The ramming application is one of many the piercing tool is capable of.

With over 25 years in the utility construction industry, Mingus has a very keen insight into the business and strong philosophy on work. He said, “I’m not big on resumes, show me what you can do, don’t tell me. One of our mottos is we don’t turn any job down. We take on anything. Some people want to shy away from the tough jobs, but that’s where we build our reputation.”

Specializing in gas distribution work, Team Construction utilizes a combination of open cut and trenchless methods for their work. Mingus estimates that 30 percent of the work the company does is trenchless, a difficult task considering the area’s soil conditions. Solid bedrock and boulder filled clay soils preclude many trenchless options in the Team Construction territory that includes Tennessee and Kentucky.

According to Mingus, much of the work they are seeing from gas providers is growth related. He said, “In the Nashville area we’re getting the hardest portion of the gas system renewal programs. They’ve saved the toughest projects for last. My guess is there is about a year and a half to two years left of the major cast iron renewal. Bare steel work will continue after that. But the growth of Nashville itself has been the biggest contributor to gas related projects because it not only includes new installations, it has everything to do with the relocation work too. The growth hasn’t stopped in this part of the country.” The diversity of work and soil conditions in Team Construction’s service area put their piercing tools to the test.

One of the biggest factors in terms of piercing tool success is accuracy. Lynn said, “When it comes to piercing tools, accuracy separates tools from toys. If you don’t have absolute confidence that your tool is going to make it to the end of the bore on target, it makes it difficult to continue to use that method. While the Grundomat [piercing tool] basically works on the same principles found in the first piercing tools, the major improvement comes in the reciprocating head. A piston inside of a casing generates power. The piston drives the tool, and air drives the piston. Today’s conventional piercing tools, as well as the Grundomat, operate in this fashion.

“The chisel-head assembly of the Grundomat, however, is spring-loaded and pushes forward from the main casing at a rate of approximately 9 times per second. This creates a pilot bore for the rest of the tool body to follow and helps the tool maintain accuracy. The chisel action and stepped-cone design allow the tool to power through difficult soils and obstructions without being pushed off course. This ultimately leads to greater bore accuracy over conventional tools.”

Mingus has four eight-man crews working for various natural gas providers renewing old cast iron gas mains. Other crews are working on new service installations, main replacement, leak repair and conversion work. Piercing tools play a large role in that work. Mingus said, “Someone is using one, somewhere, everyday. We use them for bores as big as 8 inches. And we’ve used them to push pipe, extraction. And of course we use them for boring and installing new services.” The capabilities of the piercing tool give Team Construction a trenchless option for a wide range of situations.

While a majority of the piercing tool work Team Construction does is boring, the tool can also be configured for various other applications including pipe ramming and pipe bursting. Lynn explained, “For new installations, the tool can pull in the new pipe during boring by utilizing a pipe pulling adapter. The new pipe can also be pulled in after the bore by attaching it to the air hose and pulling it into place after the bore.

“There are attachments that make the tool even more versatile. You can add an expander and use them for bursting or add a ram cone and the tool becomes a pipe rammer. Pipe extraction adds another dimension. During extraction you have two objectives: one, remove the existing service and two, install the new one. A pipe-pushing adapter is connected to the front of the Grundomat. The tool is used to drive the existing service out while pulling in the new service. This method is usually used for small diameter gas or water services.”

According to Lynn, the project started out as a standard horizontal bore. He said, “Initially the Team crew wanted to complete a bore under the road with a 5 3/4-inch Grundomat equipped with an 8-inch expander. Ground cover, however, was minimal and displacing that amount of soil at a depth of only 4 feet created the potential of heaving in the road. After looking at the project, we decided we would be better off using the piercing tool as a pipe rammer and ramming a bore pipe casing under the roadway, removing it and placing the clean pipe in its place. By ramming we could create the bore under the road without the fear of heaving or slumping.”

The crew set to work preparing a launch pit on one side of the road and an exit pit on the other. The 50-foot casing was fitted with a 6-inch cutting shoe on the lead end and a soil port was cut on the back end to allow spoil to exit during ramming. The 5 3/4-inchGrundomat P-145 was equipped with a tapered ram cone and a connection to the casing was made through a series of segmented ram cones.

Once preparation was complete, ramming was underway. The casing arrived on target, at the exit pit in approximately one hour. The Team Construction crew then removed the cutting shoe and detached the piercing tool. A backhoe was used to remove the bore pipe casing. Once removed, the crew used the backhoe to push the new 6-inch steel gas main in place.

Mingus and everyone involved were pleased with the results of the project. He said he anticipates more challenging applications in the future and plenty of work to keep his piercing tools busy. 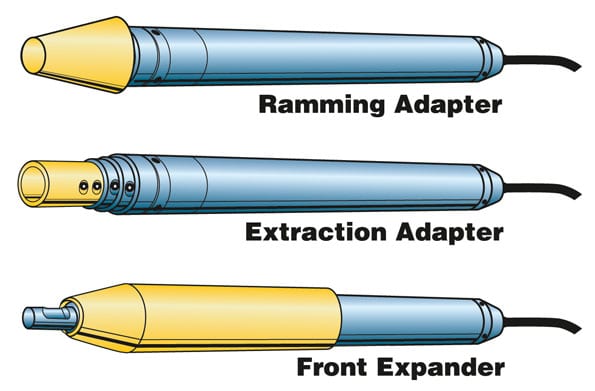 Various adapters and attachments are available that make the piercing tool one of the most versatile and productive pieces of trenchless equipment.