Certainly not the oldest of the trenchless methods, directional drilling is arguably the best known and celebrated. The method has transcended the utility construction arena and gained the attention, to an extent, of the general population. That fact alone speaks volumes about the method’s capabilities and its impact in the construction world.

One large reason for directional drilling’s fame is its inherent capabilities. Massive river crossings, high profile locations and large diameter projects have created an almost modern myth. The other component is innovation. Ever innovators, drill operators and manufacturers are finding new and creative ways of tackling tough projects and difficult situations.

Recently, trenchless equipment manufacturer TT Technologies, Aurora, IL introduced several pipe ramming techniques that are helping drill operators solve drilling problems and tackle tough conditions. The techniques are being heralded throughout the industry and are changing the way drillers approach projects and respond to problems on the job.

The concept behind removing a stuck product pipe (bore salvage) and removing stuck drill stems (drill stem recovery) are simple yet highly effective. During a bore salvage the pipe rammer is attached to the end of the partially installed product pipe. The pipe rammer needs to be attached to the pipe so that it pulls the pipe from the ground. This can be accomplished through a fabricated sleeve. A winch or some type of pulling device is used to assist the rammer during operation. In many cases, the percussive power of the pipe rammer is enough to free the stuck pipe and allow it to be removed from the ground.

Bore Salvage
Specially configured, the Grundoram can help remove a product pipe if a bore fails. This allows the contractor to correct the original problem and attempt the bore again.

Orton said, “In these situations typically the contractor has run out of options and is looking to salvage the project. As most know, drill stems can be very expensive, so leaving them stuck in the ground is not desired. Product pipe, obviously, is very expensive as well. The last thing anyone wants to do is leave it in the ground as an incomplete bore. Plus, by removing it, the contractor now has the opportunity correct the original problem and bore again.”

Drill Stem Recovery The percussive force of the Grundoram can free stuck drill stems by either removing them from the ground or pushing on them while the drill rig pulls.

The pullback assist method works directly on getting the product pipe installed. Drilling underwater or in loose flowing soil conditions a condition known as hydrolock can occur. Orton said, “Hydrolock is a situation were the external pressure being put on the product pipe from ground water pressure, drilling fluid pressure and/or soil conditions exceeds the drill rig’s pullback capability or the product pipe’s tensile strength. The percussive action of a pipe rammer in this situation can help free the immobilized pipe.”

The pullback assist technique has been successfully used on steel pipe, as well as HDPE. The technique can be used as a safety measure in anticipation of hydrolock problems or after the pipe has become immobilized (See Diagram C). According to Orton, time is a key factor with any of these methods. He said, “Reaction time is always important. Not hesitating to mobilize needed equipment and expertise in these situations can really make the difference between success and failure. Success rates improve dramatically depending upon how quickly problems are responded to. In fact, a number of drilling contractors are starting bring ramming equipment to directional drilling sites as a form of insurance in case problems develop.”

During the Conductor Barrel process, casings are rammed into the ground, at a predetermined angle, until desirable soil conditions are met. The spoil is removed from the casing with an auger or core barrel. Drilling proceeds within the casing in the desirable soil conditions. In addition to assisting drilling operations at the start, the conductor can also serve as a friction-free section during pullback (See Diagram D).

The Vancouver, WA project called for the installation of a 12-inch steel conduit, 5,500 feet, under the Columbia River. Poor soil conditions at the start prompted Cherrington Corporation to utilize a pneumatic pipe rammer to install a Conductor Barrel.

The project in Vancouver called for the installation of a 12-inch steel conduit, approximately 5,500 feet under the Columbia River to a point just west of Portland, OR. Once installed, the conduit would house 14 smaller, PE fiber-optic cable conduits.

Once on site, Cherrington Operations Manager, Mark Parsons knew drilling would be difficult. According to Parsons, the soil conditions at the start of the project were not conducive to drilling operations. He said, “The soils that we encountered in the beginning were unconsolidated cobbles and boulders and basically not drillable. Because of the unconsolidated nature of the formation, maintaining the bore-hole trajectory was not possible due to a lack of bore-hole integrity. We tried several different methods to successfully penetrate and steer through the formation. In this industry, we are all eternal optimists. We like to think that the next foot is going to be better drilling.” The soil conditions did not improve and Parsons was forced to re-evaluate the situation.

The Cherrington crew used the 18-inch diameter Grundoram pipe rammer to install 30-inch and 24-inch casings to a depth of 325 feet. Spoil was cleaned and the crew was able to successfully complete the bore.

After discussions with the client, it was decided that the only way to get through this formation was to use the Conductor Barrel™ technique. TT Technologies Product Specialist Collins Orton was contacted to arrange delivery of a pneumatic pipe rammer for a Conductor Barrel installation. Orton delivered an 18-inch diameter GrundoramGoliath and equipment for ramming a 24-inch and 30-inch diameter conductors. Crews began ramming a 30-inch diameter lead casing at a 16.5-degree angle. Parsons explained that the angel of the bore had to be altered from the original drilling angle in order for the conductor barrel to reach the drillable formation quickly. More sections of the 30-inch casing were added and ramming continued until the conductor barrel reached 156-ft mark.

At this point, they met resistance and the decision was made to ram a smaller casing inside of the 30-inch casing. Crews removed the spoil from the 30-inch casing with an auger and a core barrel. Once spoil was removed, the crew set up for ramming 40-foot long, 24-inch diameter casings inside of the original casing. Over the course of the next several days, crews welded and rammed the 24-inch diameter casing sections to a depth of 325 feet. At 325 feet, the Cherrington crew removed more spoils from the casings and then installed a 10 3/4-inch wash-over casing for centralization of the drill pipe. The conductor barrel actually created an unobstructed raceway through the unconsolidated cobbles and boulders and to the drillable formation.

After reaching the drillable formation, the Cherrington crew was able to complete a 5,500-foot pilot bore-hole under the river. After removing the 10 3/4-inch wash-over pipe, the crew forward reamed and ultimately pulled back the 12-inch steel conduit successfully. Parsons said, “We’ve been forced to use the Conductor Barrel technique in the past where nothing else would work and I’m sure we’ll use it again in the future if circumstances warrant. It’s a viable option when confronted with impossible drilling conditions.” 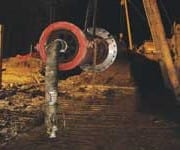