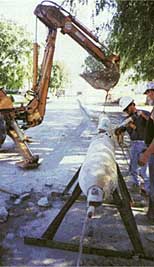 Replacing a failed sewer system is a big job and expense for any municipality. This was especially true for the some four hundred citizens of Mansfield, WA, as they were faced with replacing their entire sewer system.

Installed in 1952, the old concrete pipe sewer was now crumbling beneath them. “We had some unreal flows and knew we had an infiltration problem,” said Mansfield City Superintendent John Cavadini.

To get a better idea of the degree of deterioration, the engineering firm brought in a specialist to “TV” the lines. Although the video service didn’t have a camera for the six-inch lines, the eight- and ten-inch sewers showed considerable decay and tree root infiltration. This information was key to obtaining federal moneys for a new system.

Because of the incredible impact that this project would place on this tiny farm community, the engineering firm recommended allowing alternative forms of renovation (other than trench and replace) to be allowed when it went to statewide bidding. Hammond, Collier ” Wade-Livingstone had previously recommended pipe bursting in a similar situation, with a positive outcome. Base don the engineering firms estimate, funding was secured from the Community Development Block Grant Program and the USDA in the form of a grant and low interest loan.

Bid requests were let to replace 13,000 feet of the most critical lines, which constituted approximately 70 percent of the town’s sewer lines. Seven firms responded, one of which incorporated the alternative method of pneumatic pipe bursting as part of their estimate. The contractors was Pape ” Sons, headquartered in Seattle, WA. Their bid was ultimately accepted for several reasons.

“One of the reasons we chose [the} pipe bursting [bid] was because of all the restoration problems involved in tearing-up streets in open cut,” cited Cavadini. As stated earlier, the city had gone through the surgery of open cut for the installation of water lines several years ago, and Cavadini expressed, “We didn’t want to go through that again.

The other main reason for the pneumatic pipe bursting bid to be awarded was due to economics. It came in at $210,000 less than the average open-cut bud. Don Phelps, Branch Manager of Hammond, Collier ” Wade-Livingstone, said, “You can expect 10 to 20 percent savings with pipe bursting over open cut.” Phelps indicated that the typical open cut jobs costs about $50-55 per foot, whereas bursting comes in around $40 per foot.

This considerable savings allowed the community to let a second contract and change order for an additional 5,000 feet of sewer line (for a total of 18,000 feet). This additional footage included the line running out of town to the wastewater treatment lagoon. Once again, Pape ” Sons secured the low bid by incorporating pipe bursting.

Two years ago, Dick Harrod of Pape ” Sons had started looking for economical alternatives to the standard open cut scenario because of the increasingly leaner and meaner bidding processes. In his quest, he became familiar with the trenchless technology of pipe bursting through several sources. After careful review and observation, Harrod was convinced. Based on his recommendations, Pape ” Sons made an initial investment in this new technology several years ago. Now, Harrod is considered a veteran, having supervised several bursting jobs in the Pacific Northwest, including a recent one at McChord Air Force Base in Tacoma, WA.

Harrod arrived in Mansfield in mid-August with two crews of men and two pneumatic bursting tools. The two tools were aGrundocrack PCZ-180 for bursting the smaller diameter pipe, and a Grundocrack Hercules for the larger. The tools were selected based on their pneumatic power and, most importantly, their diameters and suitable available expanders. Both tools were obtained through TT Technologies, a manufacturer of trenchless tools and accessories in Aurora, IL.

The soil conditions in Mansfield are not conducive to digging or trenching. The dense and rocky ground consistency is a result of ancient volcanic activity. But, since the pipe bursting tools would be following pre-established routes, the difficult soil was not a factor.

The total of 18,009 feet of bursting broke down into three categories: 4,756 feet of 10-inch concrete was replaced with 10-inch HDPE pipe; 10,128 feet of eight-inch concrete was converted to eight-inch HDPE pipe; and 3,123 feet of six-inch concrete was upgraded to eight-inch HDPE pipe. The high density polyethylene pipe was selected for its unique flexural qualities that allows great lengths of pipe to be simultaneously pulled into ground as the tool bursts the failed line. HDPE also has an indefinite service life, meaning it will probably never need to be replaced. The HDPE pipe for the Mansfield job was specified as SDR 21 with the interior of the pipe having “a light reflective color to allow easier/better viewing for television inspection.” All HDPE pipe was provided by Maskel-Robbins of Seattle, WA.

Harrod utilized two crews, each of which was equipped with one of the Grundocrack tools, depending on the run’s characteristics. Runs averaged 350 feet, with some as long as 500 feet. Typically, the runs were from manhole to manhole with several lateral service connections made along the line. An entry pit would be prepared to access the failed pipe and receive a winch line, which would be fished back from the tool exit area several hundred feet away. The tool, with appropriate expander for the burst, would then be attached to the winch line, and launched from the entry pit.

Developed to complement the bursting tools, Harrod incorporated two Grundowinch trailer mounted winches. The Grundowinch is a self-contained unit that can be easily positioned above a manhole or opening. An extension boom adjusts for pipe bursting in a variety of pipe depths.

The combined effect of the percussive pneumatic power of the tool, coupled with constant tension supplied by a hydraulic winch, propelled the tool and new pipe through the old line. Once the line was in, lateral connections were made.

Reflecting back on the job, Harrod stated that he would approach the job differently if he were to do it again. “I’d still use two crews, with one performing a burst and the second attending to the manholes and laterals.”

Most of the runs were away from main thoroughfares, following alley ways. “The pipe bursting process works especially well in tight areas,” stated Eric Smith, who was the engineer for Hammond, Collier ” Wade-Livingstone.

Expanders played a key role in the Mansfield job, as they do in most every burst. Primarily, an expander pushes old pipe fragments and soil out of the way for the safe installation of the new pipe. In instances where a larger diameter pipe is desired (as opposed to what is currently in the ground), the expander produces a wider bore to accommodate the installation of the larger pipe. This was the situation when crews were replacing six-inch concrete pipe with eight-inch HDPE.

Crews used a Grundocrack PCZ-180 (with a seven-inch diameter), fitted with a 10-inch rear expander to provide ample room for new eight-inch pipe. The tools air consumption is 175 cfm and operates at 100 psi. The rear expander attached to the back of the tool, with the HDPE pipe threaded inside of it.

The larger Hercules tool has a diameter of 8 1/2-inches with an air consumption of 280 cfm. To burst the 10-inch concrete pipe, the Hercules was fitted with a full (12-inch diameter) body expander. The full body expander is like the housing of a ball-point pen, allowing only the front tip of the bursting tool to be exposed for attachment to the winch line.

Pipe bursting accessories important for the success at the Mansfield site included an in-line lubricator, which provided adjustable lubrication to the tool. This lubrication was dispensed through the air line to the inside of the tool to reduce friction between the single piston and cylinder. Another important accessory was the shock valve. This device allows the proper amount of pneumatic pressure to build-up in the air line before the tool is engaged in the burst. This meant that only full power was supplied to the tool, guaranteeing now weak starts. This is especially beneficial when long air lines are required.

By the end of November, the last of the 53 runs were completed. The project wasn’t intended to last three and one-half months, but the crews got off to a slow start. “It started very slow. We had difficulties with support equipment breaking down, as well as illness with some of the crew,” said Harrod.

Further slowdowns resulted from locating each lateral connection. The infiltration into the old pipe had disguised some laterals from the video camera. And, as stated earlier, the six-inch pipe was not televised, so crews had to guess as to where each lateral might be located on those lines. In all, there were 166 lateral connections made.

The crews also replaced or restored 57 manholes throughout the community.

With the arrival of winter, it was decided that final rehabilitation work will need to wait until spring to be completed. The good news for Mansfield is that all sewer services are up and operational. Not only that, but they got a lot more new sewer for their money. Commenting on the scope or the job, TT Technologies Pipe Cracking Product Specialist Mike Schwager said, “It is one of the single largest sewer rehabilitation projects to use pipe bursting in North America.”

“All in all, it was definitely a positive situation,” according to Phelps. Cavadini agreed, stating “I’d say it went real well. The pipe is in the ground. “