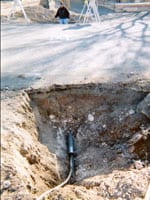 The town of Ash Fork, Arizona has experienced a recent economic revitalization. This revitalization has been attributed to quarrying operations just outside of town as well as the attractive nature of the rural lifestyle the area provides. Buildings and homes once unoccupied are being upgraded and remodeled to meet the growing housing demand. The new growth is beginning to tax the city’s aging water distribution system. In order to meet the demand system upgrades are needed.

Water service replacement projects like the one at Ash Fork are well suited for trenchless piercing tools. The piercing tool is easily one of the most versatile trenchless tools available. They have had an impact on almost every segment of utility construction. TT Technologies piercing tool specialist John Hargett said, “The gas industry, wastewater industry and the water industry have not only been proponents of trenchless technology in general, they have been great supporters of piercing tools. With standard sizes ranging between 1 3/4 inches to 7 inches in diameter there is a piecing tool available for just about any application.”

The piercing tool is commonly used for horizontal boring. However, the tool can also be configured for various other applications including pipe ramming and pipe bursting. In the case of Ash Fork, the tool was used for pipe extraction in addition to new service installation. Hargett explained, “For new installations, the tool can pull in the new pipe during boring by utilizing a pipe pulling adapter. The new pipe can also be pulled in after the bore by attaching it to the air hose and pulling it into place after the bore.

“ Pipe extraction adds another dimension. During extraction you have two objectives: one, remove the existing service and two, install the new one. This application really demonstrates the versatility of the tool. A pipe-pushing adapter is connected to the front of the Grundomat. The percussive power of the tool is used to drive the existing service out while pulling in the new service. This method is usually used for small diameter gas or water services.”

The project in Ash Fork called for the extraction of the existing 1/2-inch galvanized water service under a roadway and the installation of a new 3/4-inch polyethylene service. According to Hume the project exemplifies the happenings in Ash Fork. He said, “A person in town brought in a new modular home and requested water service. There already was service to the site, but we determined that the service was undersized and needed to be upgraded. It probably had not been in actual service for over 25 years. The Santa Fe Railroad installed the original water service for the area in the 1940s. But after the main rail line was moved and a highway bypass completed, the town saw a long period of low growth. The system was adequate for many years. Today, the new growth we’re seeing is burdening the system, so upgrades need to be made.”

To extract the 1/2-inch diameter galvanized steel water services MCWD crews used a 185-CFM air compressor and a 3 1/3-inch diameter Grundomat-P 85 equipped with a pipe-pushing adapter. As the pipe was being extracted crews pulled in a 2-inch diameter High-Density Polyethylene (HDPE) sleeve behind the tool. Hargett said, “We knew the soil would be collapsing as we extracted the existing service so we decided to pull in a sleeve behind the tool. That way the new service could be inserted easily after the extraction was complete.” After the sleeve was installed, a new 3/4-inch HDPE service was inserted into the sleeve.

Hume was pleased with the results of the trenchless project. He said, “The cost and time it would have taken to open cut the road would have been significant. We would have been cutting out about 1/2-inch or 3/4-inch thick asphalt but the restrictions make us put back in slurry and 4 inches of asphalt. So it’s better not to disturb it. From start to finish the entire project took approximately 1 1/2 hours.

A New Record Ram! Miller The Driller Tops Them All!