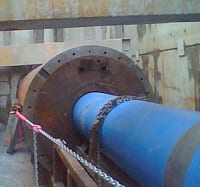 Marathon Drilling, Greely, Ontario, CA, is leading the way for trenchless technology in Canada as well as North America. The company was formed in 1981 to serve the needs of the oil and gas pipeline industry, specifically drilling services, in Eastern Canada. The first trenchless service offerings were added a few years later in 1984.

It Takes A Contractor

On a whole, the growth of trenchless in North America has been remarkable over the last several decades, but it has taken a commitment to education by trenchless contractors and equipment manufactures to establish the technology in the first place and then grow it. Marathon Drilling is a primary example of a contractor that has made the investment and effort to bring trenchless to the forefront of the construction industry.

McPhedran said, “We have been a real advocate of trenchless technology. We’re out there every single day, looking at conventional construction designs and trying to change them, modify them with trenchless solutions, to get them approved. If we see a road crossing that may be open-cut or a creek crossing project designed using non-trenchless or conventional technologies, we try to have it changed. We try to promote the industry and promote education and exposure to it. So I think our role, very much like all the other trenchless technology companies that exist, has been to be real pioneers of change, bringing on new solutions.

“Trenchless technology is so contrary to the old way of thinking. It is a technology that really is new in North America when considering the growth of trenchless technology being so great in just the last 20 years. We are contrary to everyone’s belief and everyone’s first approach or thought process when it comes to constructing something. We are forced to be out there pushing it. We’re forced to be out there really going over the top doing a sales job to get people to at least consider it and allow it. In many cases it’s an uphill battle. You can show people technology. You can prove to them with case studies that the technology has been proven elsewhere. But to force their hand to ink and have them put their name on it is very difficult.”

For Marathon Drilling, however, that effort has paid off. Considered one of the leading trenchless contractors in Canada, the company continues to expand the reach of trenchless. One trenchless method in particular that Marathon Drilling employs regularly is pneumatic pipe ramming.

As Versatile As A Hammer: Pipe Ramming

Trenchless pipe installation through ramming is a basic process. A pneumatic hammer is attached to the rear of the casing or pipe. The ramming tool, which is basically an encased piston, drives the pipe through the ground with repeated percussive blows. A cutting shoe is sometimes welded to the front of the lead casing to help reduce friction and cut through the soil. Bentonite or polymer lubrication can also be used to help reduce friction during ramming operations.

According to pipe ramming specialist Rick Melvin from trenchless equipment manufacturer TT Technologies, Aurora, Ill., several options are available for ramming various lengths of pipe. He said, “While pipe ramming may be a simple process, just like a hammer, a pipe rammer is very versatile and effective. You can install an entire length of pipe at once. For longer runs, one section at a time can be installed. In that case, the ramming tool is removed after each section is in place and a new section is welded onto the end of the newly installed section. Depending on the size of the installation, spoil from inside the casing can be removed with compressed air, water, an auguring system or other types of earthmoving equipment. 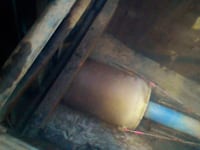 Ramming requires minimal working depths and can be used for horizontal, vertical, and angled applications. Ramming is also ideal for installations under roads and rail lines because it displaces the soil without creating voids or slumps. While some methods have trouble with rock or boulder-filled soils, pipe ramming can accommodate boulders and rocks as large as the casing itself during the process. That spoil can be removed after the installation is complete.

Slick-boring limits the amount of stress placed on the product pipe, which is of concern to project owners. The bore pipe ultimately takes the brunt of impact from the ramming in tough soil conditions and spoil clean out.

Typically, crews have a sufficient amount of room on either side of road or rail crossing to facilitate ramming and slick-boring operations. This also allows them to install longer sections of pipe. But even in tighter working areas crews are still able to ram in the bore pipe section by section and install the product pipe section by section.

According to Marathon Drilling project manager Tyler Gordon, Marathon Drilling recently completed a 270-foot, 26-inch diameter slick-bore pipe ram for Union Gas. He said, “The project began as a standard jack and bore. However, because of heavy boulder obstruction, the slick-bore method was employed to complete the installation. This was very effective and product pipe was installed without issue. We have crews perform slick-bore installations on a regular basis for various pipeline projects.” 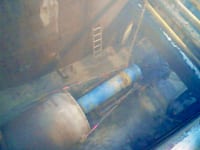 A recent pipe ram for an on-grade sewer main installation in Ottawa Ontario highlights the capability of the pipe ramming process. Marathon Drilling crews used a Grundoram Taurus from TT Technologies to install a 72-inch diameter casing, online and grade, 72 feet, under a road to accommodate a gravity sewer main. McPhedran said, “The ram was under a very busy road and under a 24-inch diameter high pressure water main. And because of the depth, we were about 25 feet deep, the ability to open cut without wiping out the entire roadway and totally disrupting traffic wasn’t possible.”

Melvin said, “Ramming tools, in general, are capable of installing 4- through 144-inch diameter pipe and steel casings. At 24 inches in diameter, the Grundoram Taurus, which Marathon is currently using, is the world’s second largest pipe rammer. The Grundoram Apollo at 32 inches in diameter is the world’s largest ramming tool. Casing diameters up to 147 inches have been successfully installed using this larger scale ramming equipment.”

Marathon drilling crews not only had to face a challenging installation, temperature on the project hovered around 30 degrees below zero. McPhedran said, “It was ugly. It was extremely cold.”

After completing pit construction, the first 10-foot section of pipe was lowered into position. The connection between the 24-inch diameter Grundoram Taurus and the 72-inch diameter casing was made using a standard 72-inch ramming gear. A 72-inch ram cone was connected to the pipe and reduced the overall diameter to 30 inches. A 24-in ram cone made the final connection to the tool. The entire configuration was secured with tensioning chains and the tool was connected to the air compressor.

Gordon said, “Ramming went smoothly and once the first section of pipe was in place, we removed the ramming tool from the casing, lowered the next 10-foot joint into the pit and welded it to the back end of the casing that we had just installed. That process continued until the entire length of casing was successfully rammed in.” Crews then set to work cleaning the spoil from the casing. According to McPhedran, some of the boulders were so large that they needed to be removed one at a time with chains and cables. After the spoil was removed, the concrete sewer main was inserted into the 72-inch diameter casing. Marathon crews built bulkheads on top of the concrete pipe to the top of the casing to hold the main in place. The space was then filled with cementitious grout.

One of the biggest factors in the future growth of trenchless is the general public and, according McPhedran, the time is ripe for trenchless. He said, “The one driving factor in the growth of trenchless technology is the overall growth of our communities, our cities. They’ve become denser, there are more roads, more homes, driveways, people, the things that make it more challenging to complete construction projects utilizing conventional excavation techniques. A big thing today is reducing the socio-economic impact on taxpayers. They don’t want the road ripped up. It delays them from getting things done during the course of a day. It affects business, and business today can’t afford lost or down time. It’s never made up again. So they don’t want that road detoured or that highway delayed.

“So, with technology that has been proven, like the pipe ramming equipment that TT [Technologies] provides, the taxpayers are saying, ‘If the technology is available, even if there is a greater upfront cost, the overall costs in the end will be less because business can remain in motion.”