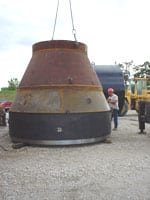 To facilitate the ramming of such an enormous casing, Miller the Driller had an inverted bell ramming adapter fabricated by Arntzen Steel, Rockford, Ill. The 147-inch reduced the overall diameter to 80 inches. An 80-inch ram cone and a 24-inch ram cone made were added to make the connection to the Grundoram Taurus.

Bike trails seem to be some of the most popular community development projects. In times when budgets are being slashed and public funds are at a premium, communities around the United States continue to invest in improving existing trail systems and creating news ones. But that doesn’t mean that cost is not a major consideration. It is. And city and county officials need to be careful and creative planners when it comes to designing these projects and determining construction methods.

A recent trail construction project in Altoona , IA. put community services director Vern Willey to the test and required some creative thinking and as well as some impressive trenchless construction by a renowned trenchless contractor.

According to Willey, the idea for the project goes back almost a decade. He said, “Back in 1995 the city got involved with a community group and one of the members of the group came up with the idea of a bike path loop through the city. Plans were developed and the ultimate goal was to tie into another trail system that would eventually become part of a 110-mile trail system. Eventually a plan of where the trail would run was drawn up. After the plan was adopted, we applied for and received a statewide enhancement grant.” The $200,000 grant was designated for purchasing an easement along the railroad right-of-way where the trail would run.

Finding the proper balance between existing areas and the new bike trail proved to be an issue that Willey needed to address. He said, “We encountered some tight locations along the railroad right-of-way. There is an industrial area there and some people didn’t want the trail right up against those areas. At one point the trail crossed the tracks with a pedestrian bridge. As we got further in the layout, we realized that in order to connect everything we would have to cross the tracks again. At grade crossings were pretty much out of the question so we knew we would have to go under the tracks.”

The name Miller The Driller, Des Moines , IA , has become synonymous with some of the most difficult utility construction projects in the United States . In the world of pipe ramming, Miller the Driller is considered a premier contractor. After the project in Altoona , Miller the Driller reached a new plateau with a world pipe ramming record.

For the project, Miller The Driller was contracted to install the 60-foot casing needed to facilitate the bike path tunnel under the rail line. The pipe ram ranks as the largest diameter pipe ram ever completed. According to vice president of operations Brandon Young, son of Miller the Driller President Kris Young and grandson of founder Gene Miller, the installation method was key to the project’s success.

Young said, “During the early stages of this design. Snyder & Associates Engineering, contacted us regarding jacking in a square concrete tunnel underneath railroad tracks for a bike tunnel. We have completed both square and round projects in the past. After looking at the site we determined that a square tunnel would not be a good choice for this project as the tracks were built on a levee. Our experience has been that levees are typically built on or with fill material that would hinder this type of trenchless application. We decided to pipe ram a round casing instead.”

In order to create a tunnel large enough to accommodate bicyclists, the steel casing would need to be very large. The 147-inch outside diameter casing ultimately used for the tunnel sets a new world record for pipe ramming diameter, besting the previous record by three inches. To complete the job, Young chose a 24-inch diameter Grundoram Taurus pneumatic pipe rammer from TT Technologies, Auror , Ill.

In preparation for ramming, the Miller the Driller crew poured a 50- by 16-foot concrete pad. The pad served as the support for ramming operations including a push sled and auger track.

According to TT Technologies pipe ramming specialist Mike Schwager, several options are available for ramming various lengths of pipe. He said, “An entire length of pipe can be installed at once or, for longer runs, one section at a time can be installed. In that case the ramming tool is removed after each section is in place and a new section is welded on to the end of the newly installed section. The ramming tool is connected to the new section and ramming continues. Depending on the size of the installation, spoil from inside the casing can be removed with compressed air, water, an auguring system or other types of earthmoving equipment.”

Ramming tools, in general, are capable of installing 4- through 122-inch diameter pipe and steel casings. At 24 inches in diameter, the Grundoram Taurus is the world’s second largest pipe rammer. The Grundoram Apollo at 32 inches in diameter is the world’s largest ramming tool. Until the Miller the Driller project in Altoona , diameters up to 144 inches had been successfully installed using large scale ramming equipment. Ramming requires minimal working depths and is proven effective for horizontal, vertical, and angled applications. Ramming is also ideal for installations under roads and rail lines because it displaces the soil without creating voids or slumps.

According to Willey, project specifications varied in the beginning of the project. He said, “With some of the requirements we saw on bike trails and clear space, we were looking at a 14-foot diameter tunnel. We approached these agencies and explained that a 14-foot tunnel just wouldn’t work in this situation. So eventually we got them to buy into the idea of a 12-foot diameter tunnel.”

Costs also had a big impact on the project design. Willey explained, “Well once we got going on the ramming idea and contacted Miller the Driller, we brainstormed and came up with what they thought they could do and what it would cost. The only problem that we had occurred after we got all of our estimates in and we thought that it’s going to work, we put the project out for bid and the bids came back substantially higher than we expected because the cost of steel had skyrocketed.

So we looked at the design. Installation costs were coming in at around $3,900 per foot. At the time we had the tunnel a little lower in the slope of the railroad right-of-way so the tunnel had to be longer. So we went back and reworked the design and raised the tunnel up a little and cut about ten feet off the total length. And that helped cut the total cost of the project.” 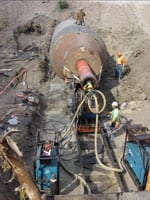 After the pit construction was finished the Miller crew assembled a driving stage for the Taurus from an auger track. The crew also utilizes a hydraulic push sled to assist with ramming operations. Young said, “We used the boring machine to push against the casing during ramming. We also used it to move the rammer back after each segment of pipe was rammed into place so the next piece of casing could be brought in.”

The pipe chosen for the project was made by Permalok, St Louis , MO. The casing was fabricated in 20-foot sections. Each 20-foot section had a wall thickness of 1.5 inches and weighed 2,330 pounds-per-foot or approximately 47,000 lbs per section. The Permalok casing incorporates a mechanical press fit design without an internal or external bell. According to Young, this was a real time saver. Schwager commented, “On a recent large diameter ram that incorporated a weld-in-place operation, a single joint took a week to weld and x-ray. Brandon said the time needed to make up one Permalok joint for the Altoona project was less than one hour.” The crew carefully lowered a 20-foot long 147-inch diameter pipe section into place and after the prep work was complete, ramming was ready to begin.

The connection between the 24-inch diameter GrundoramTaurus and the 147-inch OD diameter casing was made using a special adapter. The 147-inch inverted bell pipe adapter, rolled by Arntzen Steel, Rockford , Ill. , reduced the overall diameter to 80 inches. An 80-inch ram cone was then connected

to the adapter and further reduced the diameter to 30 inches. A 24-inch ram cone made the final connection to the tool. The entire configuration was secured with tensioning chains and the tool was connected to the air compressor.

The actual ramming went smoothly. Crews were able to install the first 20-foot section of casing without incident. The ramming tool was removed and some of the spoil was taken out of the casing. Crews then positioned the next 20-foot section of pipe in place and made the connection to the first section. The rammer was reconnected and the second section was rammed in place. The entire ram was completed on a 2.2% downhill grade. Once all of the casings were installed the Miller the Driller crew removed the remaining spoil with a skid steer loader. Almost 6,000 cubic feet of dirt was removed from the casings.

The giant casing was rammed 60 feet under Iowa Interstate Railroad tracks. The tracks remained open during the ramming operations. The casing was installed to create a tunnel under the tracks for a new bike path for the city of Altoona Iowa.

Young attributes the success of the project to several factors. He said, “The willingness of the engineers to look beyond conventional construction techniques and allow a trenchless solution to be developed was the first part of the success. The other part was the crew. They were the success. The crew was very professional and courteous at all times. I am very proud of how our team represented Miller the Driller. Our field supervisor Bill Mendenhall took hold of a concept and made a highly difficult project highly successful. Several railroads were watching this project very closely. They couldn’t believe it when we rammed the pipe through to the exit side and never disturbed the tracks.”

The community’s reaction to the project was positive as well. Willey said, “The response has been just great. There are so many people that use it. The kids, as well as adults, can access the old swimming pool, the new aquatic center, the fitness center, library, playfields, all without having to worry about crossing the railroad tracks.”

Work continues to complete the next phase of the trail project within Altoona . Several additional phases need to be completed in order to complete the 110-mile loop. Willey estimates the project is 50 to 60 percent complete. 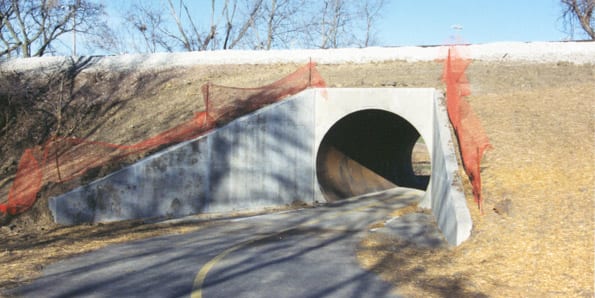