The water service installation project had been on the books for seven years before Clifford Collins and Son, Mt Vernon, KY was able to accomplish the task with a Grundomat piercing tool.

Almost every city or municipality has one, a certain job or project that remains unfinished or is not attempted, sometimes for years, because it is inherently too difficult for current technology or too great a risk for contractors. Occasionally, however, a contractor comes along with the right attitude and the right tool to make the impossible possible. Such was the case recently for utility contractor Clifford Collins and Son, Inc., MT Vernon, KY.

According to Clifford Collins and Son President, Clifford Collins, the Rockcastle County, Kentucky water service installation project had a long history. He said, “We needed to get a new water service line under three lanes of highway. It was a residential line and the homeowner had been waiting for the new service for years, but no one would attempt the project because of its level of difficulty. I told the owner I would try to help him, but if I hadn’t have gone to the Pumper show, I would have probably given up too.”

In order to avoid damage to the 1-inch HDPE service line from the limestone fill, Collins installed a 2-inch PVC sleeve first to protect the water line.

The water service installation had been on the books for seven years. The homeowner, who was limited to hauling water to a cistern, requested the service, but was relegated to waiting until an affordable and acceptable solution was presented.

According to Collins everyone that looked at the job, turned it down. While the installation of the line was approved by the utility, Western Rockcastle Water Association, open cutting the highway was not. Any installation method would need to be trenchless. The potential for problems with the road, the extremely compact and dense limestone fill under the road and the length of the installation scared most potential installers away except for Clifford Collins.

The project called for the installation of a 1-inch diameter, 80-ft long High-Density Polyethylene (HDPE) water service line under Interstate Highway 461. Collins had offered to help with the project, but was not able to find a solution until he attended the 2002 Pumper/Cleaner show in Nashville, TN.

At the show Collins approached TT Technologies Piercing Tool Specialist Mark Major about the project. Major said, “The project obviously had a high degree of difficulty, but we thought we might be able to pull it off with a Grundomat piercing tool. I followed up with Clifford a few weeks later and the project was a go.” 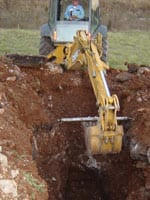 The new service line needed to be installed under a three-lane highway. The highway could not be open cut, so a trenchless option was required.

The first patent for a piercing tool design was granted in 1916. The original design called for a piston to propel the tool, and compressed air to drive the piston. Whether or not the tool was actually tested during the war is not known.

In the 1950s, interest in piercing tool technology resurfaced in Poland. During the 1960s it emerged in Russia and Germany. The earliest tools, or moles as they are often referred to, were often difficult to handle and hard to restart after stopping. Accuracy was also a problem.

Because accuracy was such a problem with most piercing tools, the technology was often thought of as unreliable and was not allowed to reach its full potential. The development of the reciprocating stepped-cone chisel-head assembly changed that in the 1970s.

Major said, “The chisel-head assembly is spring-loaded and pushes forward from the main casing at a rate of approximately 9 times per second. This creates a pilot bore and helps the Grundomat maintain accuracy. The chisel action and stepped-cone design allow the tool to power through difficult soils and obstructions without being pushed off course.”

Today, piercing tools are used in water, gas, sewer, electrical, CATV and other construction applications. Typically piercing tools range in size from as small as 3 inches in diameter up to 7 inches. Accurate bores at lengths of 50 to 150 feet, make today’s piercing tools a far cry from their ancestors. In addition to horizontal boring, the tools can be used for other applications like pipe bursting and pipe ramming. In fact, the development of those trenchless methods is linked directly to the pneumatic piercing tool.

Because of the rocky conditions, Collins decided that a 2-inch PVC sleeve needed to be installed under the road first and the actual 1-inch water service line inserted into the sleeve. The sleeve would protect the service line from possible damage from the sharp limestone fill. The soil conditions also meant that there was a possibility that the bore-hole would collapse before PVC sleeve was in the ground. Collins needed to pull the pipe behind the piercing tool while boring.

Major said, “When you’re working with large tools, boring long distances or working in soils that tend to collapse after the bore, it’s best to pull the pipe directly behind the tool while boring. Several techniques can be used to pull pipe behind a piercing tool depending on the length, type and diameter of the pipe. For this particular job, we fitted the Grundomat with a pipe pulling tail piece and a clamp on the end, specifically designed for rigid pipe like PVC.”

By mid-morning on the day of the project, Collins had dug the launch and exit pits and was ready to start bore. The 3-inch diameterGrundomat-P 75 was equipped with a pipe-pulling tailpiece. The 80-foot, 2-inch PVC sleeve was attached to the rear of the piercing tool. After carefully lining up the shot Collins started the tool and boring was underway. Despite the tough conditions the tool made tremendous progress. At the 65-foot mark, however, they encountered some trouble.

Major said, “The bell on the PVC we were pulling was bigger that the diameter of the pipe, closer to the diameter of the tool. At approximately 65 feet in to the bore, the bell hit an impasse and the tool continued on dislodging the pipe pulling clamp. We were forced to attempt to reverse the tool and try to back it and the pipe out.”

The piercing tool was put into reverse by turning the air hose a quarter turn. Slowly the tool began to back out of the bore-hole. After two hours, the tool had reversed itself and the PVC pipe out of the bore-hole. Collins cut the bell off the pipe, reattached it to the tool and started boring again, this time without any obstacles. After another hour, the tool reached the exit pit on the other side of the highway and the 2-inch PVC sleeve was in place.

Collins removed the piercing tool from the air hose. He then attached the new 1-inch HDPE service to the hose. As the air hose was removed from the sleeve, the new service was pulled into place. Collins tied the service into the house connection and the 4-inch main.

Everyone involved with the project was extremely pleased with the results. Major said, “The conditions were about as tough as they come for a piercing tool. The bore was long and the limestone fill was very challenging. We were all excited to see that tool arrive on the other side of the road.”

Collins said, “The Western Rockcastle County Water Association was really impressed that we were able to get under the road through those tough soils. And the homeowner was very happy, after seven years he had all but given up.”