The Kinsel crew utilized a 18-inch diameter Grundocrack Goliath pneumatic pipe bursting tool for the Hillsborough project. The pneumatic tool effectively bursts the existing pipe and forces the fragments into the surrounding soil while pulling in the new pipe simultaneously.

With a quickly deteriorating national infrastructure and continuing mandates from governmental agencies, the urgency to replace water and sewer mains has never been greater. Crowded city streets, historic locations and the expense of major restoration, has shifted the focus from traditional open cut construction and put trenchless construction techniques center stage. Over the last few years, pipe bursting has emerged as one of the most popular and preferred methods of trenchless pipeline rehab and replacement.

Dave Arthurs, Area Manager for Kinsel Industries, Houston, TX, has been in the utility construction business for over 15 years and involved with pipe bursting for almost 10 of those years. Recently, Kinsel Industries took on a difficult pipe bursting project in the hills of northern California that put Arthur’s knowledge and experience to the test.

Arthurs said, “The project for the city of Hillsborough, California was very challenging. Sections of the failing sewer system ran parallel to some very large diameter water transmission mains. In addition, the area along the San Mateo Creek, where much of the work was done, is considered environmentally sensitive, home to several endangered species of plants and animals. Trenchless pipe bursting provided a pipe replacement option that addressed all the concerns we had going into the project. It’s a trenchless option that limits disruption and has a low impact on structures above and below ground.”

Hillsborough’s collection system consists of approximately 82 miles of sanitary sewer pipes ranging in size from 6 to 18 inches. Two Inflow and Infiltration studies completed in the 1990s showed the 50-year-old plus system to be capacity deficient and not able to meet needs of Hillsborough’s 11,000 residents. Peak flow was estimated at 8.9 million gallons per day. The existing system was sized to handle approximately 5.5 million gallons.

The study identified a large section of the system as a major problem area with significant deterioration. That section runs through a right-of-way that houses the Hetch Hetchy water mains and is maintained by the San Francisco Water Department. Those mains run from the Hetch Hetchy watershed located in Yosemite National Park and supply over 85% of the water for the city of San Francisco and surrounding areas. The water is transported through large diameter water transmission mains, ranging in size from 49 inches to 79 inches. They are an invaluable resource and are treated as such.

In addition to concerns about the Hetch Hetchy mains and the environmentally sensitive area, the diameter of the existing pipe needed to be increased three nominal sizes in order to raise the system’s capacity to desired levels. Pipe bursting offered an economically feasible and environmentally sound solution to the replacement dilemma. 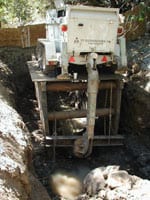 A 20-ton Grundowinch was used to guide the pneumatic bursting tool through the existing pipe. The winch is key to the bursting process providing constant and consistent tension.

Pipe bursting was developed in Europe from the concepts found in pneumatic piercing tools. The tool is basically a piston within a casing. Compressed air drives the piston and the piston drives the tool, creating percussive action. Piercing tools have been widely used since the 1960s. Orton explained, “In the late 1970s German and British contractors tried using piercing tools to break cast iron pipe and pull in new pipe. In Europe at that time, there was a great need for trenchless pipe replacement, specifically for cast iron pipe in the gas industry. The results of those early experiments eventually evolved into pipe bursting as we know it today.”

While static pipe bursting equipment is growing increasingly common for ductile iron and steel pipe, a majority of pipe bursting done in the United States is done with pneumatic tools. During pneumatic pipe bursting, the pipe bursting tool is guided through a fracturable host pipe (pipes such as clay, concrete, cast iron, etc.) by a constant tension winch. As the tool travels through the pipe, its percussive action effectively breaks apart the old pipe.

Depending on the specific situation, the tool is equipped with an expander, located at the rear of the tool, that displaces the host pipe fragments and makes room for the new pipe. As the tool makes its way through the host pipe, it simultaneously pulls in the new pipe, usually HDPE.

With the use of expanders, one tool can be used to burst several different size host pipes and replace them with new HDPE of the same size or larger. Pipe bursting is the only trenchless method of rehabilitation and replacement that allows for the upsizing of the existing pipe.

A 500-ft pilot bursting project in late 1999 opened the way for pipe bursting to be specified as the method of choice for remaining replacement. During that initial project, vibration studies were conducted and much scrutiny given to the affects of bursting on the Hetch Hetchy water mains. It was determined that any effects from vibration through the pipe bursting method were negligible.

Arthurs said, “Monitoring stations were also set up during the main project. The stations were located in sections of bursting that were in close proximity to the large diameter water mains, typically anytime the bursting came within 20 feet of the mains. Again, vibration proved to be a non-factor in this project. Everything was well within tolerances. In addition, an environmentalist was employed full time to supervise the project and make certain nothing occurred that would put the endangered species in harms way.”

Orton said, “We needed a tool that would have enough power to complete the upsize. Also, winch selection was key. The Grundowinch provides constant tension at variable speed. That means the winch is able to make adjustments for conditions that affect line speed during operation, providing constant, consistent and smooth pulling force which is essential for successful pipe bursting.”

The Kinsel crews replaced the existing 15-inch VCP sewer main with 28-inch High Density Polyethylene (HDPE). The existing main ran through a right-of-way that houses large diameter water transmission mains that supply much of San Francisco and the surrounding area with water.

In order to accomplish the significant upsize the Goliath pipe bursting tool was fitted with a 34.5-inch OD rear expander. Orton said, “The large expander was needed to create the annular space necessary to accommodate the new 28-inch pipe. This adds another dimension to pipe bursting. Instead of the upsize being 15 inches to 28 inches, it’s really 15 inches to 34.5 inches. It’s something that needs to be taken into consideration when choosing the appropriate bursting equipment for a particular project.”

The Kinsel crew divided the project into 400-ft sections for bursting. Crews would then replace one 400-ft section at a time. First, crews prepared launch and exit pits on either end of the 400-ft run. After completing the launch and exit pits, crews then fused the necessary length of 28-inch SDR 17 HDPE for that section. The 20-ton Grundowinch was positioned at the exit pit while the bursting tool was attached to the new HDPE at the launch pit. The winch cable was then rodded through the existing pipe section and connected to the bursting tool. At that point, bursting operations were ready to begin. The pneumatic tool was launched into the host pipe and the process was under way. According to Arthurs, from start to finish, a 400-ft section of bursting took between four and five hours to complete.

Pipe bursting was well suited for this project because it is a trenchless construction method and creates minimal disruption. The location of the project was not only home to large diameter water transmission mains, it was also considered an environmentally sensitive area, home to several species of endangered species of plants and animals.

Over 1,800 feet of 15-inch VCP was replaced with 28-inch HDPE through pneumatic pipe bursting for the Hillsborough project. Arthurs said, “In the sections where pipe bursting was utilized it was extremely effective. It was a very environmentally friendly method and very capable one at the same time.”

Orton said, “Pneumatic pipe bursting has had a tremendous impact on the pipe line rehabilitation and replacement industry. It’s developed into, in many cases, a preferred method of pipeline replacement because of its inherent benefits. It has a wide range of capabilities and can be used is many different situations. Plus, because the method is trenchless, it offers minimal social disruption. Being able to replace aging sewer and water mains without tearing up roads, sidewalks, landscape and other sensitive areas is something everyone can be excited about.”