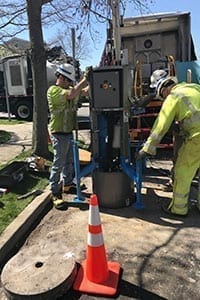 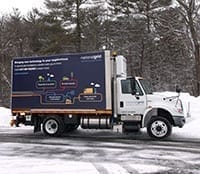 National Grid mounted its keyhole drills on platform trucks for easy transport to and from jobsites. The trucks are also equipped with bentonite mixing and delivery systems.

When it comes to leadership and pushing the boundaries of trenchless technologies, it’s hard to match the impact that the gas industry has on the usage and development of new tools and the acceptance of a variety of trenchless methods.  Gas utilities have been on the forefront of trenchless technology for decades, starting with live insertion in the 1960s, the use and deployment of piercing tools in the 1970s, the advent of directional drilling in the late 1980s and the development of pipe bursting in the late1990s and early 2000s.

National Grid is one of the largest investor-owned energy companies in the world.  Based in the UK, the utility has a long history of utilizing and implementing trenchless technologies.  In the US, with a service territory including Massachusetts, New York and Rhode Island, the company provides electricity to approximately 3.3 million customers.  According to its website, National Grid is the largest distributor of natural gas in the northeastern U.S., serving approximately 3.4 million customers in New York, Massachusetts, and Rhode Island.  In Great Britain, the company delivers gas and electricity throughout the entire the country.

National Grid’s Director of R&D and Advanced Field Services Dennis Ruppert explained that his first exposure to this technology occurred in Europe.  He said, “National Grid is a UK based company. So we had seen the technology while we were in Europe.  At the time, we went with our colleagues in the UK to Paris where the unit was working in a historical district. They were working in a core to push a service to a building and put a new service in without any additional excavation, except the original core.  So when we saw that, we thought this had great potential for our work in the States.  So we partnered with TT Technologies and that’s how we got involved in utilizing the equipment.”

The Grundopit K Keyhole Drill from TT Technologies was developed to bridge the gap between keyhole work and pipe installation. The mini directional drill is able work within a 24-inch diameter core.

TT Technologies President/CEO Chris Brahler said, “The merging of these technologies, coring and pit-launch directional drilling, is definitely a global initiative that includes some of TT Technologies’ affiliate companies in Europe and Asia.  The conditions in Europe, specifically the age of the infrastructure and the desire to preserve the historical nature of many of towns and communities, requires that next step of trenchless technology.  In this case, it’s combining the coring and HDD technologies.

“With National Grid, their service area is unique, along with some of the regulations that are in place regarding protected roadways and winter work restrictions.  It makes sense that this technology would find its way into the National Grid toolbox here in the United States.”

National Grid has been utilizing coring technology and keyhole applications since the early 1990s.  Ruppert said, “National Grid is a group of companies that merged together, but our legacy company, Brooklyn Union Gas, developed a technique to work in small holes.  So at that time we were digging 1-foot by 1-foot holes or 18-inch by 18-inch holes, square.  We would jackhammer them, vac them out and do our work.  But we discovered that the restoration costs for even that small hole were running about the same as if we had excavated a 3×3 or 4×4 pit.

“So we really didn’t see a whole lot of savings.  But when the round core technology came out, it allowed us to take the core out and reinstate that exact same core.  And really reduce the cost of the work.  That was the transition that made it a really efficient tool.”

By the early 2000s, National Grid was using the coring technique for a variety of applications such as valve box adjustments, corrosion work, installing anodes, bell joint leak repair, injection of anaerobic sealant and more.  While crews were able to do a lot of different work inside the small holes, the ability to install service lines with that technology was always lacking. 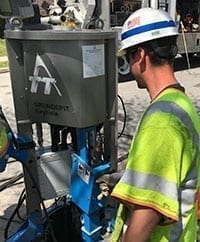 National Grid crews are able to control all of the keyhole drill’s functionality through an above ground control panel.

While National Grid has been coring and working in the small windows for decades, the advent of the K-drill Grundopit Keyhole mini-directional drill brings the long desired capability of installing new pipe within the small 24-inch diameter core.

The Grundopit-K drill was developed to bridge the gap between keyhole work and pipe installation.  The unit is a fully automated, mini-directional drill that is able to work in a 24-inch diameter circular excavation.  It is contained within its own shoring cylinder that fits within a cored excavation.   The unit is able to install service installations up to 2 inches in diameter.

Brahler said, “With the core providing very limited working space, the machine needs to be controlled from the surface.  So all of the directional capabilities can be controlled above ground.  But while the operator has the control, much of the drill stem loading and vice cycling operations occur automatically.”

Ruppert said, “The technique can be compared to arthroscopic surgery. That’s kind of the analogy a lot of people use.  The core is removed with a 24-inch diameter hole saw, basically the same principle as a drill bit that you would use to install a doorknob.  Crews vac out soil and the drill is lowered into the 24-inch hole and secured by attaching the stand-off legs.

“Compared to a large directional drill unit, the compact drill works on the same principle, but instead of 15-foot drill rods, the pit-launched drill has rods that are only 9 inches long.  So you drop these rods into the top of the machine.  They automatically flip and align with the drill and thread into place.  We have two of these units and had them mounted on trucks.” 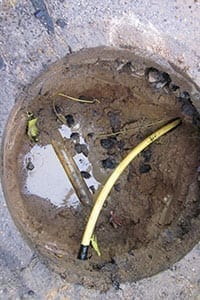 National Grid typically installs 1-inch MDPE services with the keyhole drill, however, the unit is able to install pipe up to 2 inches in diameter.

Typical installations are 1-inch MDPE, however, National Grid has used the K-drill to install pipe up to 2 inches in diameter.  While extensive back reaming is typically not necessary with the installations that the National Grid crews are completing, the unit does have bentonite capability, and a water-bentonite slurry is often used during operations depending on conditions.

National Grid has completed service installations between 125 and 130 feet long.  But often, crews use the keyhole drill to move the project from the road surface to the soft surface behind the curb.  According to Ruppert, this basically means installing the line from the road to the green space area beyond the curb and completing the installation using and standard techniques such as horizontal boring with a piercing tool.

He said, “It’s a really efficient way to use the machine.  We’ll shoot 10, 20 or 30 feet, from wherever it is in the roadway to behind the curb and then we’ll pick it up from there and use one of our standard installation techniques.

Core reinstatement is one of the key aspects of the process and what allows the work to be done on protected roadways.  According to Ruppert, the results are impressive.  He said, “Once we complete work in the field, we backfill the core adding a small layer of small pea gravel and replace the core itself.  We leave it approximately 1/2-inch low.  Then we mix up a cementitious material that we pour back into the hole and set the core.  We’re actually able to float the core back into place.

“And if you see pictures of some of the work we’ve done, as close as 10 or 5 feet away, you can’t even tell we’ve been there.  That’s how well the core reinstatement goes if you do it correctly. We’ve always found that if you set the core correctly, use the right material, the ground around it will fail before the core actually will itself.” 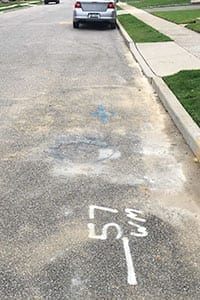 The quality of the core reinstatement is one of the most important and impressive aspects of the keyhole directional drilling process.

National Grid uses the K-drill, for the most part, as a new business tool, often on protected roads that have been recently paved that the utility can’t access through any other means.  Ruppert explained, “Someone calls and says they need gas service and they’re on a protected street. We’ll use that particular tool a majority of the time for that.  In the right location, it’s sometimes the only way we can run gas service to a new customer.”

Ruppert also views the machine as a way to potentially overcome winter work moratoriums the utility faces in some communities.  He said, “A good portion of our service area has municipal winter moratoriums.  So as soon as the asphalt plants close in the wintertime, we’re locked out of work. If we had a request from a customer for new gas service, we’d have to tell them no, wait until April.  Now we’ve been in discussions with several municipalities that have winter moratoriums, explaining to them that we can restore these excavations at any temperature and provide gas service to the customer without having to worry about road patches.  We’re looking at trying that in our Boston locations where many of the municipalities have winter moratoriums.” 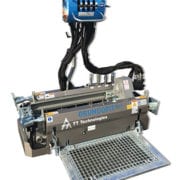 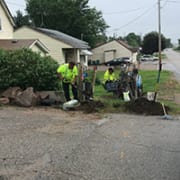