In order to successfully lift the Torrey Pine trees, the Telliard construction crew created a lifting grid for the Torrey pines
trees out of 15-foot long drill stems.

Trenchless construction methods are often the centerpieces of any construction project. Sometimes, however, they can contribute to a project in a small way and still have a big impact. Such was the case recently for Telliard Construction, San Diego, CA, on a project for the city of San Diego, CA.

City officials turned to Telliard Construction, San Diego, CA. for a solution to the problem. According to Telliard Construction Project Manager Dave Telliard, the city did not intend to sacrifice the trees. He said, “The city wanted the trees removed and relocated. Some could be re-planted immediately, but some would have to wait until a new island was constructed before they could be replanted. Upon accepting the project, we became responsible for the trees for three years.”

Successfully removing and relocating the trees was a difficult undertaking made easier through the use of trenchless technology, specifically a Grundomat piercing tool from TT Technologies, Aurora, IL.

Each root ball was approximately 16 feet in diameter or a radius of 8 feet from the trunk of the tree. The root balls were
wrapped in landscape grade burlap and secured with wire mesh.

Solving the traffic congestion problem in San Diego is one of the top priorities of the city’s mayor. According to the Texas Transportation Institute’s 2001 Urban Mobility Report, of the 68 cities evaluate in the report, San Diego received the fifth worst travel rate index.

The project in La Jolla is a small part of San Diego’s effort to reduce traffic congestion. Telliard said, “The two major roads that run through La Jolla merge at the island intersection the city planned to reconfigure. It’s a major traffic zone and suffers from terrible congestion. The island between the roads was home to seventeen rare and protected Torrey pine trees. The city planned to create a new intersection in order to alleviate some of the traffic flow problems.”

Not only was Telliard responsible for relocating the trees, he was responsible for the their well being. Ensuring the 50-plus-year-old trees survival took great skill and know-how.

Before utilizing the Grundomat piercing tool, the Telliard crew place an average of one or two drill stems per day. With the
piercing tool, Telliard was able to ram the stems in place in approximately one to three minutes per stem.

Telliard Construction has a good deal of experience handling and moving trees. Telliard said, “I was fortunate to work on several complex tree moving projects in the past. My father also worked for some prominent hotels and moved palm trees, some of which were the largest ever moved, at the time. We are still primarily a general contractor, but we do have our landscaping license and a good deal of that type of experience.”

Telliard said, “As I mentioned, we’re responsible for the trees for three years. The arborist’s job was to consult with us and report to the city. He tells them how the trees are doing and, early in the project, evaluated the trees’ chances of survival. He provides recommendations for care of the trees as well.”

As the Telliard crew prepared to begin removing the trees, it became apparent that the project was going to be more difficult than anticipated. According to Telliard, the trees were planted very close to the curb and gutter, and accessing enough of the trees’ root systems to remove them successfully was going to be a challenge.

Telliard said, “We needed to dig down and collect the tree’s roots into a root ball. The root ball keeps the tree alive while it is being moved. When the tree is replanted, these roots grow back into the soil and the tree continues to grow. Because of the curb and gutter issue, we had to have the arborist on site, helping identify which roots to cut. We had to be very careful during this process and make sure we could get to enough roots for the trees to survive.”

Telliard and his crew chose to gather each tree’s roots in a circular root ball. Each root ball measured 16 feet in diameter, a radius of 8 feet from the trunk of each tree. Telliard carefully dug around the tree, using a mini-excavator, exposing the tree roots to a depth of approximately five feet. Once the roots were exposed and cut, they were encased in landscape-grade burlap and secured with a wire mess. At this point, the root ball was complete and the trees were then prepared for moving. 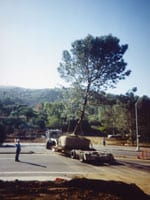 In all, seventeen 50-year-old rare Torrey pine trees were removed and relocated. The trees weighed between 70,000 and 100,000 lbs. and stood between 50 and 70 feet tall. A certified arborist consulted on the project.

Removing the 50- to 70-foot tall pine trees proved even more challenging than preparing the root balls. Telliard, however, had a plan. He created a grid composed of 4-inch diameter, 15-foot long steel drill stems under the root ball. This allowed a large crane to lift the trees and place them on a transport vehicle. The problem arose in getting the drill stems in place to form the lifting grid.

Telliard said, “We tried many different methods to get the pipe through the ground and in place under the trees. We tried pre-drilling. We tried pounding them in with a Bobcat breaker. We tried a pneumatic hammer, but we just weren’t getting the results we wanted until we talked with Dennis Oellers from TT Technologies.”

TT Technologies Product Specialist Dennis Oellers brought several pneumatic piercing tools to the job site. Telliard said, “Luckily I was able to get a hold of Dennis. He came down with all his different tools and we tried to figure out which one worked best. We went with the biggest, baddest one he had.” The tool Telliard selected was the 7-inch diameter Grundomat-P 180.

Telliard didn’t intend to use the piercing tool for boring; instead he wanted to use it as a pipe rammer to drive the steel rods under the trees. The results were amazing. Instead of taking all day to pound one or two stems in place, it took a matter of minutes.

Oellers said, “Each tree required up to 15 rods to complete the grid. Between ten and 12 rods were rammed under the root ball running north to south, spaced approximately six inches apart. The last two were put in place manually, one rod on the north end and one rod on the south end. The final configuration appeared similar to a wooden raft. With theGrundomat, we were able to get the steel pipes in place in two or three minutes per stem.”

Ramming the steel rods in place with the piercing tool was a simple operation. The rods were placed at the base of the root ball and the Grundomat secured to the end of a rod with straps, similar to the ones used in pipe ramming. Once the air was turned, ramming was under way. Telliard said, “It was unbelievable. The tool performed like no other. The amount of productivity we got from this tool probably saved us a month’s worth of time and labor.”

According to Telliard, the crew worked in a two-week rotation. The crew spent two weeks preparing a group of trees. Then came moving day and the crew would move seven to eight trees at one time. A 300-ton crane was used to lift the trees, which Telliard estimates weighed between 70,000 and 100,000 pounds each. The trees were then placed on a lowboy trailer and relocated until they could be replanted

Telliard said, “We tied the pipes that made up the grid together, but when the crane lifted the trees the weight alone was enough to keep everything in place. Before the cranes got there we would go up on lifts above the canopy of the tree and drop what we called messenger ropes to the ground. When the crane came, we would attach the ropes to the crane’s straps and guide them through the tree to keep them from breaking any branches.”

Over a period of one month, all seventeen trees were successfully removed. To date, eight of the seventeen trees have been replanted. The remaining trees will be replanted upon completion of a new island intersection. Telliard was very pleased with the results of the project. He said, “We didn’t invent these methods for removing the trees, but we saw so many ways to improve upon the techniques. That’s why I was so glad to get a hold of Dennis at TT Technologies. That just made it a great project.” 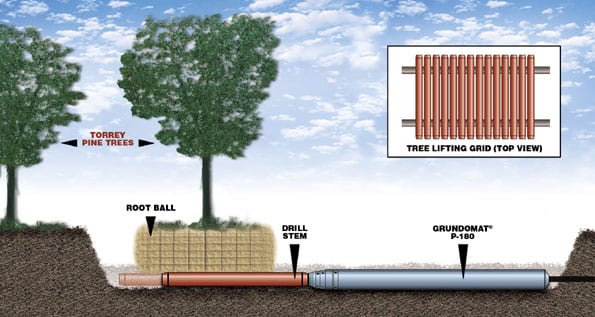 In order to get the drill stems in place, the Telliard crew used a Grundomat P-180 piercing tool to ram the drill stems under the root ball of each tree. Each lifting grid was composed of twelve to fifteen drill stems.