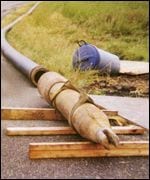 The Point Reyes National Seashore is considered one of the crown jewels of the National Park System. Located just north of San Francisco, CA, the park covers more than 71,000 acres and receives over two million visitors annually. It is home to over 20% of California’s flowering plant species and 45% of the bird species found in North America. Point Reyes also boasts 37 land mammal species and some of the best whale-watching locations in the world.But even an area like Point Reyes has an infrastructure to maintain. Being able to maintain or upgrade that infrastructure without disturbing the natural beauty and intrinsic features of the park is in everyone’s best interest. When designated a national park in 1962 by President Kennedy, the groundwork for major residential development of the area was already in place at Point Reyes. President Kennedy’s declaration prevented that development and the existing systems were utilized by the park service.Point Reyes Facility Manager Larry Harris said, “Infrastructure like roads and some water mains were in place before the park was a park. It was designed for a lot of build out, but of course the park didn’t do that. Instead of serving growing subdivisions, the self-contained water system supports a few park worker residences, an environmental camp and a multiple building youth hostel. You can imagine a system of that size never getting the use it was designed for. There are a lot of connections, corporation stops, fittings, etc. that were never put in service. Eventually they began to leak. Last year it became apparent that approximately a mile of potable water main would need to be replaced.”To replace the mains, an environmentally friendly, trenchless, pipeline replacement method was highly desirable. Based on the recommendation of the park’s engineering firm, Psomas & Associates of Sacramento, CA, the job was let as pipe bursting only. Pipeline contractor Pfister Excavating, Vallejo, CA, was awarded the job and would attempt to replace 1,500 feet of 6-inch Asbestos Cement Pipe (ACP) with 6-inch High Density Polyethylene Pipe (HDPE) and 1,800 feet of 8-inch ACP with 8-inch HDPE. To perform the work Pfister Excavating President Greg Pfister utilized the Grundocrack Pipe Bursting System from trenchless equipment manufacturer TT Technologies, Aurora, IL.

Pipe bursting was developed in Europe from the concepts found in pneumatic piercing tools. These tools have been widely used since the 1960s. TT Technologies pipe bursting specialist Mark Maxwell explained, “In the late 1970s German and British contractors tried using piercing tools to break cast iron pipe and pull in new pipe. In Europe at that time, there was a great need for trenchless pipe replacement, specifically for cast iron pipe in the gas industry. The results of those early experiments eventually evolved into pipe bursting as we know it today.”While hydraulic and static pipe bursting equipment is common, a majority of pipe bursting done in the United States is done with pneumatic tools. During pneumatic pipe bursting, the pipe bursting tool is guided through a fracturable host pipe by a constant tension winch. As the tool travels through the pipe, its percussive action effectively breaks apart the old pipe and displaces the fragments into the surrounding soil. Depending on the specific situation, the tool is equipped with an expander that displaces the host pipe fragments and makes room for the new pipe. As the tool makes its way through the host pipe, it simultaneously pulls in the new pipe, usually HDPE.With the use of expanders, one tool can be used to burst several different size host pipes and replace them with new HDPE of the same size or larger. Pipe bursting is the only trenchless method of rehabilitation and replacement that allows for the upsizing of the existing pipe.

Over 3,300 feet total of 6-inch and 8-inch water main was replaced through pneumatic pipe bursting in the pristine Point Reyes National Seashore.

The water main replacement project at Point Reyes became part of a larger project more or less by accident. Harris said, “Many people will remember the Vision Fire we had here back in 1995. During that fire, the pump house and well for this system were destroyed. First we replaced the well and pump house. Then it became necessary to replace the mains.”According to Harris, the system had a long history of leakage problems. The addition of a new filtration system really spurred on the replacement project. Harris said, “We put in a new filtration system when we built the new pump house, because of the high amount of iron in the water. The system is equipped with automatic flushing and backwash features. We were continually losing potable water through the leaky main every time the system would cycle. It becomes a resource conservation issue. You just can’t justify that loss of water.”The “Vision Fire,” (in reference to the location of its origin, Mt. Vision), destroyed much more than the well and pump house. The fire burned over 12,000 acres of private, state and federal land from October 3rd until October 7th, 1995.

Pipe bursting was the ideal choice for the Point Reyes project for several reasons. First, the method is trenchless. Disruption to the park itself would be limited to small launch and exit pits. No trace of the project would be evident shortly after its completion.Second, because pipe bursting follows the path of the exiting line and does not require the removal of the existing line, Pfister would be able to replace the asbestos cement pipe without removing it from the ground. This is significant because costly and time-consuming disposal procedures for asbestos materials can be avoided by leaving the pipe fragments underground. 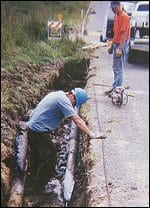 For bursting the 1,500-foot portion of 6-inch ACP main, the Pfister crew used a 5.75-inch diameter Grundocrack PCF 145 with a 7.9-inch rear expander. For the 1,800-foot section of 8-inch ACP, the crew used a slightly larger and more powerful 8.5-inch diameter Grundocrack Hercules with an 11-inch rear expander. A 10-ton capacity constant tension Grundowinch was also used during the pipe bursting. According to Maxwell, the winch is essential to the bursting process. He said, “The Grundowinch provides constant tension at variable speeds. This is especially important when the bursting tool reaches difficult areas like clamps, joints or point repairs. After a section like that is burst, there is less resistance and the tool speeds up quickly. The Grundowinch compensates for this change in speed and prevents slack from developing in the line.”The Pfister crew divided the main into smaller 300- to 500-foot sections. Pfister said, “The main ran parallel to what could be considered a meandering road. While it was basically straight, there were both vertical and horizontal changes in the direction of the pipe. By bursting smaller sections, the turns and bends of the pipe were easily manageable. Longer runs would have been more difficult.”Approximately 7,000 feet of 2-inch PVC was used as the bypass so that service could be maintained during the burst. The crew ran the line along the ground throughout the length of the run and tied in the services. Once the bypass was in place, the crew was ready to begin bursting. 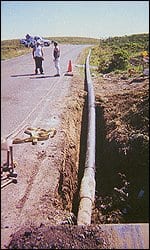 Pipe bursting was the perfect application for the Point Reyes water main replacement project. Only several small 3-ft by 15-ft launch and exit pits were needed to complete the project. When bursting was complete, the pits were filled in and restored.

Bursting operations went very smoothly. Launch pits measured approximately 3 feet by 15 feet while exit pits measured 3 feet by 10 feet. The Pfister crew burst and replaced an average 3 to 5 feet of pipe per minute for both the 6-inch and 8-inch sections. Service connections were made using service saddles and corporation stops. Once the mains were in place and the service connections made, the Pfister crew tested and chlorinated the new line. The bypass was then dismantled and exit and launch pits restored.Everyone was extremely pleased with the results of the project. Harris said, “Pfister Excavating did a great job. They’re a great contractor. They are very knowledgeable and were able to perform the work not really knowing what they were going to encounter because they never had any actual system specs or as built drawings.” Pfister said, “This job really showcases what pipe bursting has to offer. It’s a sensitive area environmentally where open cutting would have had a negative affect. It really worked out to everyone’s advantage.”