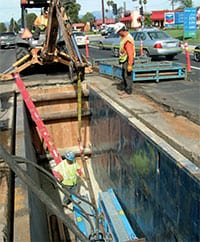 J. Fletcher Creamer & Son, Inc. and Spiniello Companies are two of the most recognized utility
contractors in the North America. Each company has its own tools, equipment and depth of experienced employee resources. Both of them have been involved in some of the biggest, toughest, most diversified trenchless projects in the country. Both contractors are headquartered in New Jersey with satellite offices around the country, and each has been in business for over 83 years.

The city’s Groundwater Recovery Enhancement and Treatment Program, Phase 1, included installing and rehabilitating approximately 40,400 lf of recycled water pipeline. Pipeline work consisted of sliplining approximately 15,000 lf of existing VCP with 22-in. and 18-in. HDPE. Pipebursting included approximately 9,000 lf of 15- and 18-in. VCP to 18-in. HDPE. Additionally the project included sections of open cut, auger boring, microtunneling and HDD. Acording to Dave Arthurs, Resident Engineer for AECOM, unique features of this project was the diversity of the trenchless
methods used and the high productivity.

During the bidding process trenchless specialist George Mallakis of TT Technologies, Aurora, Ill., worked very closely with the Creamer and Spiniello joint venture to understand the scope of the work, soil conditions, and lengths of runs, and production expectations for both the pipebursting and sliplining.

He said, “We discussed various equipment options, equipment and personal support to get the job done in the most economical and productive fashion while maintaining the highest of quality. Originally the pipebursting work was to be accomplished with an 18-in. Grundocrack pneumatic pipebursting system.

“Once the project was awarded, Spiniello’s Superintendent Ron Wigner recommended going with TT Technologies 1250G static Pipebursting® system instead of the 18-in. hammer because of various jobsite conditions. He and his crew recently used the 1250G on another project and were confident they could beat the estimated productions with less people and make
longer runs with this equipment.”

According to Andrew Vena, Project Manager for J. Fletcher Creamer & Son, Inc. expectations at bid time were to allow 18 days for set up and 18 days to burst the 15- and 18-in. lines for a total of 36 days.

The pipebursting head with new 18inch HDPE is being pulled into extraction cage.

Unique to this system, patented Quicklock bursting rods are linked not screwed together like traditional drill stems or other static systems. This system speeds the installation significantly. The rods can be quickly removed one at a time at the retrieval pit during the bursting operation. While HDPE is commonly used, new techniques and technologies are allowing contractors a choice when it comes to product pipe. According to Mallakis other pipe materials are being installed now through static bursting include ductile iron, Fusible PVC, restrained joint PVC, sectional “No-Dig” VCP, and steel.

He said, “Several techniques have been developed by TT Technologies, pipe manufacturers and partner contractors to allow the use of a variety of product pipe options with the static pipe bursting process. Beside its inherent trenchless aspect, this is one of the main reasons that the popularity of the method has really taken off. It really provides a level of choice and versatility previously not available with the bursting process.” 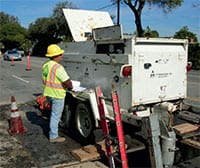 Crews used a 20-ton, constant tension Grundowinch for sliplining the 18- and 22-inch pipes.

Actual total days on the job totaled 20, instead of the estimated 36 days. Originally plans called for 26 launch and receiving pits, but with the performance of the static pipebursting equipment crews were able to eliminate seven pits by increasing the length of the runs. The longest run was 787 lf. Bursting rates averaged approximately 5 feet per minute with the average daily totals of approximately 600 lf.

Crews were able to set up and burst one to two runs each day. Due to the Quicklock rod system and a newly designed hydraulic power pack the contractor was able to beat their expected production while using less equipment and a smaller crew to accomplish the job as bid. Ron Wigner, Superintendent for Spiniello and Jose Gerado, Foreman demonstrated extraordinary skills and abilities, performing some of the most productive and efficient pipebursting seen anywhere in the country.

Sliplining production was also impressive. The 18-in. and 22-in. pipes were expected to be sliplinned at a rate of one run per day, averaging 600 lf. With the use of the 20-ton Grundowinch, actual production averaged 1,200 linear feet per day with the longest run being 1,675 lf. in a single day. Crews fused pipe in 500-ft sections. Once the winch was set up and the winch line placed (up to 2,000 feet at times), sliplining would begin at a rate of about 25 feet per minute. When crews reached the 450-ft. mark, they would fuse on another 500-ft section and continue pulling.

This image shows the 18-inch HDPE being pulled into the extraction cage after another productive, successful slipline.

Bringing together two nationally renowned pipeline rehabilitation contractors who normally compete against each other on projects just like this, they needed to learn to work together. Each company brought their own skills, equipment, personnel and depth of experience to compliment each other. Even though these companies have worked together previously as a JV, this is the largest and most complicated thus far for the JV.

According to Vena, Creamer’s Project Manager and Ron Wigner, Spiniello’s Superintendent, there was some apprehension in the beginning on how these two companies’ crews would work together. After a short trial period both companies’ personnel adapted to each others styles and started to rely and lean on each others strengths to get the job done.