With the majestic Sangre de Cristo Mountain Range as a backdrop, Albuquerque, NM based utility contractor Vis-Com recently took on a major trunk water main replacement project for the town of Taos, NM. The project included the replacement of a failed PVC water trunk main. With much of the main running under streets, roadways, sidewalks and lawns, the project was specified as pipebursting only.

According to Vis-Com President Ron Lucero the Taos project provided the company with a good opportunity. He said, “Before this particular project we had pneumatic pipebursting experience for replacing sewer mains, but had never done a water main bursting project before. We partnered with TT Technologies for equipment training to accomplish the project.”

In order to replace the nearly 16,500 feet of 8-inch PVC, Lucero used the Grundoburst 800G static pipebursting system from trenchless equipment manufacturer TT Technologies, Aurora, Ill. In addition to the relatively large scale of the replacement, the project also included one single run of over 2,800 feet, setting a new world record for the longest continuous static pipebursting run. 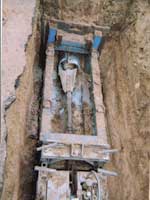 When it comes to utility contractors, Vis-Com is as diverse as they come. With an average crew size of 75 employees the company takes on a wide range of projects. Lucero said, “We’re basically a general contractor that specializes in utilities, all utilities. We do signalization, highway lighting, directional drilling and water and sewer pipebursting. We are a natural gas distribution maintenance contractor as well. We also perform power line construction underground, URD. So basically anything that has to do with utilities, we’re in it.”

Lucero has over 30 years of utility contracting experience behind him and started Vis-Com in 1994. He is always looking for ways to improve safety and efficiency. Trenchless pipebursting has been one of the methods that has allowed him to do both. The project in Taos also gave Lucero and his crews the opportunity to expand their bursting knowledge. 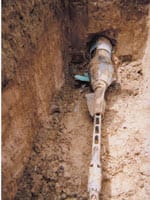 The project in Taos called for the replacement of failed 8-inch fiberglass-wrapped PVC with 10-inch HDPE. During the static process the existing pipe is burst or split by a special bursting head or bladed rollers. The fragmented pipe is forced into the surrounding soil while the new pipe is pulled in simultaneously.

The static bursting process is basically a three-step process. After establishing launch/insertion and exit/machine pits, bursting rods are inserted through the existing line from the exit pit to the launch pit. At the launch pit, the bladed rollers, bursting head, expander, and new HDPE is connected to the bursting rods. Finally, the entire configuration is pulled back through an existing line by a hydraulically powered bursting unit. As the bladed rollers are pulled through, they split the host pipe. An expander attached to the rollers forces the fragmented pipe into the surrounding soil while simultaneously pulling in the new pipe.

Oldenburg sites the bursting rods as a key component to static bursting success. He said, “Patented Quicklock bursting rods are linked together not screwed together like traditional drill stems or other static systems. This system speeds the installation process as well as the breakdown procedure. The rods can be quickly removed one at a time at the exit pit as bursting is in operation. And while HDPE is commonly used, new techniques and technologies are allowing contractors a choice when it comes to product pipe. Other pipe materials that can be installed through static bursting include ductile iron, PVC, specially designed clay and even steel.”

Vis-Com is a diverse utility contractor. This was their first attempt at a water static pipebursting projects. According to project superintendent Roy Maxey the crews caught on to the static bursting process quickly.

According to Vis-Com project manager Mark Fogell, the existing trunk main for the Taos project was fiberglass-wrapped 8-inch PVC. The troublesome pipe had a history of failing and needed to be replaced, but with a large portion of the main running under asphalt roads, as well as driveways and lawns, the project was specified as pipebursting only. He said, “The goal of the project was to keep disruption down to a minimum and we were able to do that with the static bursting set up. A good portion of the project ran under a major county road. Limiting asphalt restoration was key to keep project costs in line and reducing inconvenience to motorists.”

One particular stretch of pipe replacement under a roadway resulted in a world record pipebursting run. Oldenburg explained, “The big run measured 2,850 feet. The previous bursting record was a pneumatic project that went just shy of 2,300 feet. Vis-Com never intended on setting a record, they were just trying to be as efficient with the project as possible.

Plus the only way this particular run could be completed with the turns and bends it had in it was with a static system with Quicklock rods. Bursting around these bends and curves can pose challenges for many static bursting systems. The importance of the bursting rods cannot be overlooked. Quicklock style bursting rods actually form a flexible chain that, when linked together, has a rather forgiving bend radius. This accommodates some offset pipe bends.”

Vis-Com crews started by excavating launch and exit pits at regular intervals throughout the run. Maxey said, “We set up 4-foot by 15-foot pits in 950-foot increments to allow us to move the Grundoburst after a pull was complete. We’d pull in a 950-ft segment, move the machine, add more pipe and continue pulling. It really worked out well. We were able to install a single 2,850-foot run over a three-day period. Everyone was very impressed by the results.”

Oldenburg said, “The Vis-Com crews were excellent. They were able to get a handle on the bursting process quickly and then complete a world record length burst. I think that speaks volumes about Vis-Com.” 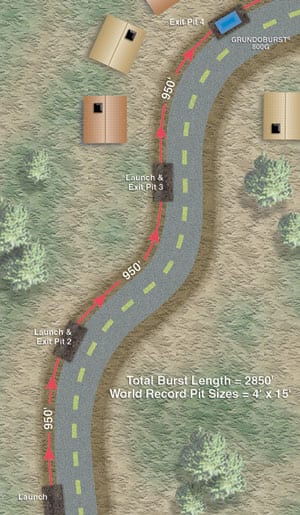 Vis-Com crews started the 2,850-foot world record burst by digging launch and exit pits at 950-ft increments throughout the length of the run. The crews would pull in a 950-foot segment of pipe, move the machine back, add more pipe and keep pulling.

Piercing Tools: Having an Impact from Sea to Shining Sea