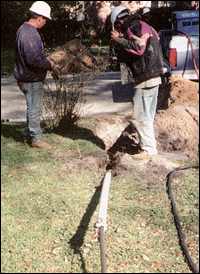 “And if you believe that, I have some swampland in Florida for sale.” That saying has been around for years. The truth behind that saying makes Florida one of the most unique states when it comes to water utilities. One utility in particular, Florida Water Services, Orlando, the state’s largest privately owned water utility, provides 35 million gallons of water a day to more than half a million customers in 120 Florida communities. Maintaining those systems effectively and efficiently is a difficult task. Florida Water Services (FWS) has turned to trenchless methods to meet the challenge.

Since becoming a state in 1845, Florida has seen several periods of extremely rapid growth. In the early 1900s, state officials began draining some of Florida’s swampland to make it suitable for commercial and agricultural use. Word of rich farmland and financial opportunity in Florida quickly spread throughout the country. Cheap swampland was for sale in Florida.

During this first boom in population and again after World War II, during the second boom, developers came to Florida. Many of them were granted permission to develop areas of land into trailer parks and small communities with one stipulation: They had to provide their own water/wastewater utility. During that time, that was not hard to do.

Florida Water Services Spokesman Tracy Smith, explains, “Florida sits on one of the largest fresh water aquifers in the world, over 800 cubic miles in size. Simply put, for a developer to tap into that resource all he would have to do is poke a hole in the ground.”

Eventually those developers reached the point where they had built up their area as far as it could go or as far as they wanted it to go. At that point, many realized they did not want to be tied down with the responsibilities of being a water/wastewater utility. That’s when Florida Water Services entered the picture. 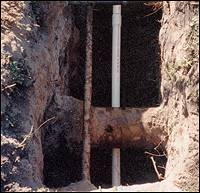 Utility players Florida Water Services was incorporated in 1961. Initially FWS was a combination of six small Central Florida water companies and a subsidiary of Universal Telephone. In 1984, Universal Telephone was purchased by Topeka Group Inc. When Topeka Group purchased the Deltona Corporation’s utility systems in 1989, those utilities became part of Florida Water Services, doubling it in size and making it the largest investor owned water utility in the state.

Today in Florida, there are approximately 6,700 privately owned utilities. Many of these are “mom and pop” utilities, trailer park owners or small developers. Through mergers and acquisitions, FWS continues to gain control of privately held utilities. Their last acquisition occurred in 1994 and there could be more in the works.

Smith said, “While we do not purchase dilapidated utilities, eventually systems already in our control need to be repaired or upgraded. Keeping those costs low and providing good customer service are our main objectives.” FWS kept those objectives in mind for a water main and service line replacement project that recently took place in the Beacon Hills area.

Beacon Hills is a residential neighborhood of Jacksonville. It became part of the Florida Water Service coverage area in 1982. Earlier this year, some residents of the area noticed a substantial loss of water pressure. Other residents encountered rusty, odorous water with a heavy iron taste.

After looking into the problem, FWS determined that the main and service lines needed replacement. FWS Design Services Manager Dennis Westrick explained, “The water mains in that area were asbestos concrete and galvanized steel. The AC pipe had deteriorated and sections of the two-inch galvanized steel pipe were so tuberculated that one could barely see through them.”

Customer Service Florida Water Services places a great deal of emphasis on customer service and efficiency. Smith said, “We are a rising-cost industry. When we have to go in and recover costs, we have to demonstrate prudence in all of our expenditures.” In order to be as efficient as possible and maintain good customer relations, FWS turned to trenchless technology for the Beacon Hills project. 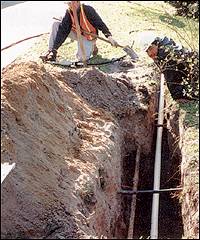 This type of “clean construction,” as Westrick put it, contributes greatly to maintaining positive public relations. Conventional construction would have interfered with the day to day activities of Beacon Hills residents. By using trenchless technology, FWS could minimize street, driveway and landscape disruption.

Burnup & Sims Telcom of Florida, now Mastec, was awarded the bid to replace the old water main and install new service lines for the 3,200 residents of Beacon Hills. While Burnup & Sims is well-known in the telecommunications industry, this past February the company began offering water and sewer rehabilitation services in Florida. Larry Morris, Water and Sewer Service Manager for Burnup & Sims said, “The company realized the opportunity that sewer and water rehabilitation and reconstruction presented, and decided to expand into that field.”

Morris already had a Vermeer D-24 directional drill for the main line installations, but needed a tool for putting in the service lines. He said, “Initially we thought we could do the job with just a directional drill unit. That wasn’t the case. We needed to enlist the help of a piercing tool for the service lines.” Morris added one three-inch Grundomat piercing tool from TT Technologies.

Over the course of eight weeks, Morris’ crew installed approximately 6,000 linear feet of six-inch and four-inch PVC water main with the directional drill and 70 service lines – averaging 30 feet each – with the piercing tool.

The Burnup & Sims crew installed the new PVC water main parallel to the existing AC main. After a 400-foot section of main was in place, crew members dug launch pits at the main line and exit pits next to the service hook-up at the residence. Crews used a Grundoscope telescopic aiming frame and surveyor stake to ensure accuracy. The new two-inch PVC casing was pulled into place by the piercing tool simultaneously as the bore was being made. The new one-inch service line pipe was fed through the casing by hand.

The crew encountered sandy soil conditions, as well as hard clay. This did not, however, affect the accuracy of the directional drill or the piercing tool. Morris said the performance of the piercing tool was exceptional. Bores took, on average, between 30 and 45 minutes each.

Trenchless Impressions Since the Beacon Hills job, Burnup & Sims has done several other trenchless jobs for Florida Water Services. FWS is very pleased with the work being done and the utilization of trenchless methods.

Smith said, “Trenchless technology is cost-competitive. It allows us to go in and make the necessary repairs or enhancements to our systems, provide better product quality and maintain costs.”

The Expanding World of Pipe Bursting: An Inside Look
Scroll to top