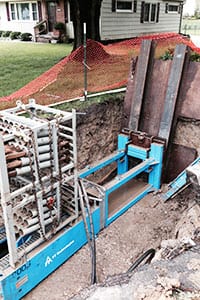 WaterOne plans to replace up to two miles of water main in-house this year through static pipe bursting with the Grundoburst 800G from TT Technologies.

The problem is the same for many municipalities and public utilities, system infrastructure is aging rapidly, but the need to continue to provide value to customers, in terms of rates and consistent services, has to be maintained.  Ignoring the problem or providing a Band-Aid solution to the problem isn’t going to help anyone long term.

WaterOne, Lenexa, KS, is taking charge of its infrastructure.  The water utility has developed a comprehensive in-house trenchless pipe bursting program and is tackling one main replacement after another.  While it sounds easy enough, WaterOne’s Assistant Manager of Construction Kevin Carter can tell you that a lot goes into creating an effective pipe bursting program.

He said, “We started to transition to a trenchless program about 12 years ago in 2006, before that everything was open cut.  We started looking for efficiencies.  Restoration costs are tough on everybody.  They can end up being over 25% of the cost of the entire project.  That’s why we started looking at trenchless technologies.”

With approximately 2,800 miles of mains in the system, comprised largely of aging cast iron pipe, WaterOne’s engineering department has segmented the entire system in order to evaluate it and designate priority for main replacement.  Carter said, “That’s done by the number of leaks.  If a certain segment reaches a certain number of leaks, that segment moves up the list in terms of priority.  The system has helped reduce the number of main breaks annually because, obviously, the leakiest segments of the system are being replaced first.”

TT Technologies Pipe Bursting Specialist Joe Abell believes there is a lot that can be learned from WaterOne’s approach.  He said, “In terms of a pipe bursting program, WaterOne’s program is very sensible.  They get the most out of the time that the equipment is working in the field and they’re extremely efficient.  They’ve developed a really solid model for infrastructure replacement with bursting.” 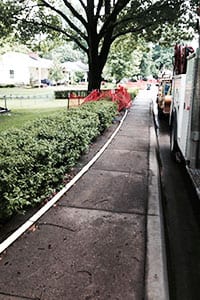 The in-house bursting program has helped limit disruption for customers and keeps the utility on track for the replacement of its aging cast iron infrastructure.

WaterOne is an independent public water utility serving Johnson County, KS, and surrounding areas.  Established in 1957, when area residents, dissatisfied with the service from their water provider, came together and bought out the Kansas City Suburban Water Company. The group reincorporated as public water provider Water District No. 1 of Johnson County.  At that time the utility was supplying up to 5 million gallons per day to area customers.

Today, with nearly 425,000 customers and the capacity to supply up to 200 million gallons of water per day, WaterOne serves customers in 17 cities throughout Johnson County. The utility also serves unincorporated parts of the county and its service connections extend into parts of Wyandotte County and Miami County.  WaterOne is able to grow to meet the demand by following a comprehensive master plan. The organization makes continual investments in infrastructure at the right time.

Carter said, “Typically we follow the “Nessie” model guidelines.  That’s a planning model, an infrastructure replacement tool that originated in Australia.  The curve, years over dollars, visually looks like the hump of the Lochness Monster, hence the Nessie curve. It comes down to looking at your system and determining that you need to be replacing so much of the infrastructure over so much time. The curve allows you to estimate how many dollars per foot for each type of pipe. Then you can build your program from there. It’s a great planning and budgeting tool.”

WaterOne plans to install over ten miles of replacement main this year with upwards of two miles of that through pipe bursting.  The rest will be installed through a combination of other trenchless methods like directional drilling, as well as traditional construction methods. 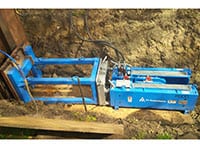 According to WaterOne’s Kevin Carter, the utility has six, five-man crews that work on construction are capable of operating the static pipe bursting system.

WaterOne has six in-house, five-man crews that work on construction projects. Each crew is capable of doing the bursting work. Carter said, “Our mains range anywhere from 2-inch all the way to 60-inch transmission mains.  But for pipe bursting it’s usually 6- and 8-inch pipe, although we have done some 12-inch.  We do upsize mains from time to time, but typically it’s a straight change out.  For typical bursting runs, if we can, I like to go around 700 feet because that’s almost a block.  The shortest we do is 400 feet, longest 780 feet.”

The utility owns one Grundoburst 800G and shares it between crews.  In order to optimize usage of the static system, the utility staggers the starts on projects within the same area or segment.  While one crew is running rods on the bursting equipment, another crew is doing a pre spot on the next section of bursting.  Once bursting is complete, the change over crew comes in to tie in the service connections and the bursting crew, along with the 2-inch temporary service, moves on to the next burst.  Meanwhile the spotting crew starts work identifying underground utilities for the next bursting run.

For product pipe selection, static pipe bursting is one of the most flexible in terms of its ability to install a range of new pipes.  Carter said, “Because the water temperatures vary so greatly within our system, we utilize ductile iron, and with pipe bursting, we’ve moved to Certa-lok pipe and use it for directional drilling as well.  We still do use ductile iron pipe when doing open cut.  But we’ve gone from 100 percent ductile iron 10 years ago to about 10 to 15 percent now. We put together 80 to 100 feet of assembled pipe and when it’s closer to the pit, we put on additional 20-foot segments of pipe until we’re through with bursting.  That helps us keep our overall footprint really small.”

According to Carter, most of the area’s road crossings and services are copper and don’t need to be replaced. Occasionally, crews come across some old PVC or galvanized steel.  Those services are replaced through horizontal boring with a piercing tool or in some cases, directional drilling.  The utility is also currently renting a Grundopit pit launched directional drill from TT Technologies and intends to use it on upcoming service replacements. 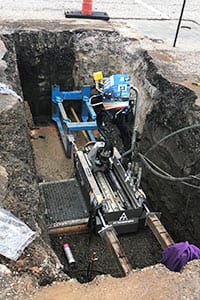 Carter said customers have been very receptive to the infrastructure work and he attributes that to their in-house program.  He said, “Because we’re in-house, we have good contact with our customers.  It’s not like a contractor trying to make arrangements with our customers.  Almost our entire customer based has signed up for e-mail alerts through our “Notify Jo-Co” system. We can send out e-mail or computer generated notifications to our customers and know they will receive them.”

Reaction to trenchless pipe bursting has also been very positive.  Carter said, “The first kind of feedback we get is usually, ‘Oh what’s that?’  But by the end of the job, once they understand what’s going on, they are very pleased that we did not tear up their driveway or landscaping.  As we move from street to street, we’ve had the neighbors from the street we just finished telling the next group of neighbors about the process and pointing things out.  Really positive customer engagement.”

Underground Construction Company, Inc. Doubles Down with Trenchless Tools and...

Pipe Bursting on the North Shore: The City of Duluth’s Productive In-House...
Scroll to top