The 500 ft (150 m) of new HDPE is fused to the pipe bursting tool with a McElroy pipe fusion machine.

Water is a valuable commodity. Just ask Mike Grahek, contract administrator at the Los Angeles Department of Water and Power, Pipeline Rehabilitation Group. Since 1994, the LADWP has spent an average of $40 million a year on rehabilitation of potable water linesÑapproximately $110,000 a day. With replacement of lines, the total soars to $80 million.

The department is doing everything it can to live up to its mission statement: “…to deliver a dependable supply of safe, quality water to our customers in an efficient and publicly responsible manner.” That means meeting capacity issues, replacing deteriorated lines when they have to and rehabilitating lines when they can.

The LADWP, headed by William Mulholland, became a city agency in 1902. Back then, as a provision for receiving water service from the LA Municipal Water System, the recipientÑbe they individual or governmentalÑneeded to be part of the city. Over the next 40 years, the areas surrounding Los Angeles annexed themselves to the city. Today, the LADWP serves a 468-sq mile (1,216-sq km) territory, maintains 7,200 miles (11,520 km) of pipeline and is the largest municipal water provider in the United States.

The LADWP utilizes many different technologies to meet the needs of 3.6 million customers. Grahek said, “We’re not married to any one specific technology. Some work better than others in certain situations. We don’t try and restrict ourselves. We use what works.” For a job this past January, on the highway named after the LADWP’s first administrator, Mulholland Drive, pipe bursting was the method of choice. 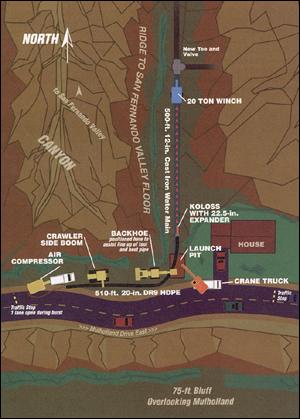 The LADWP oversees a vast network that is referred to by many as an engineering masterpiece. The water system is fueled by three major sources: local groundwater, the Los Angeles Aqueduct and purchased water that is imported by the Metropolitan Water District of Southern California. The aqueduct system attributes for almost two-thirds of the city’s water supply. According to Grahek, daily water use for the City of Los Angeles is about 700 cu ft (21 cu m) per second. That roughly translates into 450 million gal (1.7 billion L) a day.

A majority of the water delivery system-98 percent-is ferrous metal, i.e. cast iron, ductile iron and steel. Water mains range in size from 4 in. (101 mm) to 10 ft (3 m) in diameter with some installed 15 years before the turn of the century. Over 40 percent of the lines were installed prior to 1939. About 80 percent of the rehabilitation and replacement work done by the LADWP is due to deterioration, the other 20 percent due to inadequate capacity.

Grahek said, “In order to maintain these lines, the LADWP has initiated a huge cement mortar lining program. However, if the line has deteriorated beyond rehabilitation or has capacity issues, replacement has to be done.” Such was the case on Mulholland Drive.

The 12-in. (304-mm) line on Mulholland Drive served as a supply main to several pump stations and tanks. In case of a large fire, like the ones associated with the Santa Anna winds, that line would supply the needed water. According to Grahek, the line was no longer meeting capacity needs. That meant two things. First, a line of this importance would have to be replaced. Second, the line could not be out of commission for a long period of time, in case of a fire.

Located on an easement in the hills between Bel Air and Encino, the water main ran downhill at a 45-degree angle. Grahek said, “As far as site access goes, this is one of the most difficult in our territory. That’s why we went to pipe bursting. We didn’t want to attempt trenching a hillside.”

Pipe bursting this line was not going to be easy either. Grahek turned to Dave Arthurs, pipeline rehabilitation manager for ARB Inc. of Lake Forest, Calif., and Collins Orton, pipe bursting product specialist from TT Technologies, Aurora, Ill., to provide the technical expertise needed to accomplish this job.

Finding room to stage the 500 ft (150 m) of pipe product was difficult. Only one lane of traffic was closed.

During the bursting process, the pneumatic tool, guided by a constant tension winch, travels through the original line. As it moves through, it effectively bursts apart this “host” pipe, displacing the fragments into the surrounding soil while simultaneously pulling the new pipe. Orton said, “Advances in tool/expander configuration and guide head (schnozz) technology over the last 10 years has made jobs like this possible.”

Grahek said, “I don’t know if there is a perfect rehabilitation or replacement method for this particular job, but pipe bursting was the best choice. Put it this way, if it wasn’t for pipe bursting, a job like this would not be attempted.” (See Diagram A)

The burst ran from the top of the hill to a tee located 500 ft (150 m) below at the base of the hillside. Positioning equipment and crew on the winding two-lane highway worried Arthurs and Orton.

Before the job could truly begin, ARB crew members isolated the existing main, separating it from the system. They excavated the pipe on both ends, then cut it. Crew members then installed isolation valves on each end which allowed them to stop the flow of water through the line. After the isolation valves were in place, the crew dug a launch pit on top of the hill and an exit pit at the base.

The next task was figuring out how to position the constant tension Grundowinch at the exit pit at the base of the hill. After exploring several options, including bringing in a helicopter and air-lifting the winch in place, Arthurs decided to tow the winch into place with a dozer.

ARB Crew members used a McElroy pipe fusion machine to fuse together the 40-ft (12- m) sections of Plexco HDPE until they reached the required 500 ft (150 m). The air compressor hose was threaded through the inside of the new pipe in order to power the 14-in. (355-mm) diameter Grundocrack Koloss pipe bursting tool from TT Technologies. Finally, the new HDPE was fused to the pneumatic bursting tool.

Authors said, “To achieve the 90-degree turn into the launch pit and position the tool on line for the 45-degree grade of the hillside, we elevated sections of the pipe with boom trucks. This also aided in minimizing traffic disruption.” Pipe slings held the pipe above the ground, while pipe rollers were used on the ground to help reduce pipe drag.

Orton said, “Keeping the tool from jumping out of the host pipe on such a steep grade was tricky. The use of a guide head, or schnozz, helps the pneumatic bursting tool stay within the host pipe.” A special schnozz was fabricated on site and attached to the front end of the bursting tool. (See Diagram B) After several days of prep work, the burst was about to begin.

ARB crews considered using a helicopter to position the Grundowinch at the base of the steep hillside.

The Koloss, equipped with a 22.5-in. (571-mm) rear expander, was maneuvered into place and began moving through the host pipe. The ARB crew encountered no difficulty with the sandy loam soil. Soil conditions can mean the difference between bursting success and failure. To compensate for difficult conditions, bentonite lubrication is often used. No lubrication was needed for this job despite the very large diameter of the new pipe.

Arthurs said, “From a job site and access stand point, this was definitely a tough bursting project. Once everything was in place, however, the actual burst went as smooth as any of us could have hoped for. I was concerned about existing anchor blocks, but the tool just powered through them. We were all very happy”

Grahek was pleased with the results of the burst. “With additional capacity that a 16-in. (406-mm) ID line gives, we will be better able to meet the flow requirements of our pump stations and reservoirs on all levels, especially in case of a fire or other emergency. We plan to do a hydraulic study, and depending on those results, we could be back here “

Grahek estimates the LADWP’s use of pipe bursting will increase yearly by about 10 percent. Their usage of other rehabilitation and replacement techniques is also anticipated to increase. That’s no surprise from the largest water municipality in the United States.

Contractor bids to replace over 16,000 feet of failed sewer line with minimal...