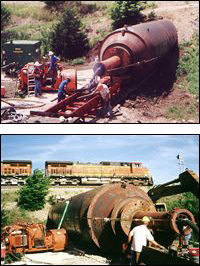 Risky or experimental projects do not attract many contractors. However, like any other endeavor, there are those who are confident enough in their abilities and their equipment to take on difficult, challenging or even impossible projects. These are the contractors and projects that push the envelope of equipment and technology performance, and provide valuable information to equipment manufacturers, engineers and the general construction population. Middle Creek Mining Corporation, Peabody, KS is one such contractor that recently wowed the underground construction industry with a pair of world record setting pipe rams.

Middle Creek Mining President Frank Oursler is no stranger to difficult jobs. He has seen his fair share of challenging soil conditions, complicated projects and difficult working situations. But the two giant casing installations near El Dorado, KS, not only pushed the limits of his pipe ramming equipment, they set new standards by which all other large diameter pipe rams are measured.

Oursler said, “We were approached by the city of El Dorado to provide suggestions on the installation of two large-diameter casings under the Burlington Northern/Santa Fe railroad right-of-way. The casings were 118 inches in diameter and 138 inches in diameter. We have been pipe ramming for several years, and I suggested that method as an option to the city engineers. They eventually accepted it.”

He said, “I’ve worked on a couple of 72-inch diameter ram jobs in the last few years. And I believe, before the Middle Creek job, that the largest diameter casing installed was right around the 72-inches. We fully expected the next leap in diameter to be around 80 to 84 inches. I don’t think anyone saw 118-inch and 138-inch installations occurring so soon. The tools to complete that type of project are out there, but a lot of it has to do with a contractor like Middle Creek having the fortitude to attempt it.”

For the El Dorado jobs, Oursler chose Permalok steel casings. Often times during a ramming or a jack and bore project, welding casing segments can take many hours of production time. According Permalok President Mike Argent, Permalok casings employ a simple mechanical press fit design that provides a strong, quick connection between casings as an alternative to welding.

Between 100 and 120 trains travel the Burlington Northern/Santa Fe mainline through El Dorado each day. Expansion of the local golf course and hiking and biking trails in the area necessitated an easy and safe way to cross from one side of the tracks to the other. With the extreme amount of train traffic, safety alone precluded an above-ground crossing. Large-diameter casings under the tracks were the best solution.

The first ram created what became known as the south tunnel. Five 21-ft segments of Permalok casing were delivered to the job site. When rammed in place, these segments would create a safe and stable 89-foot long tunnel below the tracks.

The second pipe ram took place approximately 1/4 mile north of the first one. This ram was even larger; 138-inches in diameter covering 148 feet. In addition to providing golf course patrons and area recreationalists safe passage under the rail line, this tunnel would provide a crossing for two utility mains. New 8-inch water and sewer lines were to be installed along the bottom of the casing. Concrete flooring would protect the mains and provide a flat surface for travelers. The stage was set for two world record rams.

After receiving all the necessary equipment and materials, Middlecreek’s crew, led by Project Superintendent LaRue Nolen, set up and began ramming. At the start of the first ram a 20-inch pneumatic ramming tool was used, but slow progress and other difficulties prompted a change of tools. Mike Schwager was contacted, and the 24-inch diameter Grundoram Taurus was brought in to continue ramming.

Schwager said, “The initial tool configuration of segmented ram cones could not stand up to the amount of stress placed on it. Mike Argent at Permalok was able to fabricate a 118-inch pipe adapter that resembled an inverted bell. This configuration proved much more successful. With large diameters like this, it’s a learning experience. Everyone gained valuable knowledge.”

Ramming continued at a much greater pace. The Grundoram Taurus rammed an average of six feet per hour at the start of the job despite being operated at less than full power. Jacking cylinders and a frame were used to support the pipe and put an addition 200,000 lbs. of push force against the back of the fabricated pipe adapter. After each segment was rammed in, mini excavators were used to clean out the spoil. Finally, the Middle Creek crew rammed the last segment in place. A new pipe ramming diameter record was established, but that was just the beginning.

The combined weight of the installed sections of pipe topped 323,000 pounds.

Armed with valuable information from the 118-inch diameter ram, Nolen and the Middle Creek crew set to work on the giant 138-inch job. In preparation for this larger bore, steel rails provided by the railroad were laid on the line and grade at the foot of the right-of-way. The rails were then embedded in concrete. At the rear of the rails, a large push block was constructed. The push block had steel walls on three sides and was reinforced with steel cross bracing. The box was then filled with concrete and allowed to harden for two weeks.

Nolen then placed twenty feet of auger track just in front of the push block and arranged the jacking cylinders to allow them to push against the back of the 118-inch fabricated adapter cone from the previous ram.

Again Mike Argent at Permalok was called upon to fabricate a reducing cone to bridge the 138-inch casing diameter and the 118-inch adapter cone diameter. The Bor-It auger machine’s hydraulic pressure was increased to provide an additional 500,000 lbs. of push force. Another air compressor was also brought in to ensure the Taurus operated at its 1,766 cfm full capacity.

The pipe provided by Permalok had an O.D. of 138 inches and a 1.5-inch wall thickness. Each section was 21 feet long and weighed 2,187 lbs. per foot. When complete, the installed sections combined weight topped 323,000 pounds.

Oursler said, “We’ve been using this pipe for several years and we’re very pleased with it. It would have taken two to three days per connection longer had we had to weld it. They [the casings] slide together and lock from the pressure. They have lock rings manufactured on them and the pressure of the pipe rammer and boring machine push them [the segments] together.”

Two CAT EL 300B excavators were needed to lift and position each casing segment on the rail before ramming. The Middle Creek crew also used a Straightline bentonite pump to deliver a polymer lubricant to the lead edge of the ram through two 1-inch supply lines.

The Ram Is On

A special adapter cone was fabricated to connect the 138-inch casing with the 24-inch diameter Grundoram Taurus.

Ramming began at a furious pace with the first 21-foot section taking only 40 minutes to install. The next 15 feet were in place in approximately 75 minutes. As the weight of the pipe segments and the soil inside them increased, ramming times increased significantly. At this point, Nolen removed the soil in order to help ramming production return to previous levels.

Over a period of 12 days, the Middle Creek crew rammed in segments of casing and cleaned out the spoil. Spoil was removed from the casing with a Case 1845 C skid steer and a Yanmar D 27 mini excavator. At noon on the 13th day of ramming, the final casing was installed and the spoil removed. Over 140 feet of 138-inch diameter steel casing was in place. Ramming times averaged three to four feet per hour. A new benchmark in pipe ramming was set.

The El Dorado pipe rams have created a lot of excitement in the industry. According to Schwager this amazing feat could be repeated or bested in the future. He said, “Combining the world’s largest pipe rammer with auger bore technology definitely helped this project succeed. The equipment is out there. For skilled and adventurous contractors like Middle Creek, there are no records that cannot be broken.”